Hawks erupt in 2nd half, dismantle Cougars by 30

Flaugh uses his size, power to run over Manson-NW Webster for 156 yards and 4 TDs 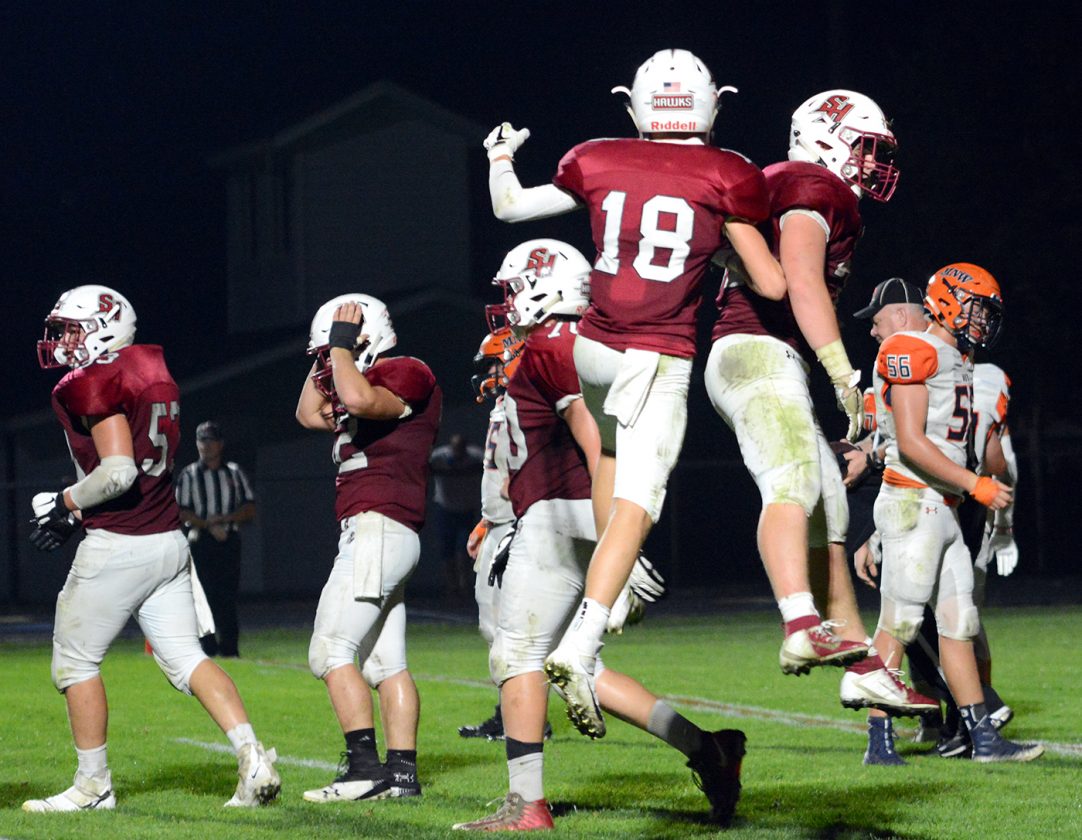 South Hamilton’s Brandyn Feighner (14) looks for a cutback angle after reaching the sideline during the third quarter against Manson-Northwest Webster on Friday in Jewell. A big second half propelled the Hawks to a 36-6 blowout homecoming victory. DFJ photo/Tracy Queen

JEWELL — Coming out of his stance at a stocky 231 pounds, South Hamilton fullback Cade Flaugh gives as good as he gets when contact is made.

Defenders might not flinch the first time they meet Flaugh. They might handle it just fine on the fifth meeting too. But by collision Nos. 10, 11, 12 and beyond, the South Hamilton senior has taken all of the fun out of it.

The Cougars wanted no part of hitting Flaugh by the time the second half rolled around and he led a 30-point outburst that allowed South Hamilton to pull away for a 36-6 homecoming victory.

Flaugh rushed for 156 yards and four touchdowns on 21 carries between the tackles, and the Hawks’ offensive line — Jeremiah Smith, Colton Willis, Dominic Summers, Dawson Mueggenberg and Cade Balvanz — along with tight end Austin Busch controlled the point of attack to sap the Cougars over the final 24 minutes. 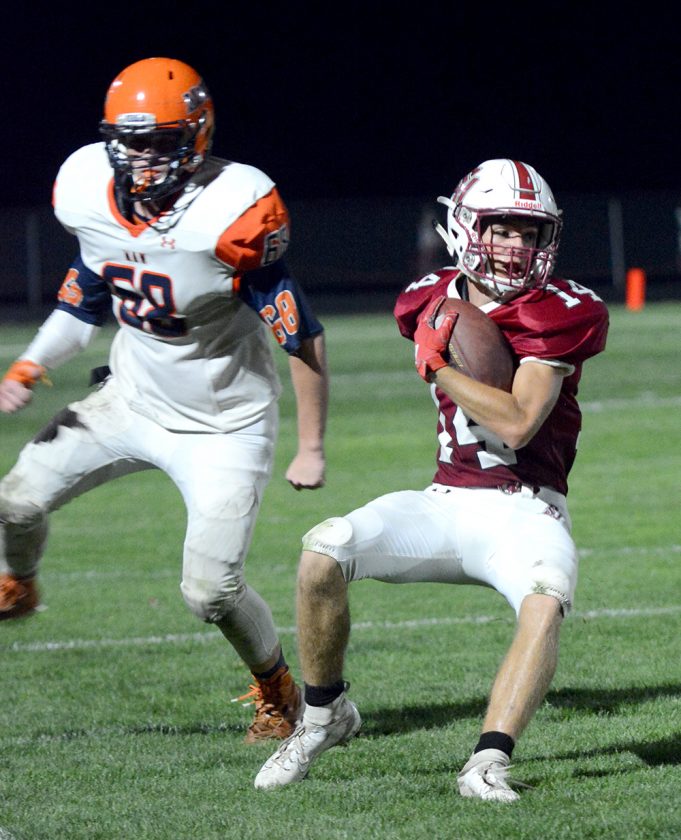 South Hamilton’s Brandyn Feighner (14) looks for a cutback angle after reaching the sideline during the third quarter against Manson-Northwest Webster on Friday in Jewell. A big second half propelled the Hawks to a 36-6 blowout homecoming victory. DFJ photo/Tracy Queen

“(Flaugh) ran the ball extremely well … what we want out of him is he gets a lot of carries, but he’s also the guy that wears down the defense because he’s a big body and hitting him 20 or 30 times is a chore,” South Hamilton head coach Corey Klemp said. “The offensive line, those guys really had a nice game as well. They were a big part of wearing down Manson.”

South Hamilton’s physical style on both sides of the ball turned the tide. An everything-that-could-go-wrong-did-go-wrong first quarter and a not much better second quarter led to a 6-0 halftime lead for the Hawks. But they answered with a safety and four touchdowns over the initial 22-plus minutes of the second half.

“We’re built to be a physical team where we wear you down and then the floodgates open,” Klemp said. “The kids really responded well in the latter half of the second quarter and we started doing some things well. Then in the second half we kind of just took off.”

Hawks’ punter Tycin Barkema pinned Manson-Northwest Webster (1-3) at its own 1-yard line early in the third and one play later Dominic Summers threw Cougars’ running back Brayden Johll to the turf for a safety to ignite the scoring outburst. 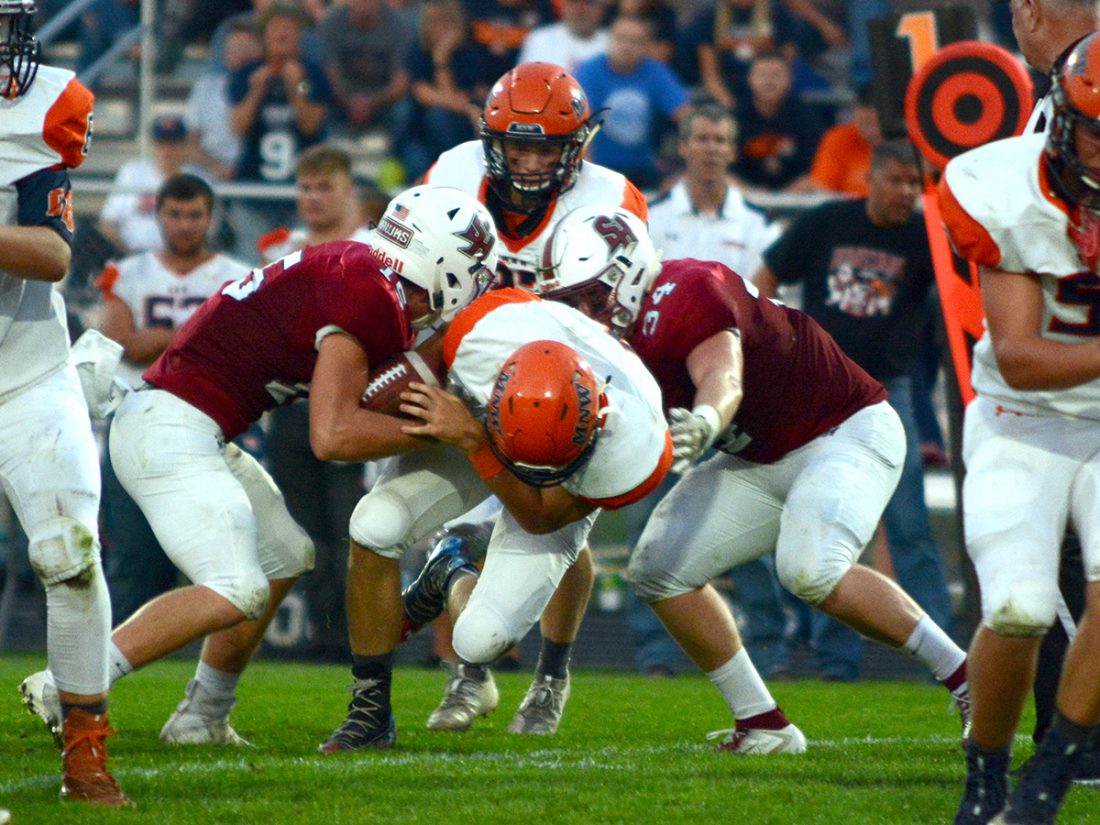 Summers and Smith anchored a dominant performance by the Hawks’ defensive line. They combined for 10 tackles, including 51⁄2 tackles for loss and 21⁄2 sacks. Manson-Northwest Webster had just 21 rushing yards prior to its final drive of the game against South Hamilton’s reserves.

Brock Galetich picked off Cougars’ quarterback Austin Anliker twice, one of which he returned to the 2-yard line to set up a Flaugh touchdown. Lane Swenson also recovered a fumble and blocked a punt.

Manson-Northwest Webster, which hadn’t scored since a Week 1 win over Ogden, avoided a third consecutive shutout with 2:03 remaining on a 10-yard run by Johll. He rushed for 77 yards, 53 of which came on the scoring drive. 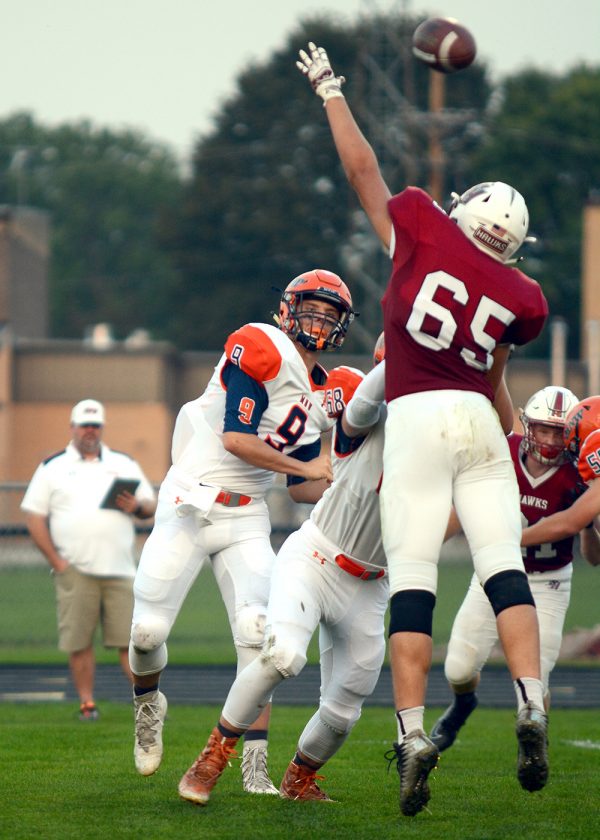 South Hamilton now takes a healthy dose of momentum into its Class 1A District 2 opener at Madrid on Friday. Klemp says he expects all-district linebacker Trevor Thompson to return to the field as well after he missed back-to-back games with a high ankle sprain. Thompson was also the Hawks’ leading rusher before he was sidelined.

“We feel pretty confident we’ll have him back this week,” Klemp said of Thompson. “It will certainly be good to have him back.”

Madrid (0-4) has lost 13 consecutive contested games dating back to the end of the 2017 season. The Tigers’ lone win over that span was a forfeit victory over Eagle Grove a season ago. So far this season they’ve been outscored 209-15.