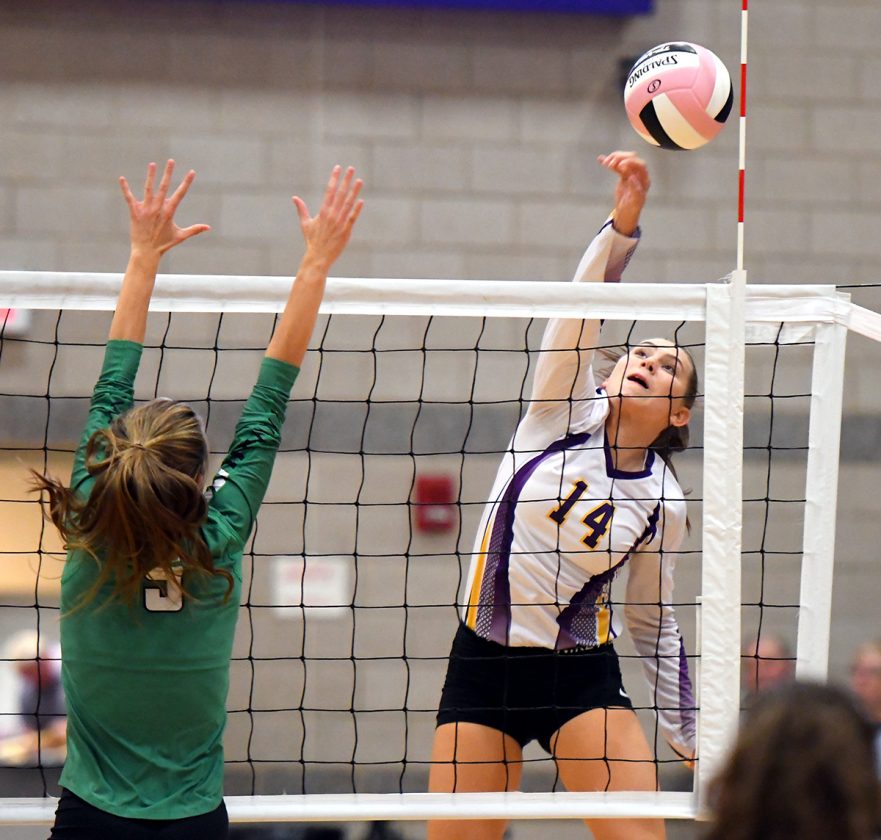 Webster City hitter Adalie Schwandt (14) rips a kill from the outside during the first set against St. Edmond last night. DFJ photo/Troy Banning

WEBSTER CITY — Jess Howard doesn’t unleash the “glare of scare” during every match, but when she does you know she’s somewhere between unhappy and smoke close to pouring out of her ears.

Webster City’s head volleyball coach gave her players the look several times last night inside the WCHS gymnasium, and they quickly got the message.

Dominant early, caught in a lull during the middle stretch, and back in control late, WCHS collected its third straight North Central Conference victory, 3-1, over Fort Dodge St. Edmond.

But Howard wasn’t overly joyous following the match, not after her group squandered a chance to sweep and then nearly blew a 13-point lead in the fourth set. Her irritation came from what she saw as a lack of aggression from her players, particularly in the front row. 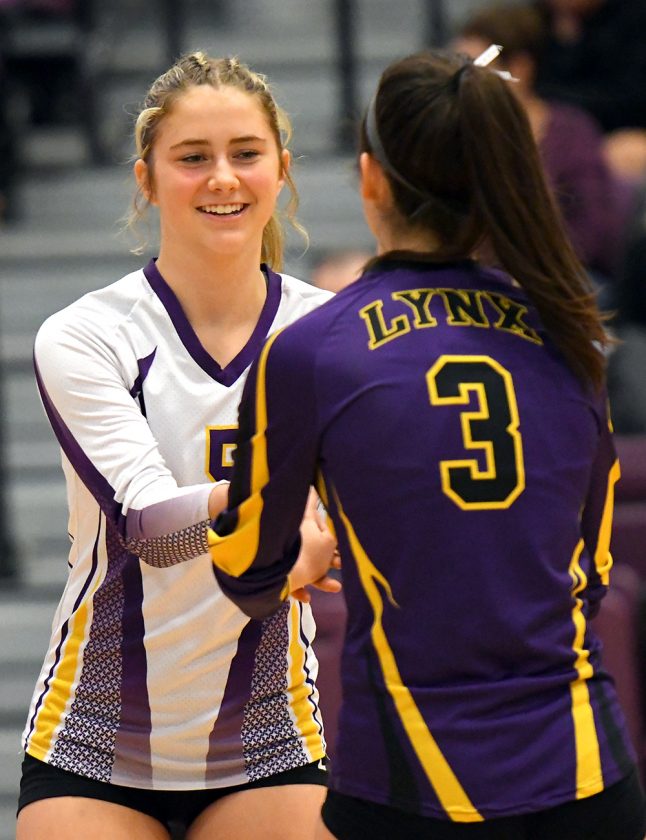 Still, to get through the middle portion of the conference schedule unscathed puts WCHS (14-8, 3-1 NCC) in position to contend for the league crown over the final month of the season. The Lynx have the heavyweights and defending tri-champions — No. 8-ranked (Class 2A) Clarion-Goldfield-Dows, No. 12 (3A) Humboldt and Iowa Falls-Alden — remaining on the docket.

“We’ve seen a lot of different competition as we’ve gone through the year and hopefully all of the teams we’ve gone up against will get us ready for that last half of the season.”

Schwandt, a senior middle attacker, rolled her ankle in the opening set, but quickly returned and played a big role in the Lynx taking a 2-0 lead. She and Gallentine both ripped four kills in the first set, which saw the two teams battle to seven ties with three lead changes. WCHS moved in front for good, 19-18, on a Gallentine smash, while Foster and Schwandt finished it off with back-to-back kills.

WCHS fed Schwandt consistently throughout the second set, particularly during the team’s closing 13-1 run. She finished with six kills, three coming in succession from the left side to push the lead to 23-11. 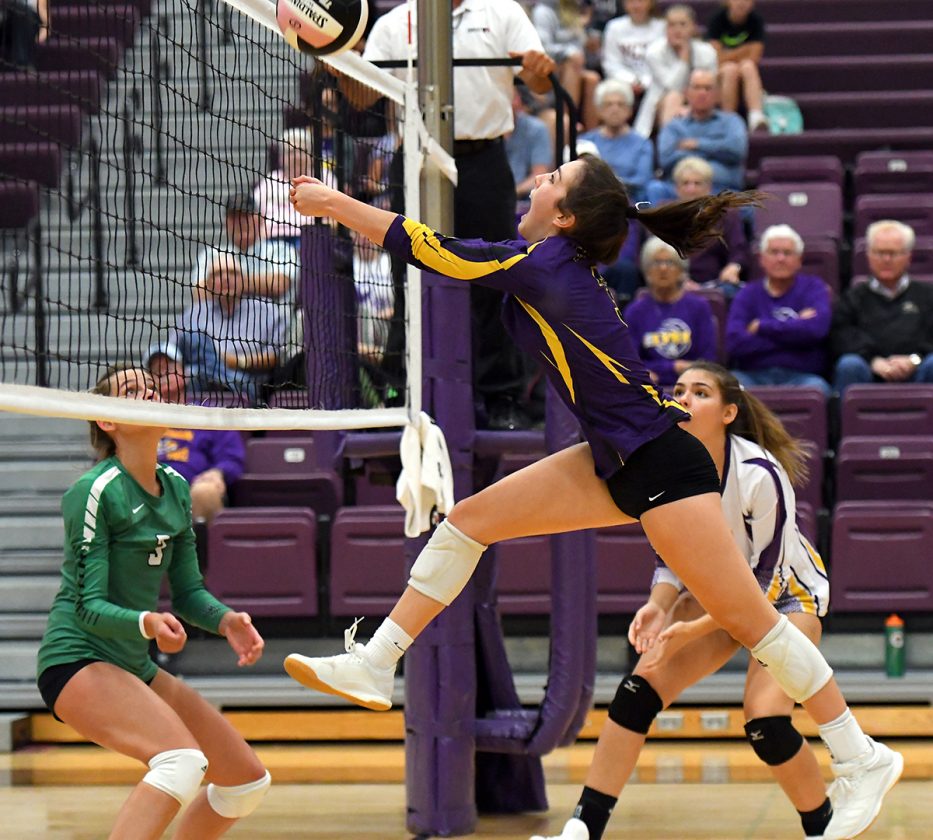 WCHS libero Alayna Finucan races in towards the net to keep a rally alive during the second set against St. Edmond last night. The Lynx fended off the Gaels in four sets, 3-1. DFJ photo/Troy Banning

The Lynx led 14-11 in the third when the wheels started to come off. St. Edmond found its block and eventually gained the upper hand. WCHS briefly knotted it at 21, but never retook the lead.

Alayna Finucan, the leader in digs in 4A and the Lynx sophomore libero, got the fourth set off on the right note with an ace, and she added two more on her next turn behind the service line to help push WCHS out to a 14-6 lead.

Hoversten went on a kills binge to carry WCHS out to a 22-9 cushion, but once again it allowed St. Edmond to crawl back into the bout. The Gaels got as close as four points twice, but Gallentine finally put the match on ice with a kill from the perimeter.

“The setters did a good job of distributing the ball,” Howard said. “There are a few instances where we’re just not sure where the hitters are, but they’re doing a good job with the quick offense.” 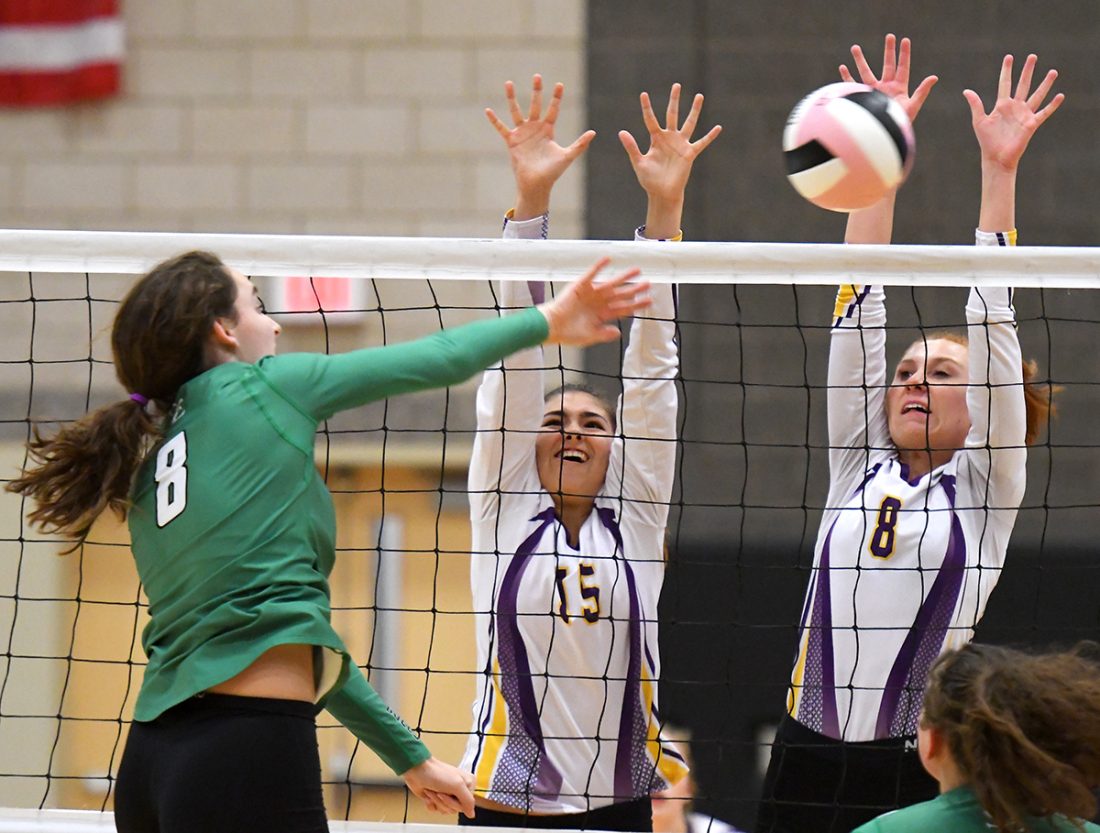 Finucan was her usual masterful self in the back row with 29 more digs, and she also collected the team’s only four aces. Foster finished with 23 digs, Gallentine had 18 and Schwandt chipped in 13.

Webster City hitter Adalie Schwandt (14) rips a kill from the outside during the first set against St. Edmond last night. DFJ photo/Troy Banning

WCHS libero Alayna Finucan races in towards the net to keep a rally alive during the second set against St. Edmond last night. The Lynx fended off the Gaels in four sets, 3-1. DFJ photo/Troy Banning