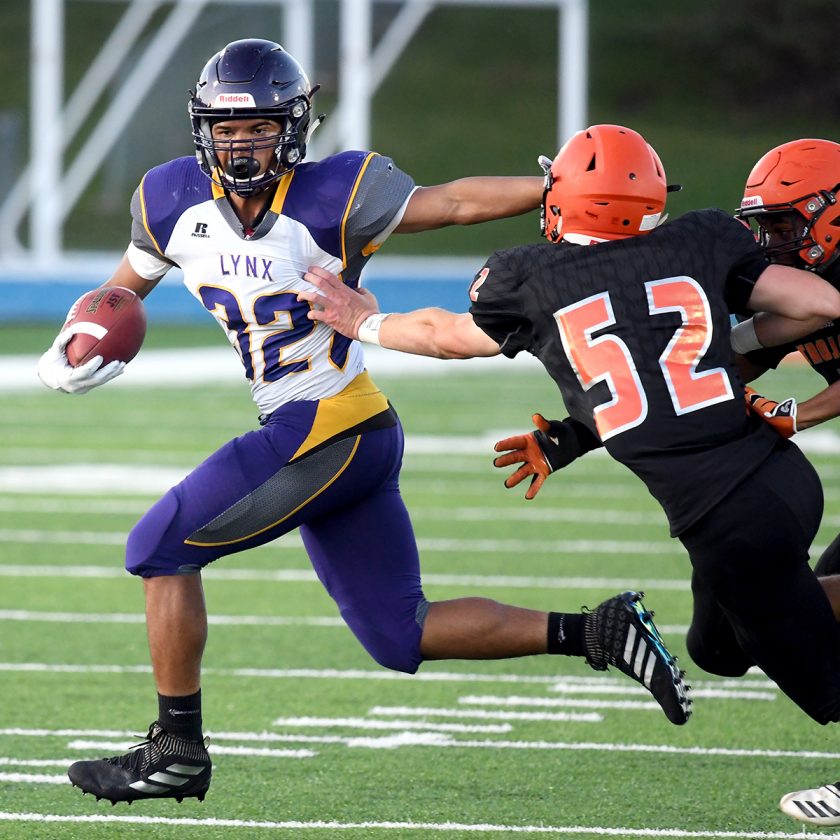 WCHS tailback Trey Mathis (32) throws a stiff arm at Waterloo East’s Jacob Hanley (52) during the first half on Friday in Waterloo. Mathis rushed for 183 yards and four touchdowns in the Lynx 48-32 win over the Trojans. DFJ photo/Troy Banning

WATERLOO — There’s no dome around Memorial Stadium, but it sure looked like an arena game broke out on the turf field Friday night.

Defensive stands were as rare as a bloody steak, as Webster City and Waterloo East combined for 757 yards of offense — the total topped 1,000 yards if you throw in returns — and 12 touchdowns in a non-district contest that looked like it would be a blowout early before it tightened considerably over the final three quarters.

WCHS scored 21 points over the opening 6:48 to take a three-touchdown lead and then held on by its fingernails over the remaining 41-plus minutes to secure a 48-32 victory. Trey Mathis’s fourth rushing touchdown of the night, a 31-yard burst around the left end, with 24 seconds remaining finally put the freakishly athletic Trojans away.

“We definitely thought it was going to be easy at first, but obviously they have a lot of good athletes and they showed us if we let our guard down that they can come back,” WCHS senior offensive and defensive lineman Will Tasler said. “This shows us we need to keep pushing hard and not let up.”

Mathis abused the East defense for 183 yards and the four end zone excursions on 25 carries, and Garrett Whitmore turned on the jets for 130 more yards rushing and two touchdowns. He also caught a touchdown pass from spinback Gabe Humphrey. 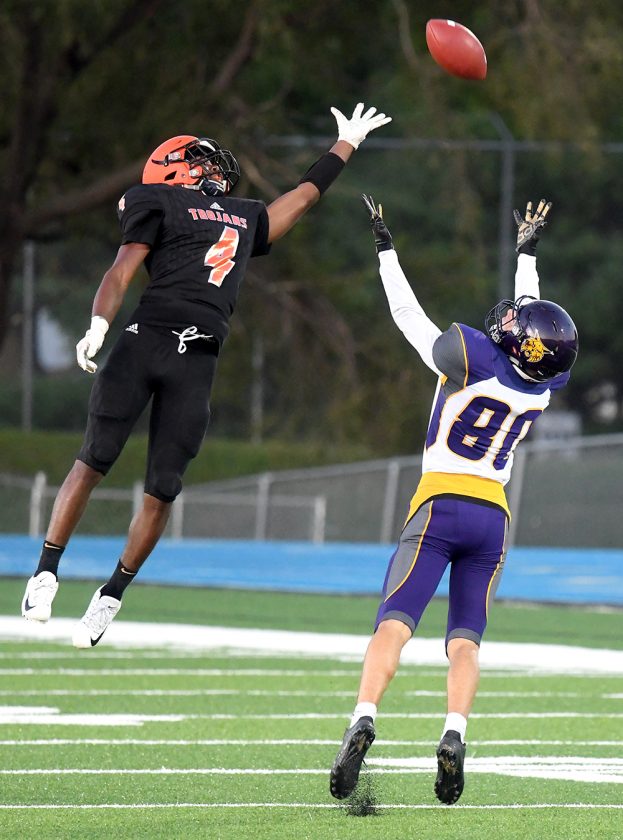 WCHS cornerback Tyler Olson (80) comes up with the first of his two interceptions over Waterloo East’s Ramir Scott on Friday. DFJ photo/Troy Banning

WCHS (3-0) churned out a season-high 338 yards on the ground and 406 in all. And they needed every single one of them to stay just a step ahead of East’s potent aerial assault.

“We played well other than one or two offensive series,” WCHS head coach Bob Howard said. “(Whitmore) and Mathis are a real good one-two punch, and Gabe Humphrey played by far his best game. He ran the ball well (11 carries for 25 yards) and he completed passes (3 of 6 for 68 yards) where he had to find the receiver.”

East (0-3), which has now lost 18 consecutive games dating back to September of 2017 and is 2-55 since the start of the 2013 campaign, received 280 yards passing from quarterback Dylan Reyes, who completed 22 of 40 throws, three of which went for scores. But he was also intercepted three times; Tyler Olson came up with two of them, giving him five on the season, and Malachi Montes stepped in front of a Reyes deep ball late in the first half.

WCHS limited East’s bruising tailback Kjuan Owens to only 45 yards on 11 totes, and Reyes accounted for just eight rushing yards, but his ability to evade pressure played havoc with the Lynx defense. He constantly wiggled out of harm’s way and bought time for his bevy of receivers to get open. Tyrell Newman was on the receiving end of 10 Reyes throws that covered 172 yards and led to three touchdowns.

In two career games against WCHS, Newman has 12 catches for 316 yards and four TDs. 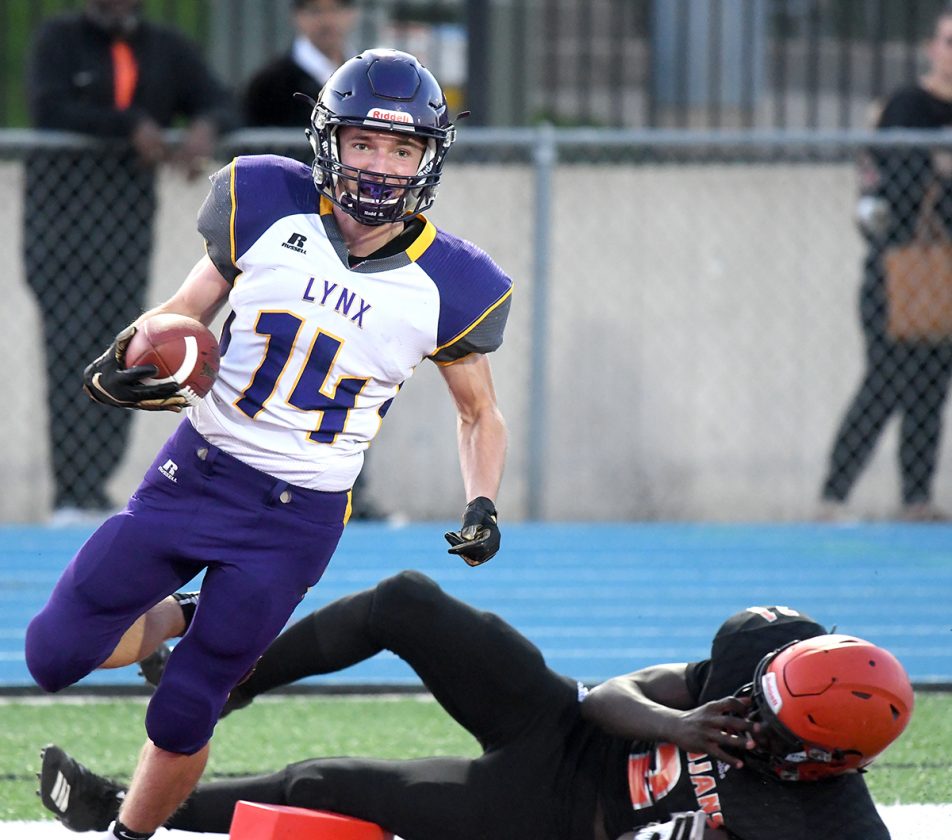 Garrett Whitmore (14) breaks out in a smile after crossing the goal line on a 29-yard touchdown reception in the first quarter against Waterloo East on Friday in Waterloo. He also rushed for 130 yards and two more scores in the Lynx 48-32 win. DFJ photo/Troy Banning

“That’s one really good team,” Mathis, who also made 41⁄2 tackles, said. “They had really good receivers, their running back is big and their quarterback can scramble really well.”

Mathis scored on a pair of 5-yard runs, and Whitmore’s 29-yard connection with Humphrey gave WCHS the early 21-0 lead. The second and third scores came following East turnovers, two of its five on the night.

Through three games, the Lynx have scored on five of their seven first-quarter possessions.

“For the second week in a row we appeared to be ready to play and that was big obviously,” Howard said. “We needed to score every one of those points. But with an inexperienced team like we have, when you get up like that, it’s really easy to get flat and think the game’s over.”

Mathis ripped off a 32-yard sprint to the house early in the second quarter, but back-to-back scoring drives by East trimmed the Lynx lead to 27-18 with 2:37 left in the half. WCHS received a much-needed boost on its ensuing drive when Whitmore took a hand-off and blazed by the Trojans down the East sideline for a 54-yard touchdown. 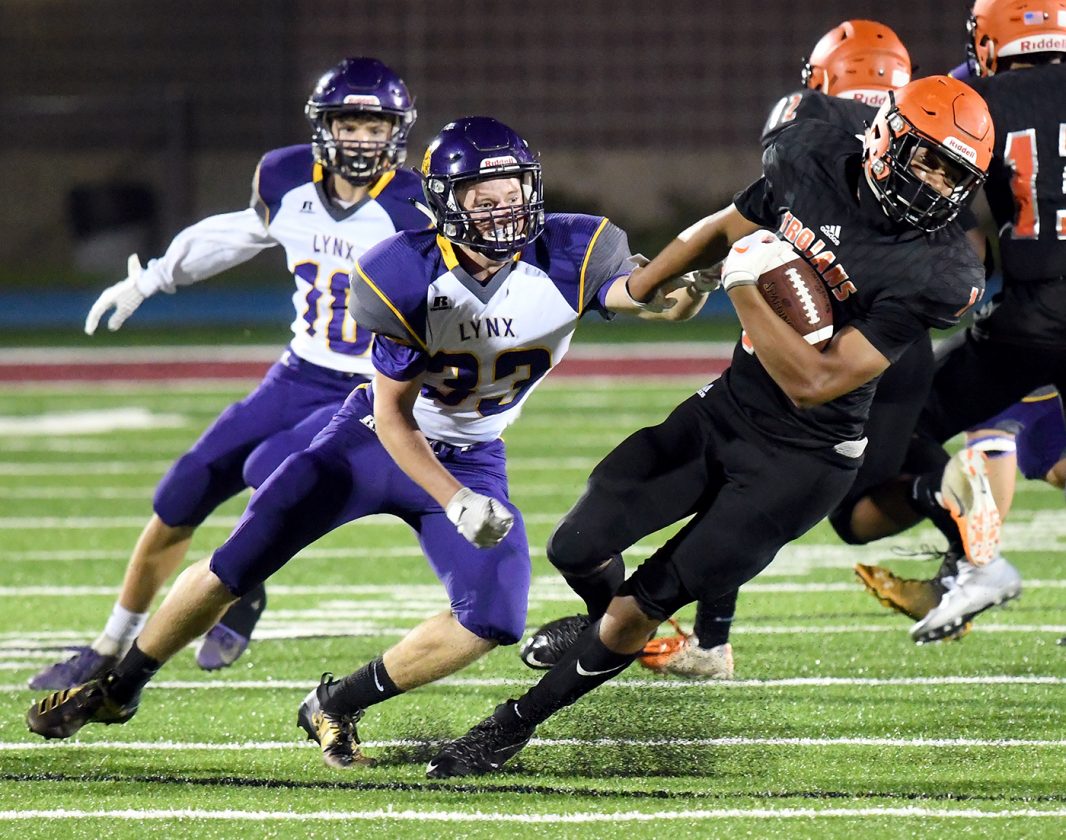 “That surprised me a little bit, but Will (Tasler) managed to block two guys with one motion,” Whitmore, who also broke off a 35-yard touchdown on a fourth-and-6 reverse late in the third quarter, said. “It was a perfect block, kind of like Moses split the seas.”

East went 90 yards to the end zone on the opening possession of the third quarter, and added a 91-yard touchdown drive on only six plays in the fourth quarter. Trailing 41-32 following a 27-yard strike from Reyes to Newman, the Trojans had a chance to get within one possession, but dropped a wide open two-point pass in the corner of the end zone with 7:56 to go.

East got the ball back with 4:02 remaining and pushed towards midfield, but on fourth-and-7 Lynx freshman defensive back Ty McKinney made a tackle short of the sticks to effectively send the Trojans to the showers. McKinney had a game-high six tackles on the night, and fellow freshman Connor Hanson made five stops. Hanson had the Lynx lone sack and also a tackle for loss.

East’s first-half rally was aided by an 84-yard kickoff return for a score by Ramir Scott. Reyes’ other TD passes to Newman covered 17 and 47 yards. Reyes also hauled in an 8-yard TD from Alexander Glover when the Trojans tinkered with the Wildcat in the second quarter. 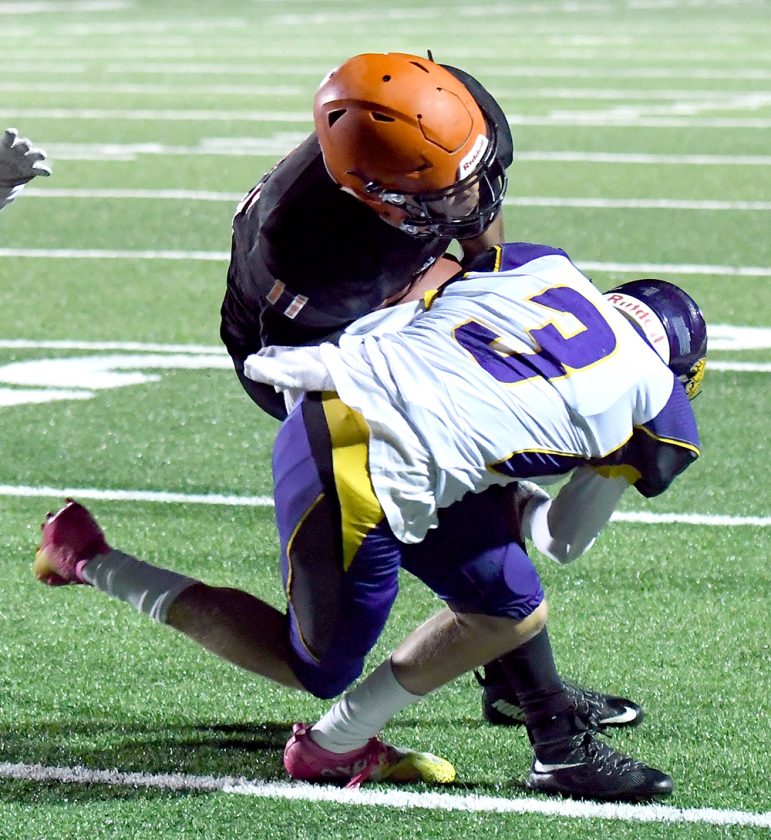 Olson and Jack Van Diest joined Hanson with five tackles in the win. Van Diest also recovered a fumble, as did Alex Ford. Olson’s second pick on the final play of the game pushed him to the stop of the state’s Class 3A leaderboard.

WCHS tailback Trey Mathis (32) throws a stiff arm at Waterloo East’s Jacob Hanley (52) during the first half on Friday in Waterloo. Mathis rushed for 183 yards and four touchdowns in the Lynx 48-32 win over the Trojans. DFJ photo/Troy Banning

WCHS cornerback Tyler Olson (80) comes up with the first of his two interceptions over Waterloo East’s Ramir Scott on Friday. DFJ photo/Troy Banning

Garrett Whitmore (14) breaks out in a smile after crossing the goal line on a 29-yard touchdown reception in the first quarter against Waterloo East on Friday in Waterloo. He also rushed for 130 yards and two more scores in the Lynx 48-32 win. DFJ photo/Troy Banning