SH takes care of Madrid for 3rd consecutive victory, sets up showdown with No. 6 Titans 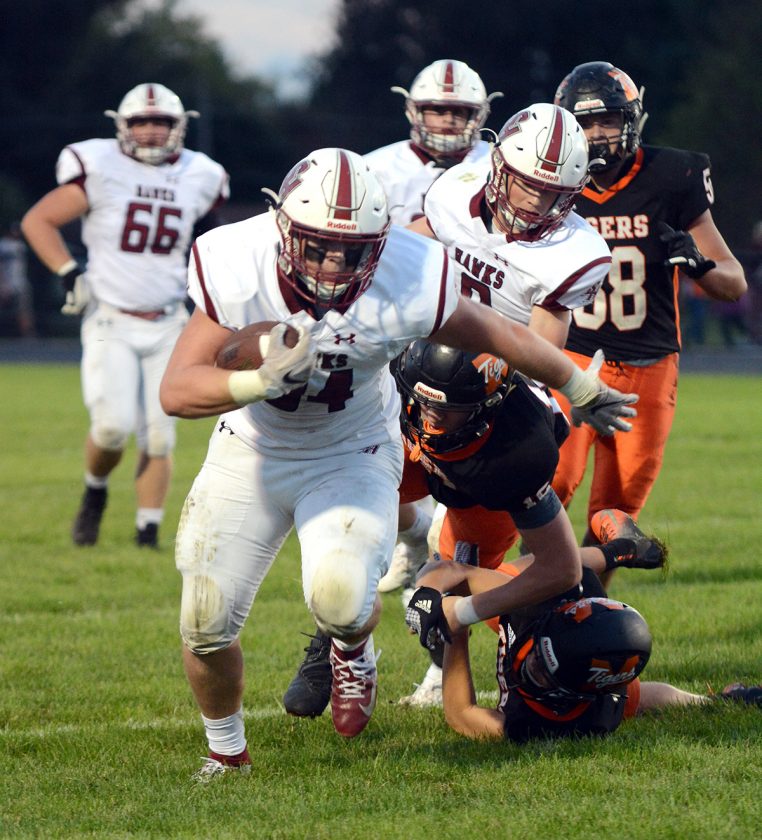 South Hamilton fullback Cade Flaugh breaks two tackles on his way to a big gain against Madrid on Friday in Madrid. He rushed for 179 yards and all four of the Hawks’ touchdowns in a 28-6 victory over the Tigers. It was South Hamilton’s third straight win. DFJ photo/Tracy Queen

MADRID — It wasn’t always perfect, but a hefty dose of Cade Flaugh, coupled with another dominant effort from the defensive line carried the South Hamilton football team to its third consecutive victory here Friday night.

Despite a couple turnovers and failing to complete a pass from the second straight week, the Hawks slowly pulled away from Madrid for a 28-6 victory in the Class 1A District 2 opener for both teams.

“I thought the offensive and defensive lines again had real solid games,” South Hamilton head coach Corey Klemp said. “But we did some things where we shot ourselves in the foot rather than getting the game a little more in our control early on.”

Flaugh, the team’s senior fullback, again carried the majority of the offensive workload with 30 carries for 179 yards and all four of South Hamilton’s touchdowns. It was his third consecutive 100-yard game and fourth of the season.

Entering the season, Flaugh expected to share the ground burden more evenly, but injuries forced Klemp’s hand and he says Flaugh has more than done the job.

“With a couple of the injuries we’ve had, he’s had to carry more of the workload,” Klemp said of Flaugh. “But he’s prepared for this. He’s been a staple in the weight room for four years … he’s got some bruises here and there, but he’s a kid that is really hitting his stride.”

Brock Galetich, the speed to Flaugh’s power, rushed for 72 yards on nine totes, and Trevor Thompson returned to the backfield for the first time in three weeks and churned out 37 yards in limited duty.

South Hamilton accrued 306 yards and averaged 5.9 yards per carry, but got nothing out of three pass attempts, something Klemp knows will have to be a focus in practice moving forward.

“Part of why we haven’t thrown the ball more is because we’ve had success on the ground, so it’s not a lack of execution as much as it hasn’t been a need or priority the last couple of games,” he said. “Our identity is running the ball, but it’s something we know we need to develop. This coming week, throwing the football is going to be really important.”

Madrid finished with 197 yards of offense. Known for years as a running team, the Tigers put the ball in the air 25 times courtesy of quarterback Colton Dean. He completed just seven throws for 92 yards and was intercepted by Galetich.

“They used to throw it 25 times, but that was in a season,” Klemp joked. “But I have to credit Madrid because they competed really hard. I think coach (Brock) Hinkel has some really good things going.”

“Those three, really on both sides of the ball, we’ve really seen the development,” Klemp said. “All of those guys are motors. They’re just battling on every play.”

South Hamilton led 16-6 at halftime on TD runs of 3 and 5 yards by Flaugh. Madrid reached the end zone for just the second time this season on an 11-yard pass from Dean to Jacob Loew.

Flaugh finished off the Tigers in the third quarter with a pair of scoring runs in a span of 96 seconds. He broke across the goal line from 3 yards out and then battled through tackles for a 38-yard excursion to the house.

South Hamilton will jump into the deep end of the District 2 pool this Friday night when it travels to Lake City to take on sixth-ranked and unbeaten South Central Calhoun (5-0, 1-0) at 7 p.m. The Titans won the district title a season ago and are the overwhelming favorites to repeat this fall.

“This is obviously a big game,” Klemp said.