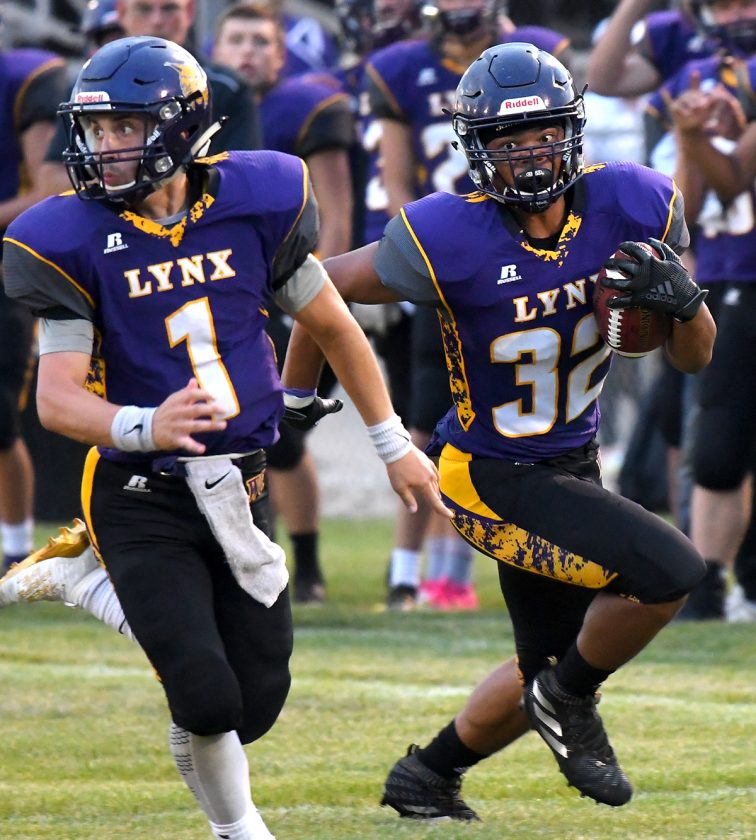 WCHS tailback Trey Mathis (32) sprints towards the end zone for a 37-yard touchdown as spinback Gabe Humphrey looks for someone to block against Gilbert on Friday. DFJ photo/Troy Banning

WEBSTER CITY — Call it intuition. Call it seeing the field. Call it going to the well one too many times. Call it whatever you want.

But what it really should have been called was ballgame.

Gilbert burned the Webster City defense with screen passes throughout Friday’s season-opening football game at Lynx Field, and with a chance to take the lead midway through the fourth quarter the Tigers went back to old reliable just outside the Lynx 40-yard line.

It was a mistake.

WCHS senior Malachi Montes read the play before the ball even left the hand of Gilbert quarterback Tanner Henningsen. Montes stepped in front of the floating pass, intercepted it at full speed and went 60 yards untouched down the sideline for a touchdown that sealed the Lynx 33-20 victory. 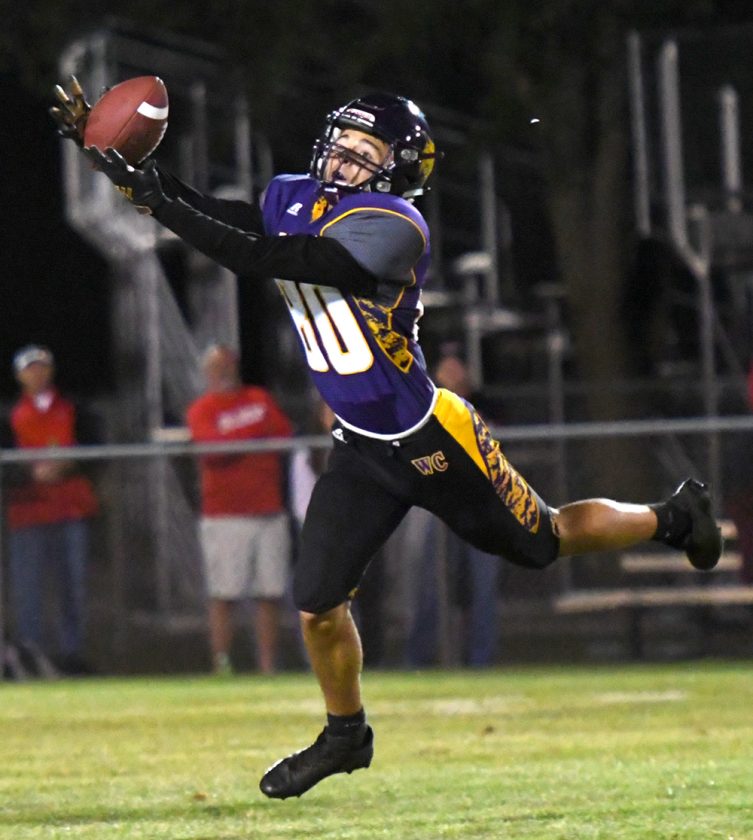 WCHS cornerback Tyler Olson lays out for the first of his two fourth-quarter interceptions during Friday’s 33-20 victory over Gilbert. DFJ photo/Troy Banning

“I knew it was coming because I saw the guy coming to crack me and then my guy went out on a bubble,” Montes said. “I just read the play and went to where the ball was going to be.”

It came just three snaps after Gilbert pulled within 25-20 on 7-yard reverse to the house by Trey Hansen and one play after WCHS fumbled the ball away at its own 41.

“That was obviously really huge because they had momentum at that time,” WCHS head coach Bob Howard said of the pick-6. “Malachi has had a great first two weeks of practice and he’s emerging as a leader.”

It was the Lynx third consecutive victory over Gilbert and fourth in the last five seasons. They earned the celebration with an explosive offense in the first half and a lockdown defense after the intermission.

WCHS (1-0) gobbled up 219 yards of offense, 171 on the ground, as it built a 25-14 halftime lead. But fatigue and a reenergized Gilbert defense resulted in just 25 total yards of offense after the break. The Lynx averaged just 1.2 yards per play over the final 24 minutes. 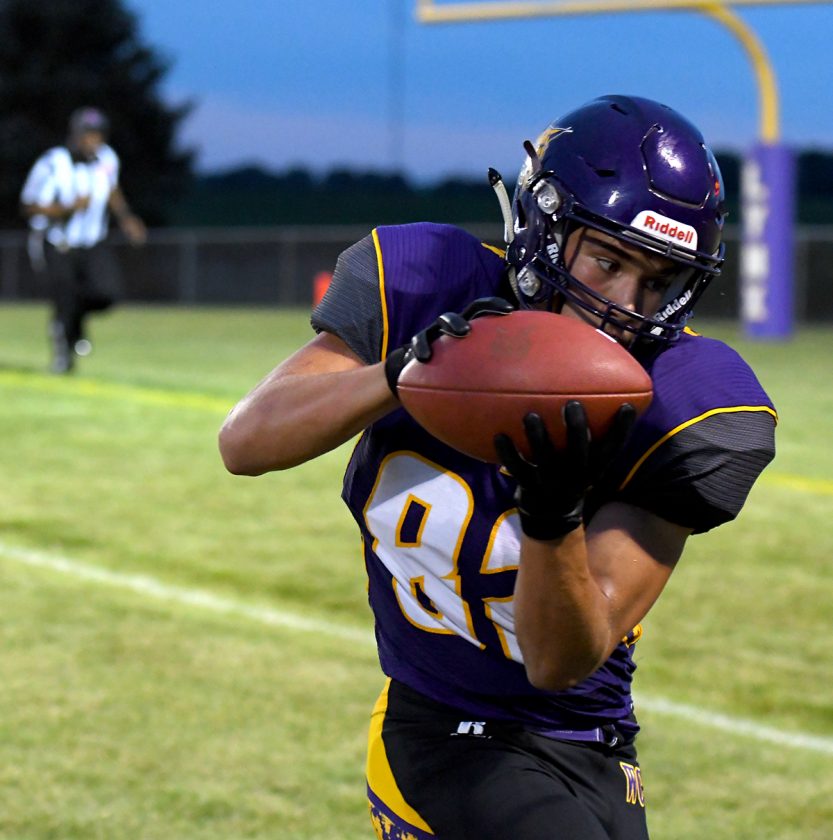 Malachi Montes hauls in a pass near the sideline during the first half against Gilbert on Friday at Lynx Field. His fourth-quarter 60-yard pick-6 secured Webster City’s 33-20 victory over Gilbert. DFJ photo/Troy Banning

“There’s obviously a lot of stuff to work on, but for as many fresh faces as were out there … they deserve to celebrate this one,” Howard said.

WCHS senior wingback Garrett Whitmore rushed for a game-high 96 yards, 45 of them coming on a sprint through the defense for a touchdown that gave the Lynx a 19-7 lead with 8:28 remaining in the second quarter. In his first start at tailback, junior Trey Mathis munched on 95 yards and reached the end zone three times on runs of 37, 5 and 3 yards.

Explosive and powerful, Mathis churned out 70 yards in the first quarter, highlighted by his long journey for the first score of the game.

“I’ve always liked running the ball and the line did great (in the first half),” Mathis said. “We were a little shaky at the end, but the defense did a good job of making sure they didn’t get the lead back.”

The Lynx offense was its own worst enemy. The new backfield, which also included spinback Gabe Humphrey, put the ball on the ground six times and lost two of the fumbles. 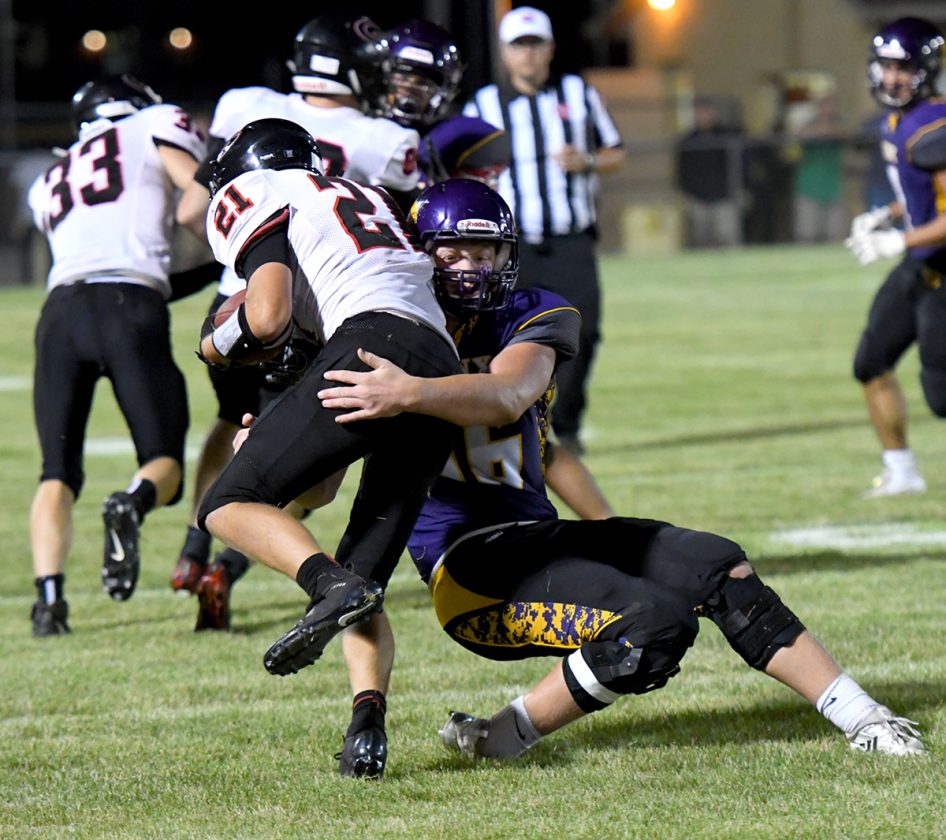 Henningsen and wideout Birk Hanson kept Gilbert within shouting distance in the first half. They hooked up 10 times through the air for 204 yards, including a 64-yard touchdown pass. Another bomb that covered 52 yards put the Tigers on the doorstep in the final seconds of the second quarter, but three straight incomplete passes in the end zone allowed WCHS to maintain an 11-point lead at the break.

“At the end of the first half we stood up and that was big,” Jack Van Diest, who had 61⁄2 tackles, said.

Gilbert’s offense took a big hit on the opening kickoff of the third quarter. Birk Hanson was injured while returning the boot and never returned. 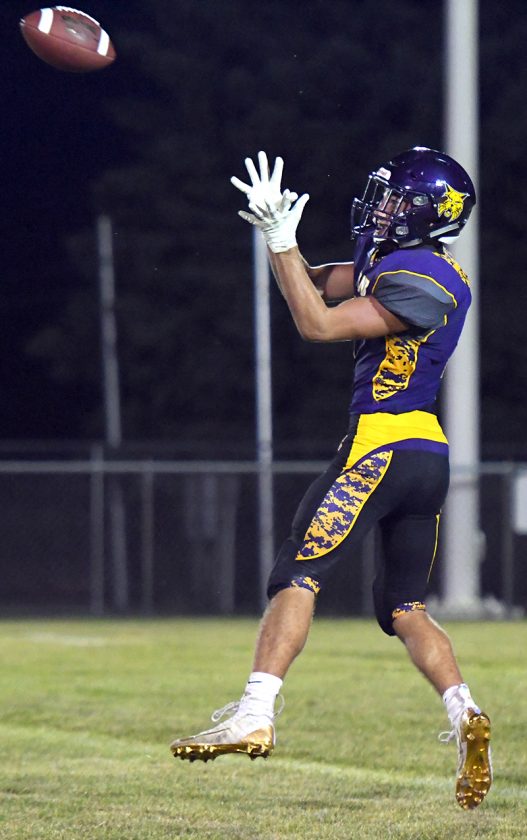 A Lynx secondary that was torched by Henningsen for three quarters had the last laugh. Cornerback Tyler Olson picked the tall right-hander off twice in the fourth quarter and gave up a chance at a third interception when he batted down a fourth-down pass with 2:32 to go.

WCHS shored up its tackling in the second half as well and essentially turned Gilbert into a one-dimensional passing team. The Tigers averaged just 3.3 yards on 35 rushing attempts.

“I was proud of that,” Montes, who made 51⁄2 stops in addition to his interception, said of the second half defensive effort. “I was glad we fixed the missed tackles and got that cleaned up.”

Mathis was a beast defensively from his middle linebacker position with a game-high nine solo tackles. Early in the second quarter he blew through the offensive line and trucked Henningsen before he could make a hand-off. It led to a fumble that WCHS senior Alex Ford recovered at the Gilbert 22. Two plays later Mathis got the payoff with a 5-yard touchdown rumble that put WCHS in front to stay, 12-7.

Ford, Jamin Stuhr and Connor Hanson all accumulated 31⁄2 tackles and combined for four tackles for loss. Hanson, a freshman, moved from linebacker to nose guard just two days prior to kickoff and was a menace in the middle of the field.

“If we’re going to play that defense, we’ve got to have a playmaker in the middle,” Howard said about Hanson. “He’s got the wheels and if they don’t double him he’s going to be in the backfield.”

In his inaugural start at spinback, Humphrey completed 2 of 4 passes for 48 yards. He connected with Montes on a 17-yard toss that set up Mathis’s second score, and then found Van Diest open over the middle for a 31-yard completion to the Gilbert 3 with under 3 minutes remaining in the second quarter. Mathis took a direct snap on the next play and plowed into the end zone for the third time.

Henningsen finished 15 of 33 for 256 yards from the pocket. Gilbert also used nine different ball carriers; Ethan Vesey picked up 26 yards on one tote to lead the team.

WCHS tailback Trey Mathis (32) sprints towards the end zone for a 37-yard touchdown as spinback Gabe Humphrey looks for someone to block against Gilbert on Friday. DFJ photo/Troy Banning

Malachi Montes hauls in a pass near the sideline during the first half against Gilbert on Friday at Lynx Field. His fourth-quarter 60-yard pick-6 secured Webster City’s 33-20 victory over Gilbert. DFJ photo/Troy Banning

WCHS cornerback Tyler Olson lays out for the first of his two fourth-quarter interceptions during Friday’s 33-20 victory over Gilbert. DFJ photo/Troy Banning