Berg and Galetich on 2nd team, Balvanz and Lewis HM 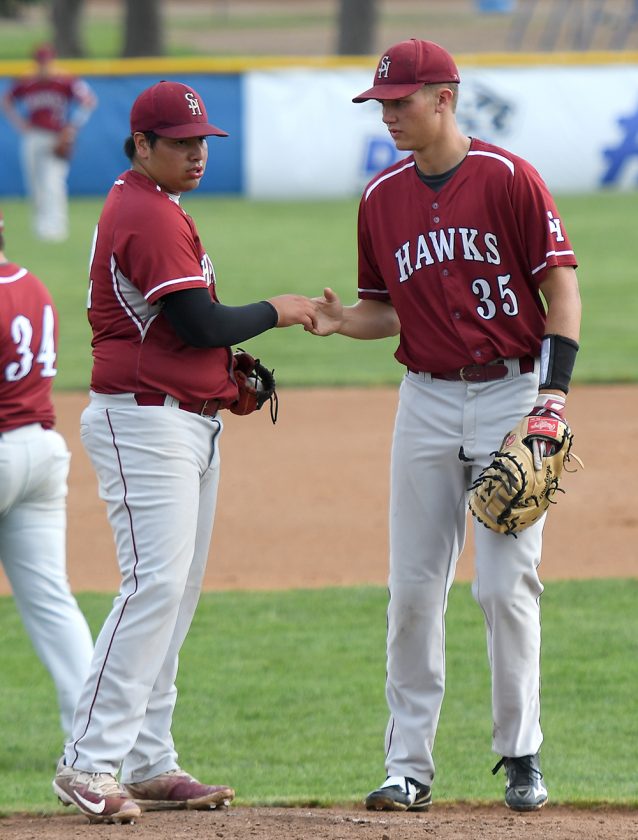 Zeke Balderas (left) and Cade Balvanz (right) come together prior to the start of South Hamilton’s Class 2A district game against Roland-Story in Dike last month. Balderas was recently named to the all-Heart of Iowa Conference first team, while Balvanz was an honorable mention selection. DFJ photo/Troy Banning

Conference co-champions North Polk and Gilbert combined for seven of the 13 spots on the first team. The Comets and Tigers both finished 13-1 in the HOIC; they split their two-game season series.

Balderas, the most lauded South Hamilton player during Kyle Galetich’s time as the program’s head coach, was the Hawks unquestioned leader, both at the plate and in the field.

With a bat in his hands, Balderas cranked out a .418 average with one home run and 18 RBIs, all of which topped the squad. He was also the team leader in doubles (9) and slugging percentage (.636), and was third in hits (23).

Balderas once again served as the ace of the South Hamilton pitching staff. He went 5-4 with a 1.84 ERA and 73 strikeouts in 491⁄3 innings on the bump.

Balvanz, who manned first base and didn’t make a defensive error all season, had a .286 batting average with 18 hits and seven RBIs.

Lewis played in just four games before he suffered a knee injury that sidelined him for the duration of the summer. However, there’s no doubt that he would have been one of the team’s catalysts, particularly on offense. In his shortened season, he went 8 for 10 (.800) at the plate and four of his hits went for extra bases. He also had four RBIs.

Just weeks after knee surgery, Lewis returned to the starting lineup for one final at bat against Gilbert on Senior Night. Right on cue, he tagged the ball and sent it into the gap in left-center. Not allowed to run, he hobbled to first base and drove in a run that scored all the way from first.