WEBSTER CITY — The cushion is gone. And, now, the heat is on.

Just two weeks ago, the Webster City baseball team sat comfortably in the driver’s seat as it trucked towards a potential second North Central Conference title in three years.

But two league losses, the most recent a 5-4 setback against Algona Monday night, in a span of 12 days have put the Lynx (17-8, 10-2 NCC) championship aspirations in jeopardy. Now they share the top spot with Humboldt (18-8, 10-2 NCC) with a road showdown against the Wildcats set for this evening.

What could bring out nerves in some has WCHS head coach Adison Kehoe excited though. He’s looking forward to seeing how his blend of veterans and what he affectionately calls his ‘young bucks’ respond.

“Once you become one of the teams to beat in the conference, you’re always going to get everyone’s best shot,” Kehoe said. “Come (tonight), once we step off the bus, we’ve got to be ready to take care of what we need to take care of.” 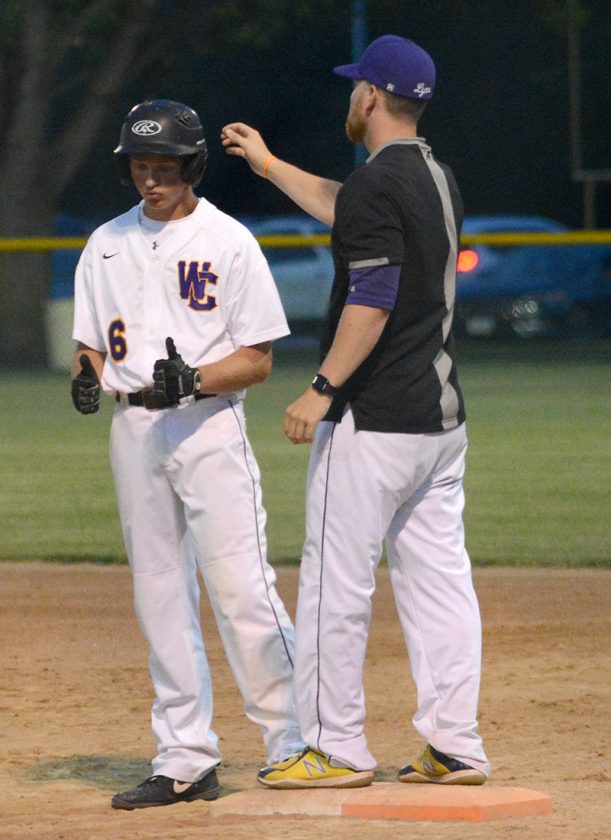 Sean Carver (6) gives the thumb’s up sign to show he’s OK as he stands on first moments after getting hit in the head with a pitch. DFJ photo/Tracy Runneberg

That’s what Algona (8-13, 6-5 NCC) did Monday night. Despite losing to WCHS 13-0 in 5 innings back on June 19, the Bulldogs played poised and took control from the opening pitch. They scored single runs in each of the opening three innings and built a 5-0 lead before the Lynx rallied late to make it interesting.

“The better team won and to make a long story short, we didn’t match their intensity,” Kehoe said. “We kind of went through the motions and for the first time this year we took a step backwards a little bit.”

Algona ended a six-game winning streak by all-state pitcher Dylan Steen by touching him for four hits and four runs, three of which were earned, over 42⁄3 innings. Matt Grein had the most success, as he went 2 for 3, keyed by a first-inning RBI double to right field that put the Bulldogs on the path towards victory.

Steen struggled with his control, particularly in the early innings. He hit two batters and threw a wild pitch that led to a second-inning run that gave Algona a 2-0 lead. Grein touched the plate in the third on an RBI single by Spencer Holmes.

In a five-run hole by the time the sixth inning rolled around, WCHS took a step towards the surface courtesy of a two-RBI single to right by Ty McKinney that scored Caleb Olson and Sean Carver.

Tyler Olson and Steen both reached base and scored in the seventh to get WCHS within one run.

With a fastball that sizzled, Holmes overpowered the WCHS bats somewhat over 61⁄3 innings. He fanned 11 and allowed just three hits.

“We didn’t play well, but you also have to tip your cap a little bit,” Kehoe said. “When he’s on, the Holmes kid, I’d put him in the top three pitchers in the conference. He was sharp.”

WCHS was at ninth-ranked (1A) Coon Rapids-Bayard last night with the big one against Humboldt set for this evening at 7:30 p.m.

Sean Carver (6) gives the thumb’s up sign to show he’s OK as he stands on first moments after getting hit in the head with a pitch. DFJ photo/Tracy Runneberg