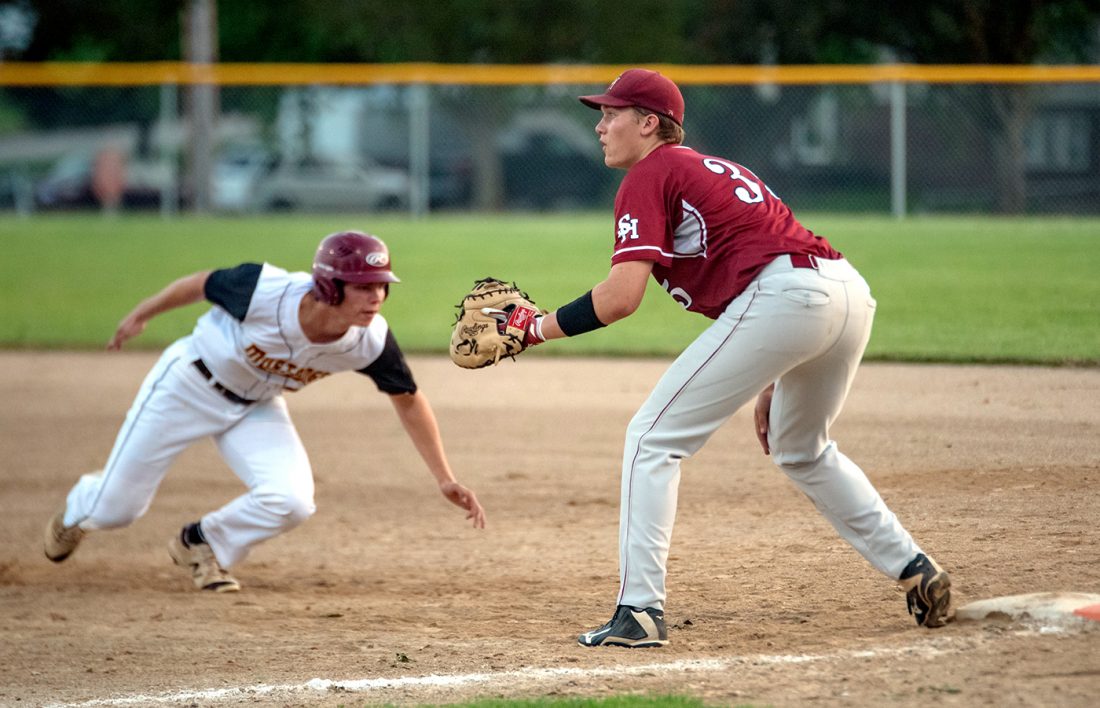 South Hamilton first baseman Cade Balvanz holds on a PCM runner on Friday in Prairie City. Balvanz had the Hawks only hit in a 10-0 loss. Photo by Angela Hewitt

A five-day span in which the Hawks faced four teams — North Polk, West Marshall, ninth-ranked (Class 3A) Gilbert and Prairie City-Monroe — that are a combined 73-12 certainly took a toll. The Hawks were unable to find any offensive rhythm and conjured up just one hit in a 10-0, 5-inning loss to PCM.

And as the Hawks made the long bus ride back to Jewell, head coach Kyle Galetich said he was just glad the week was over.

“It’s been a long, emotional week,” he said. “I’m glad this week is over, but we’ve got to take something away from it or it’s a wasted week. We’ve got to learn from this.” 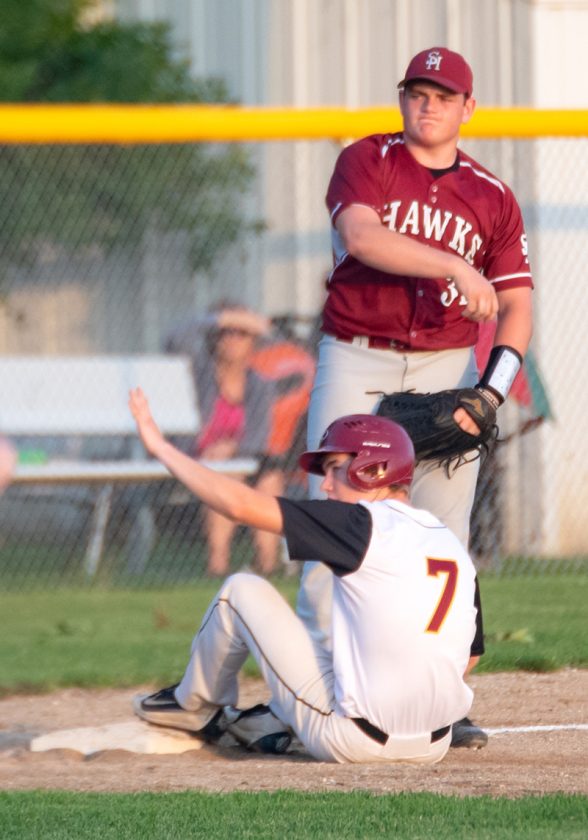 Cade Balvanz accounted for the Hawks lone hit. He broke up the no-hit bid of PCM hurler Derek Brown with a single in the fourth inning. Brown worked all five innings and struck out six against three walks.

“We didn’t hit the ball well at all,” Galetich said. “We got down early and just kind of stayed down.”

PCM (16-2, 8-2 HOIC) didn’t have any such problems. The Mustangs touched brothers Zeke and Elijah Balderas for a combined eight hits, the dagger a second-inning grand slam by Brayton Van Dyke that extended PCM’s lead to 6-0.

Van Dyke put together a career performance. He also ripped a single and double and finished with seven RBIs.

“I honestly think they’re the best hitting team in our conference,” Galetich said. “Their first five hitters are all seniors who have played for three years. They’re experienced and they’re athletic.”

Olin Meinders laced two hits, one of which was a double, and Reed Worth collected two RBIs.

Zeke Balderas was tagged for seven of the hits and 10 of the runs, only five of which were earned. He walked five and struck out eight.

South Hamilton will go on the road twice this week, first this evening against Belmond-Klemme followed by a Wednesday trip to Madrid.

South Hamilton first baseman Cade Balvanz holds on a PCM runner on Friday in Prairie City. Balvanz had the Hawks only hit in a 10-0 loss. Photo by Angela Hewitt