WCHS now 8-0 in NCC with No. 2 Wildcats on horizon 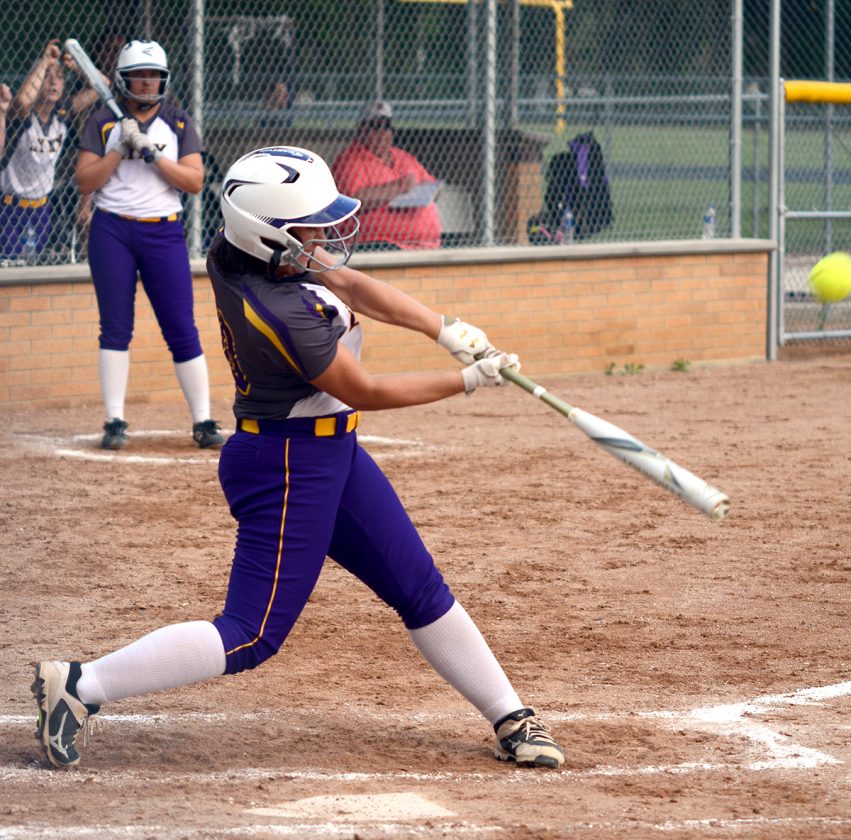 Webster City senior Cynthia Whitehill connects with a pitch and sends it on a ride for a three-run home run in the first inning against Hampton-Dumont last night at Lynx Field. WCHS stayed unbeaten in the NCC with a 5-1 win. DFJ photo/Tracy Runneberg

WEBSTER CITY — With one swing, quickly followed by one celebration, the Webster City softball team set on a course for its eighth North Central Conference victory in as many outings at Lynx Field last night.

Just 24 hours after making the trek to Algona for a victory, the Lynx returned home and shoved Hampton-Dumont aside, 5-1.

The WCHS senior designated player turned on an Avery Hanson offering and sent it out of the park in left field for a first-inning three-run home run that set the tone.

Kelly Stoakes and Zoey Woodle quickly put the Bulldogs (11-9, 4-5 NCC) back on their heels in the first inning with back-to-back singles, and a few batters later Whitehill put WCHS in front to stay with her first dinger of the season. 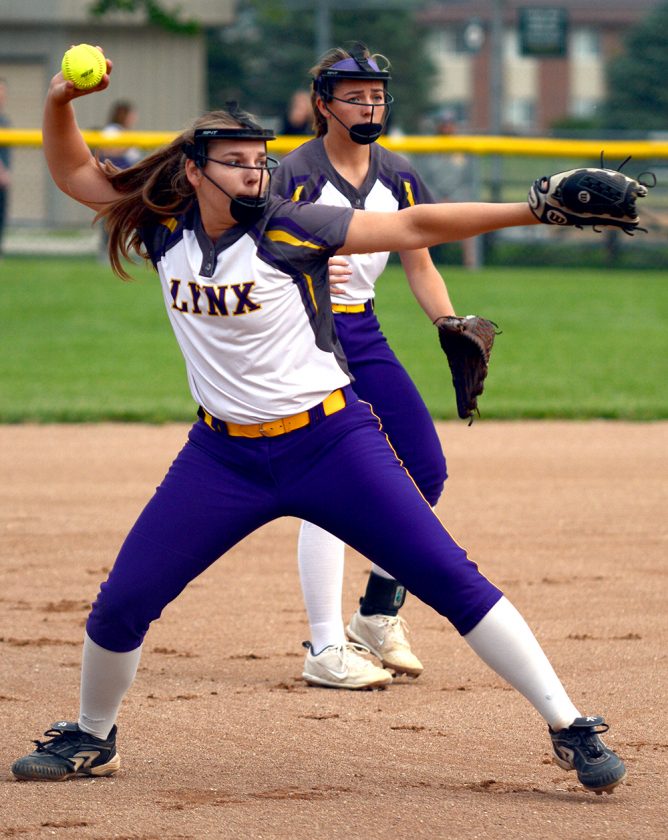 WCHS pitcher Jenna Miller rifles the ball to first for an out against Hampton-Dumont last night at Lynx Field. WCHS won the game, 5-1. DFJ photo/Tracy Runneberg

“That was a huge hit for us and credit (Whitehill) because she had two strikes on her,” WCHS head coach Jess Howard said. “She did a good job of staying poised, they gave her a pitch in her wheelhouse and she took advantage of it.

“You also have to give Stoakes and Zoey credit for getting on base ahead of (Whitehill). Any inning you get the lead-off batter on is huge. When you can do that, you show the other team you’re not going to waste time.”

The Lynx (15-4, 8-0 NCC) touched Hanson for eight hits by seven different players. Stoakes, who is now hitting .545 on the season, went 2 for 4 with a double and two RBIs. Atlanta Hopp also roped a double, while Leah Kasch, Tatum Goings and Alayna Finucan all joined Woodle with one hit.

Goings opened the second inning with a base knock and three batters later Stoakes pushed the Lynx lead to 4-0 with a shot to the gap for a double.

Stoakes plated another run on a ground ball in the fourth to increase the margin to 5-0.

That was more than enough for Jenna Miller, who utilized pinpoint accuracy to keep the Bulldogs guessing at the plate. Miller limited H-D to just four hits, eight fewer than when the two teams met on May 29 in Hampton, and she struck out seven.

“She did a great job of keeping them off balance,” Howard said of Miller. “She pitched ahead and when she does that we’re a lot stronger.”

The Bulldogs lone run came in the fifth inning courtesy of a Faith Grover RBI single. Hanson lashed a double, the team’s only extra-base hit.

WCHS will head to Roland on Saturday to face East Marshall at 8 a.m. and Saydel at 2 p.m. before returning home to host Clear Lake on Monday. A win over the Lions would set the stage for a showdown with second-ranked (Class 3A) and fellow NCC unbeaten Humboldt on Wednesday.

But Howard wanted no part of the Humboldt conversation.

“We preach one game at a time,” she said. “Humboldt doesn’t mean anything if you don’t take care of the one in front of it.”

Webster City senior Cynthia Whitehill connects with a pitch and sends it on a ride for a three-run home run in the first inning against Hampton-Dumont last night at Lynx Field. WCHS stayed unbeaten in the NCC with a 5-1 win. DFJ photo/Tracy Runneberg

WCHS pitcher Jenna Miller rifles the ball to first for an out against Hampton-Dumont last night at Lynx Field. WCHS won the game, 5-1. DFJ photo/Tracy Runneberg