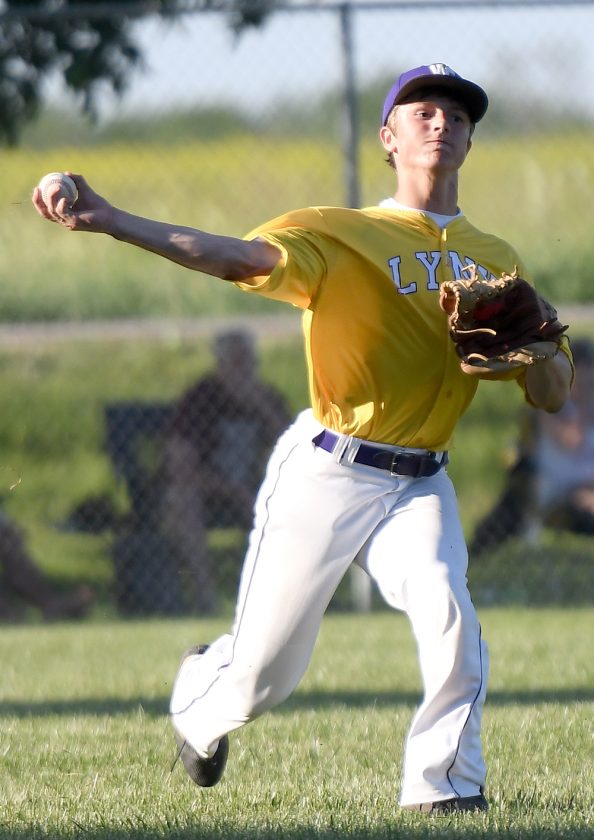 Webster City left fielder CJ Hisler fires the ball back into the infield and keeps a runner at third during the Lynx 11-1, 5-inning victory over Gladbrook-Reinbeck in the championship game of the Colo-NESCO tournament Saturday in Zearing. DFJ photo/Troy Banning

ZEARING — One walk-off came with a celebration, the other with a yawn.

They both brought equal parts success though and capped a week in which the Webster City baseball team not only found itself, but proved that high expectations should now be the norm.

The Lynx won the Colo-NESCO tournament on Saturday by knocking off Pleasantville, 5-4 in 9 innings, and Gladbrook-Reinbeck, 11-1 in 5 innings. It was the end of a six-day span in which WCHS (7-4) played six games and won five.

“It’s been really good,” WCHS senior Dylan Steen said. “It gives us a lot of confidence going into further weeks knowing we have the pitching to win five games in a six-game spread within such a short amount of time.”

Steen was the reason for the celebration. After WCHS fell behind Pleasantville 4-3 in the top of the ninth, the senior slugger sent the Lynx to the championship game with a two-run walk-off home run that cleared the scoreboard in left field and bounced off the highway that overlooks the field. 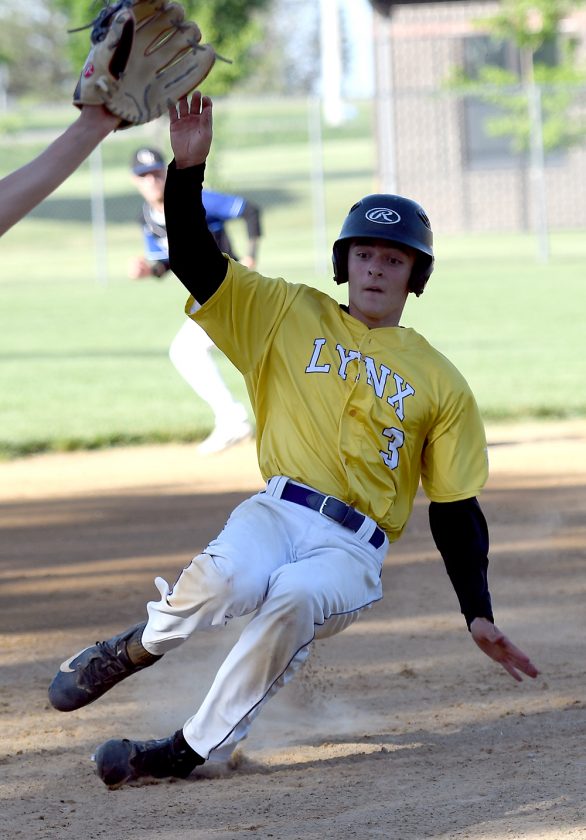 WCHS sophomore Tyler Olson slides into third with one of his three stolen bases in a 11-1 win over Gladbrook-Reinbeck on Saturday. DFJ photo/Troy Banning

Pleasantville pitcher Teron Mount made the mistake of feeding Steen a fastball middle in, and he feasted.

“I was just trying to put something into a gap hard,” Steen said. “I got my pitch and I did damage.”

There was no such drama against G-R (4-5) and its depleted pitching staff in the title game. WCHS had its way with four different Rebel hurlers — 11 hits and it scored multiple runs in four of its five at bats.

Still, Lynx head coach Adison Kehoe was looking for a specific attitude, one that kept the pedal floored throughout the game. He didn’t see it and he let his players know afterwards.

“I understand this is the sixth game in six days with a much younger team, I give them that, but you can’t put up a five-spot and then just go through the motions and take a couple innings off,” he said. “We’re trying to nip that in the bud a little bit.” 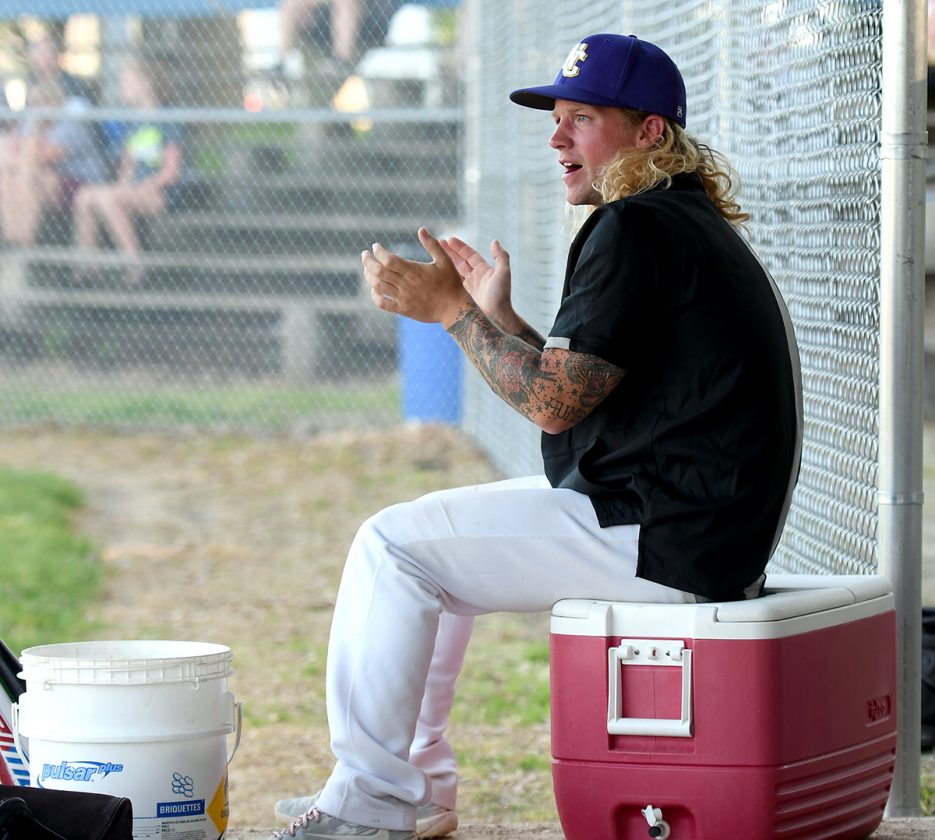 Kehoe was particularly irritated with the Rebels’ lone run, which was unearned in the third inning.

“I don’t care who the team is, if you give them an extra out it will bite you in the butt,” Kehoe said. “That’s three games where that’s proven to be true and earlier this week (against Pocahontas Area) it was the winning run.”

Steen and the Olson brothers, Tyler and Caleb, did the majority of the damage against G-R, as they combined for eight hits. All three had a double and Caleb Olson drove in four runs out of the clean-up spot.

WCHS scored four runs in the first inning to take command for good, keyed by Steen’s one-out double into the gap in right-center. Ty McKinney drove in a run four batters later on a suicide squeeze bunt and Hanson later walked with the bases loaded. 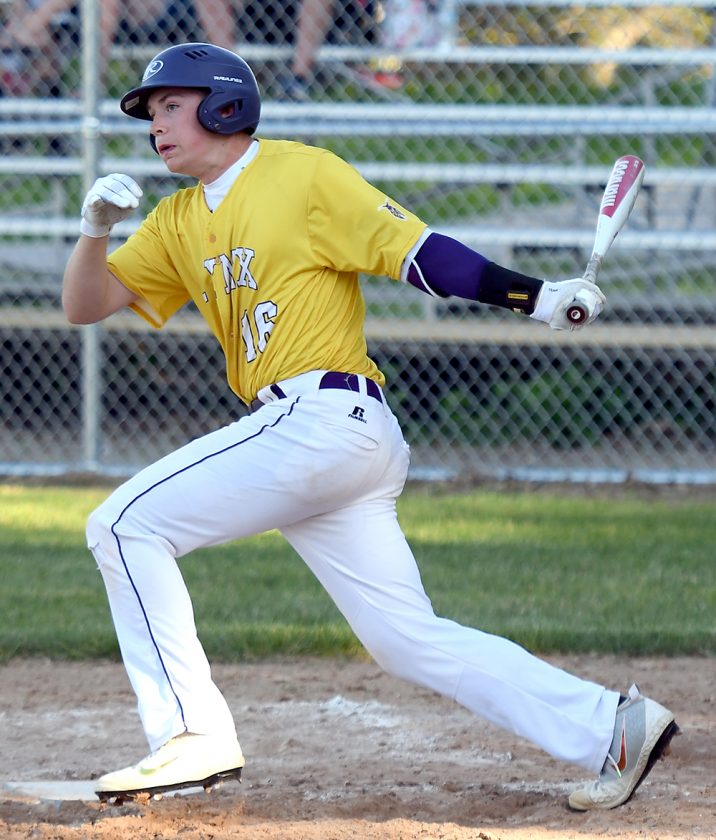 The Olson brothers hammered back-to-back doubles in the three-run second inning, and Caleb Olson added two more RBIs to his collection on a single to center in the third.

The ending in the fifth was anti-climactic, as Devon Stoakes drew a bases loaded walk to score Sean Carver with the Lynx 11th run.

Tyler Olson and Stoakes combined to toss a three-hitter on the mound. Olson, who went the initial four innings and fanned eight, improved to 4-0 and lowered his ERA to 0.57.

Struchen grabbed the win in the opener over Pleasantville. The senior went the final 61⁄3 innings in relief of starter Zach Dyvig and allowed just three hits.

Steen, Dyvig, and the Olson brothers all had two hits. Caleb Olson drove in two runs, while McKinney had one RBI. 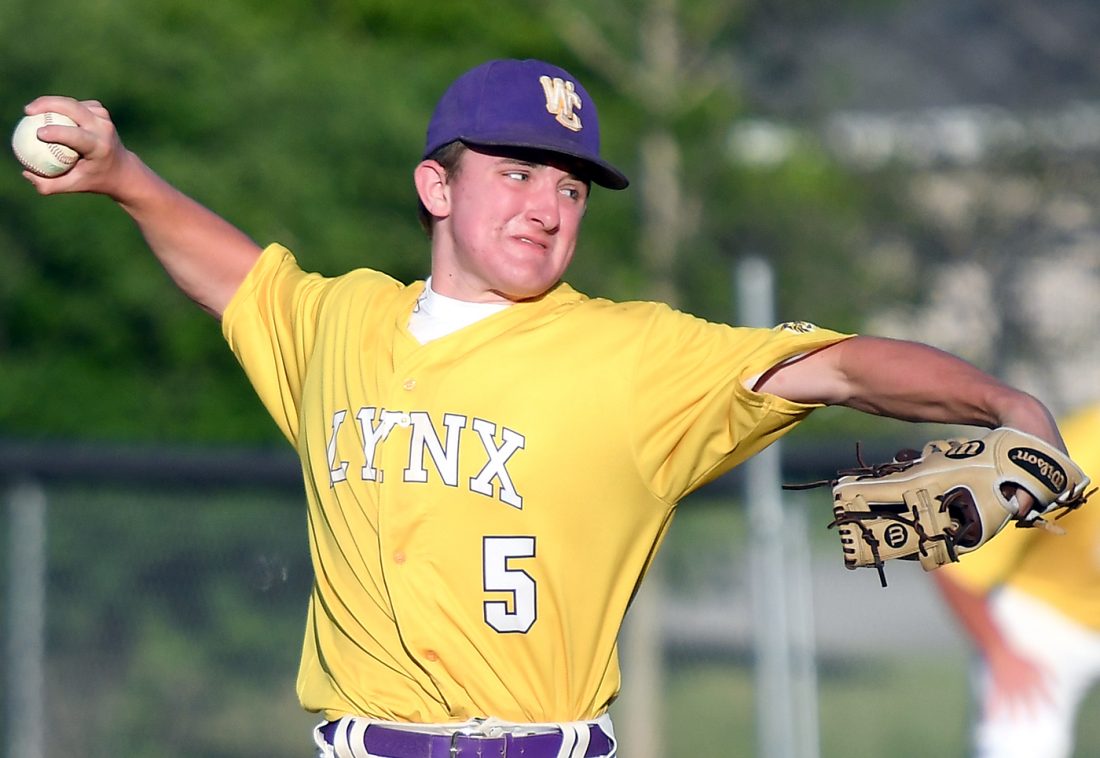 Stoakes and Beau Klaver both singled against Pleasantville (5-8).

Webster City left fielder CJ Hisler fires the ball back into the infield and keeps a runner at third during the Lynx 11-1, 5-inning victory over Gladbrook-Reinbeck in the championship game of the Colo-NESCO tournament Saturday in Zearing. DFJ photo/Troy Banning

WCHS sophomore Tyler Olson slides into third with one of his three stolen bases in a 11-1 win over Gladbrook-Reinbeck on Saturday. DFJ photo/Troy Banning