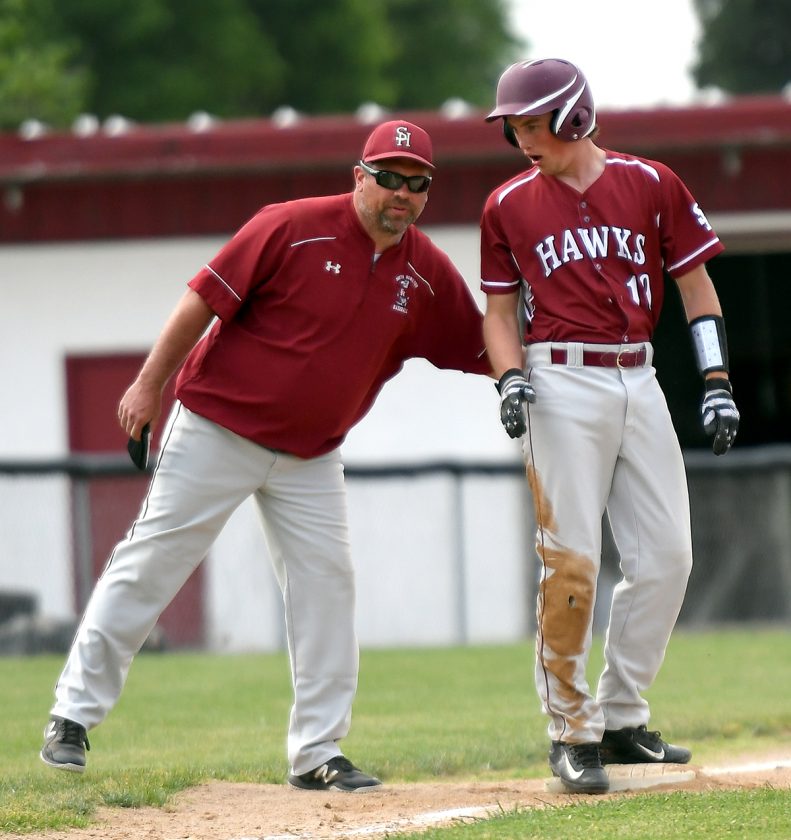 JEWELL — A lot of nights when Zeke Balderas makes the short walk from the dugout to the mound there is only one thing that can beat him: Zeke Balderas.

When the South Hamilton senior is around the plate and throws strikes, he’s an imposing force. When his control is lacking, that’s when things can get dicey.

Friday night’s outing was the former, not the latter, as the hard-throwing right-hander put Roland-Story on notice early that putting the ball in play was going to be difficult in a 6-0 shutout victory for the Hawks at the Mike Penning Athletic Complex.

South Hamilton (7-3 6-3 HOIC) went on to take Game 2 of the doubleheader, 2-1, to complete the sweep of its biggest Heart of Iowa Conference rival. Balderas and three other Hawk pitchers — Cole Berg, Tycin Barkema and Elijah Balderas — combined to allow just seven hits over the 14-inning stretch.

“Everybody that came in and pitched all did well (Friday night),” South Hamilton head coach Kyle Galetich said. “They threw strikes, they didn’t walk people and we didn’t make any errors.” 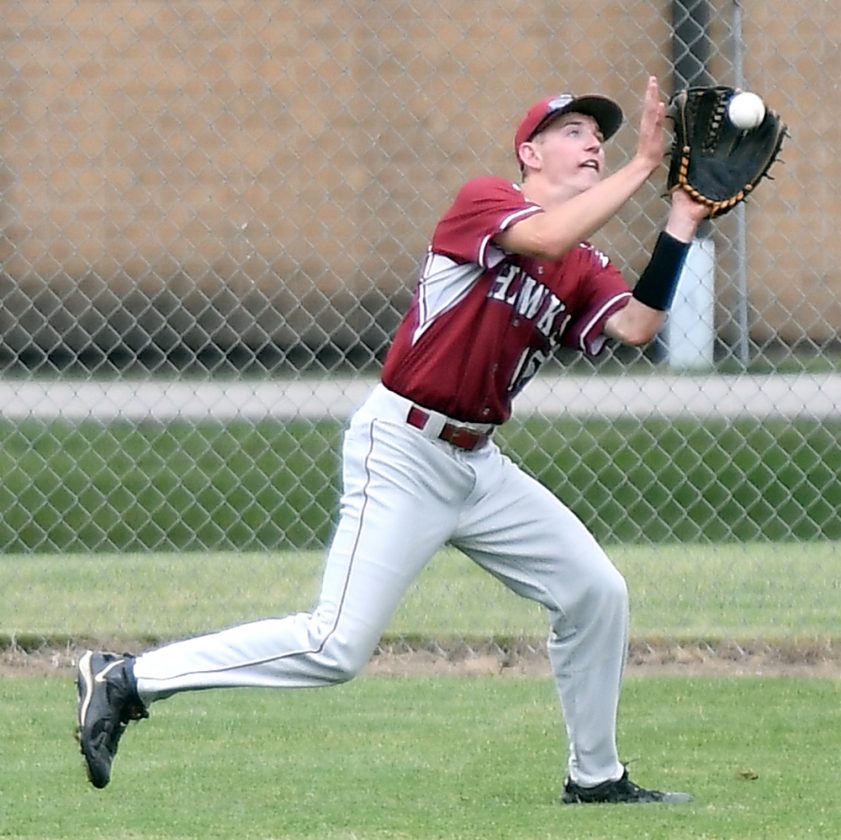 As the ace of the staff, Zeke Balderas set the tone in the opener. Roland-Story managed just three singles over six innings against Balderas, who struck out seven without issuing a walk. Maybe more importantly, he managed his pitch count and limited it to 61.

“He could put the ball wherever he wanted (Friday night),” Galetich said. “When he can do that, and then have his off-speed stuff, he’s hard to hit. He’s a handful when he’s on and that’s the Zeke we need the rest of the year.”

Berg finished off both games, as the senior worked three total innings and surrendered just one hit.

Barkema picked up the Game 2 win, the first of his varsity career, by allowing just one hit over three innings. Elijah Balderas took over in the fourth. The two and Berg combined to twirl a three-hitter with eight strikeouts.

Zeke Balderas provided all of the offense South Hamilton would need in the nightcap with a two-run home run to left field — his and the team’s first of the season — in the third inning. It also scored Brandyn Feighner, who was aboard with a walk. 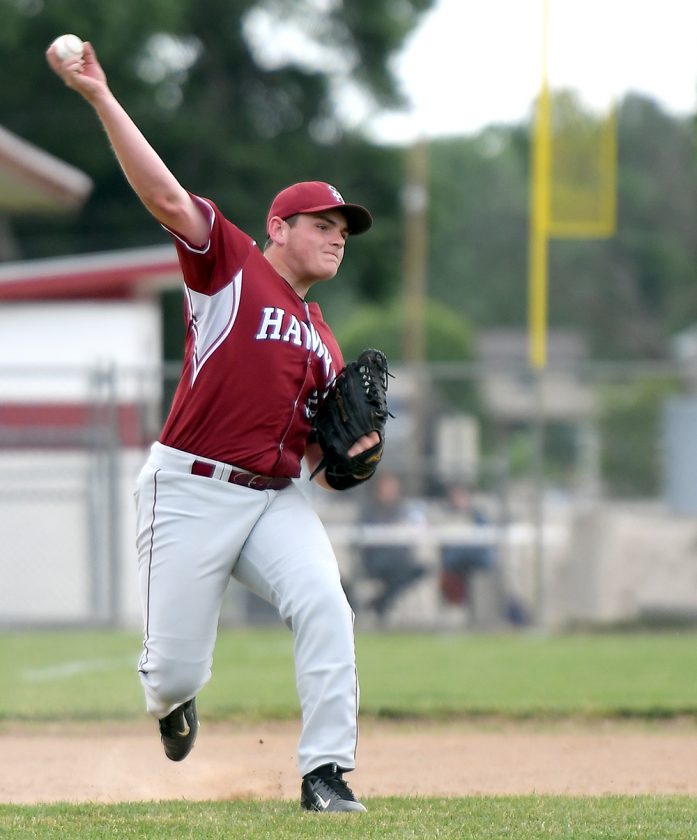 South Hamilton third baseman Cade Flaugh makes the throw across the diamond to first for the out against Roland-Story on Friday. DFJ photo/Troy Banning

Zeke Balderas, Freddie Lewis and Cade Balvanz all ripped two hits in Game 2. Berg and Lane Swenson had one each.

“I wish we could have hit the ball a little better in the second game, but we played well enough to win,” Galetich said.

The Hawks punished Roland-Story (10-6, 3-4 HOIC) in the opener. Norsemen starting pitcher Aaron Seydell didn’t fool the Hawks with his side-arm delivery, as he was touched for the brunt of South Hamilton’s 12 hits.

Berg manufactured the only run the Hawks would need in the first inning following a single. He stole second, moved to third on a passed ball and trotted home on an error.

Another Roland-Story throwing error made it 2-0 in the second. South Hamilton then put up a three-spot in the fifth to put the game out of reach. An Ethan Young shot to straightaway center field resulted in an RBI triple, and he scored moments later when Brock Galetich roasted a Seydell offering into left for a RBI single. Brock Galetich eventually scored on a double steal. 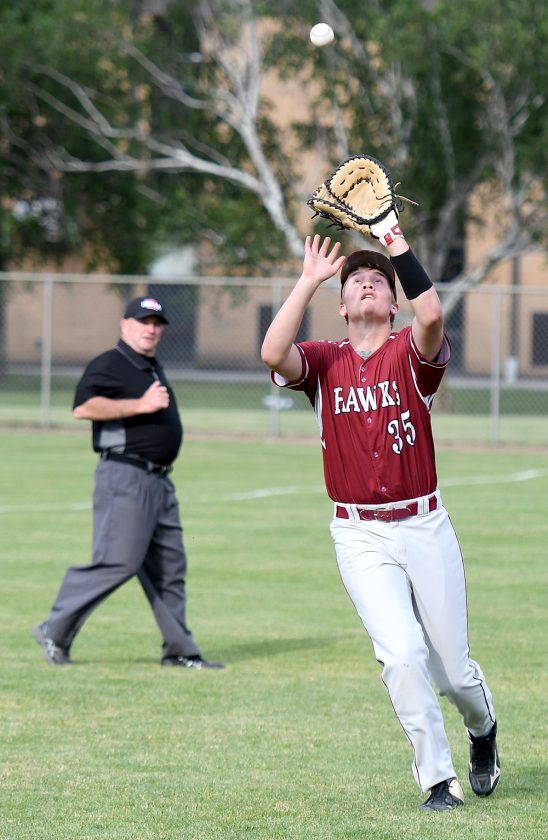 South Hamilton first baseman Cade Balvanz camps out under a fly ball in foul territory during Game 1 against Roland-Story on Friday in Jewell. DFJ photo/Troy Banning

Berg collected his second hit in the sixth and plated Cade Flaugh, who belted a double into the gap one batter earlier.

“We don’t play too many doubleheaders, so it’s kind of odd for us, but the kids stayed focused and getting two wins was nice,” Kyle Galetich said.

Balvanz, Brock Galetich and Flaugh joined Berg with two hits in the Game 1. A Zeke Balderas single to right ignited the fifth-inning flurry. Lewis and Quinton Grove both had infield singles and Barkema drove in a run. 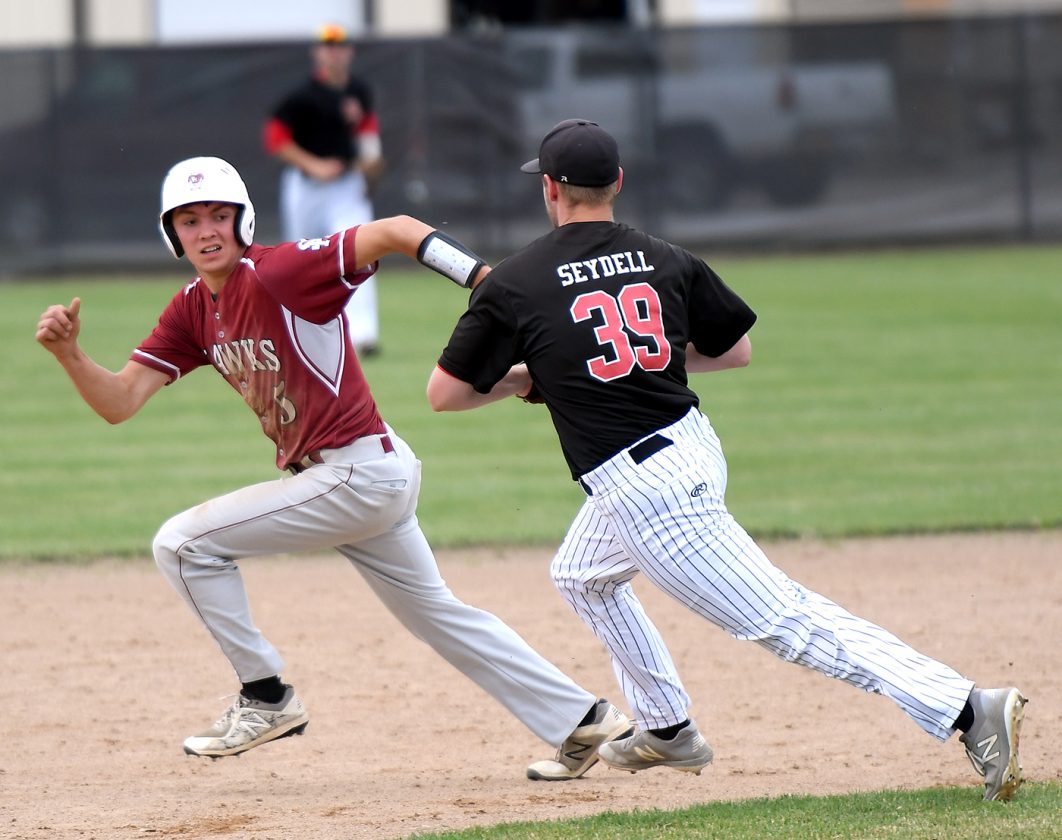 South Hamilton first baseman Cade Balvanz camps out under a fly ball in foul territory during Game 1 against Roland-Story on Friday in Jewell. DFJ photo/Troy Banning

South Hamilton third baseman Cade Flaugh makes the throw across the diamond to first for the out against Roland-Story on Friday. DFJ photo/Troy Banning