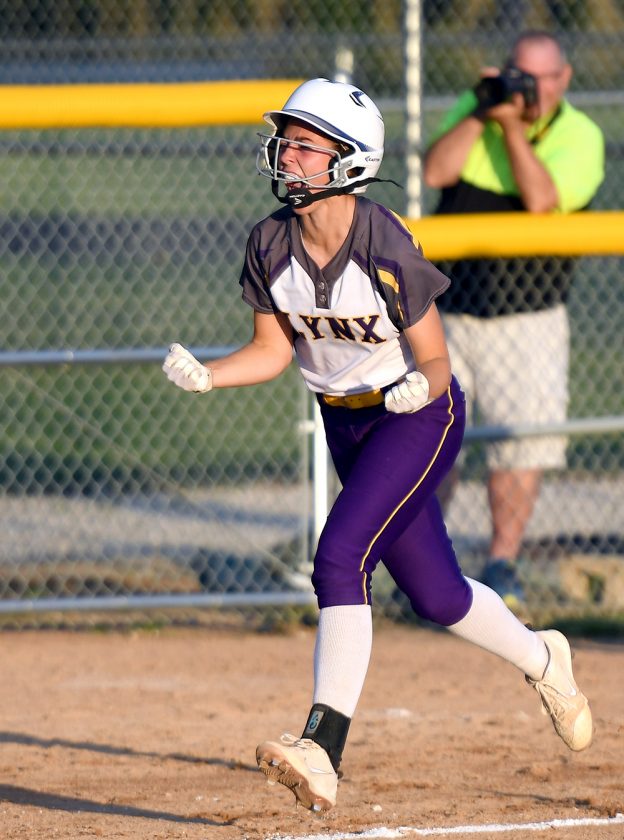 WEBSTER CITY — Mady Lange might as well have turned to the crowd and put her index finger in front of her lips.

The universal sign for shh! would have been appropriate as the Humboldt slugger circled the bases in the fifth inning Wednesday night at Lynx Field. With one swing of her bat, Lange turned an energized, hopeful Webster City crowd into a large group that looked like it didn’t want to anger the librarian.

Lang’s two-out solo home run to center field was the perfect answer to a two-run WCHS rally a half-inning earlier and gave third-ranked (Class 3A) Humboldt the lead for good in a 5-3 victory over the Lynx.

Winners of three consecutive North Central Conference championships, the Wildcats (21-2, 7-1 NCC) vaulted into a virtual tie atop the standings with WCHS (16-5, 9-1 NCC). The title very well could be decided when they meet again in seven days.

“They’re a good team,” WCHS head coach Jess Howard said. “There aren’t a lot of teams that win the conference (with an unbeaten record), so we’ve got to learn from (the loss) and make sure it doesn’t define our season.” 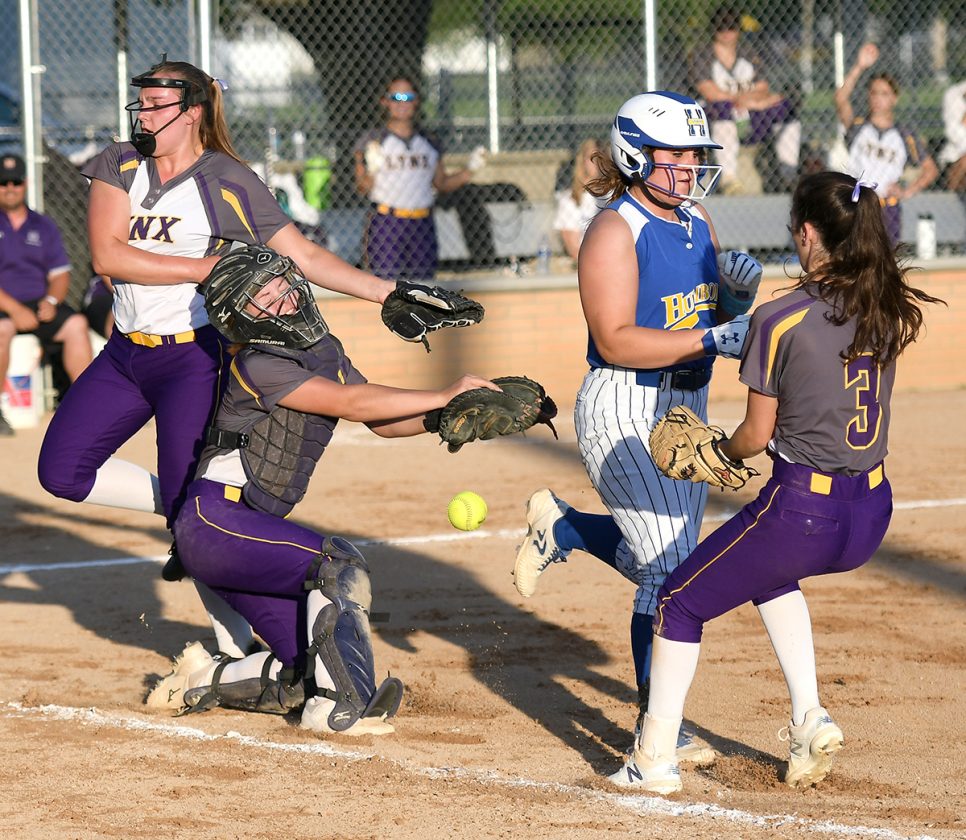 Lange, the Wildcats’ No. 3 hitter, went 3 for 3 with three RBIs. She drove in her first run on a sacrifice bunt in the third inning and added an RBI single in the seventh. But it was her long ball that turned the tide.

WCHS was hitless and trailed 2-0 when it came to bat in the fourth inning and swung the momentum in its favor. Kelly Stoakes, the leading hitter in the NCC, jump-started the rally with a lead-off double into the gap in left-center off Humboldt all-state hurler Ellie Jacobson. Three batters later, with two outs, Leah Kasch turned on a Jacobson pitch up in the zone and sent it on a ride. Her two-run home run and exuberant celebration put the Lynx in control.

But Lange provided the counter punch.

WCHS had just three hits off Jacobson; Kasch also singled in the seventh. The Lynx struck out 10 times and also popped up seven times, which made things easier on the Humboldt defense than Howard would have liked.

“(Jacobson) moves it and she’s got a rise … we just have to make sure we’re a little more disciplined at the plate and make sure we’re getting good cuts on the ball,” Howard said. 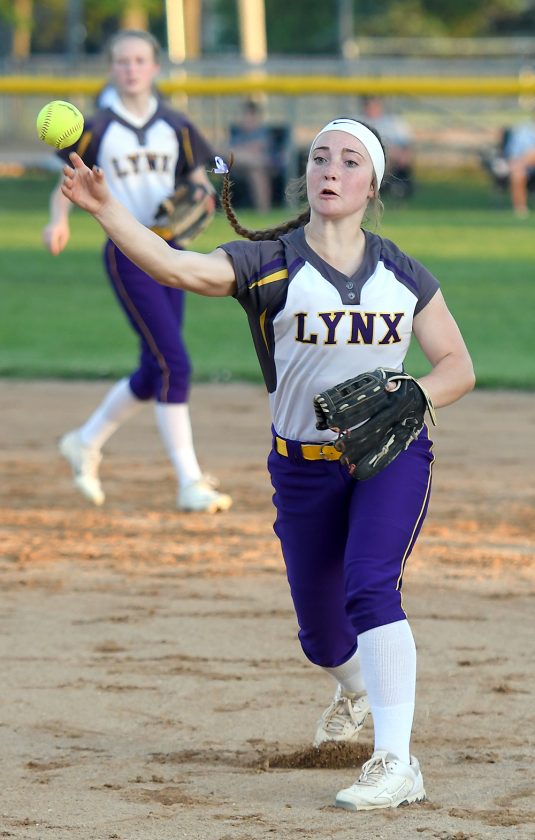 Atlanta Hopp gets the out at first during Webster City's 5-3 loss to Humboldt on Wednesday. DFJ photo/Troy Banning

WCHS, meanwhile, made four defensive miscues that led to two unearned runs. Humboldt struck out just four times and constantly kept the ball on the ground to utilize its speed. The Wildcats also stole four bases.

“They get runners on and you know they’ve got speed, so you’ve got to constantly be thinking about the next play,” Howard said. “We had a couple missed opportunities, but it’s a place where we need to learn form it for the next time we step on the field.”

Jori Hajek laced a third-inning triple into the gap in right-center that plated Humboldt’s first run, and she scored moments later on Lange’s bunt in front of the plate.

The Wildcats added two insurance runs in the seventh to move in front 5-2. WCHS committed two of its four errors in the frame.

Taylor McKinney walked to open the bottom of the seventh for the Lynx. She moved to second on Kasch’s single up the middle and then raced around to the dish on a RBI ground ball off the bat of Atlanta Hopp. 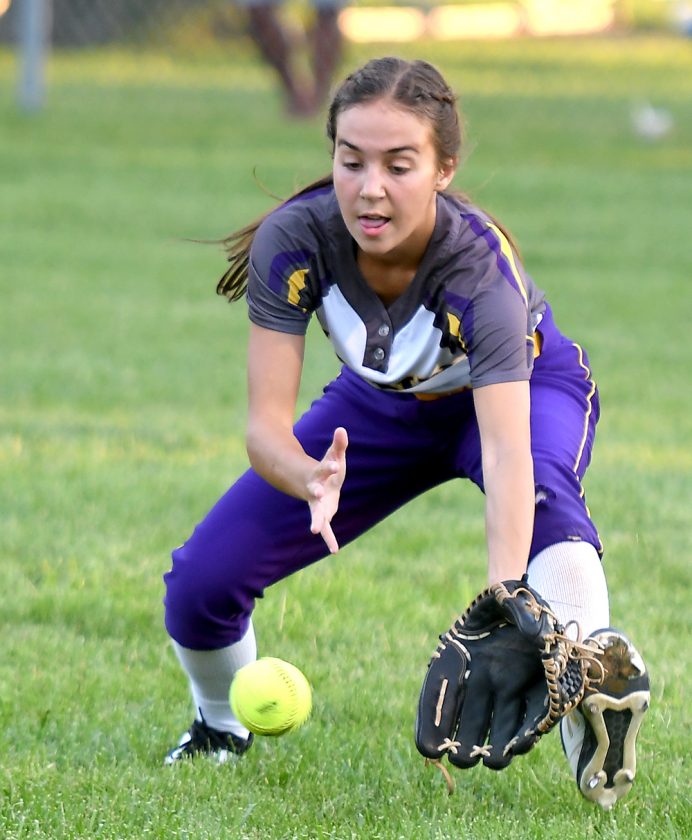 Among Humboldt’s eight hits was a sixth-inning single to right field off the bat of senior Ashlyn Clark, who is currently back with the team between chemotherapy treatments for Stage 4 Hodgkin’s Lymphoma. WCHS sold T-shirts to benefit Clark — the white shirts with purple lettering blanketed the stands — and also held a walking taco supper.

The Lynx will be back on their home diamond tonight to face Iowa Falls-Alden at 7:30 p.m. 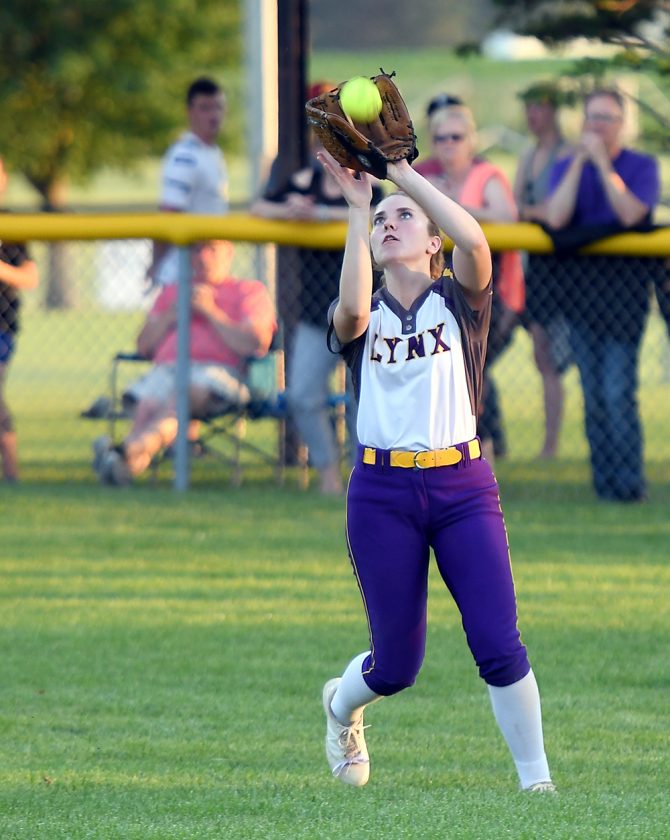 Atlanta Hopp gets the out at first during Webster City’s 5-3 loss to Humboldt on Wednesday. DFJ photo/Troy Banning