WCHS gives up lead in 7th, stays unbeaten in NCC in walk-off fashion 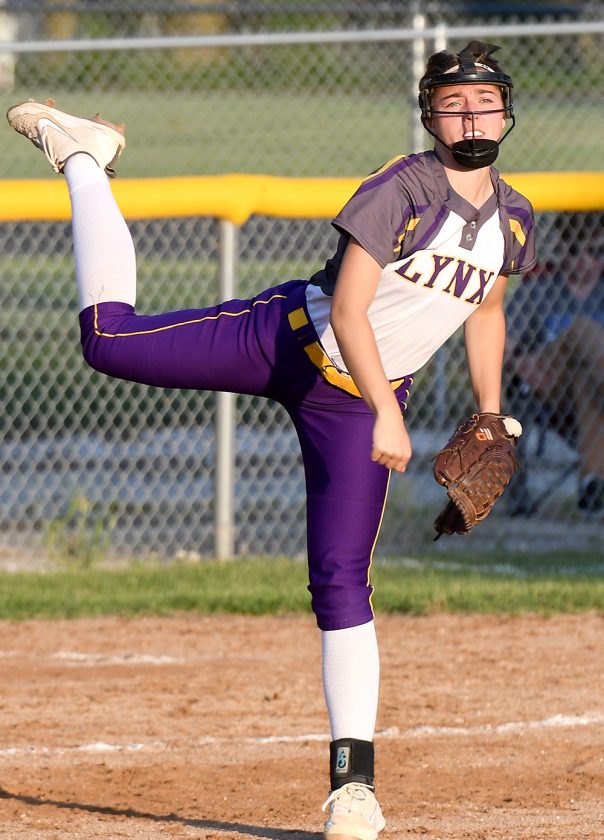 WCHS third baseman Leah Kasch watches her throw across the diamond splash into the mitt of first baseman Alayna Finucan for the out against Clear Lake on Monday. DFJ photo/Troy Banning

WEBSTER CITY — The relief was all over the face of Webster City head softball coach Jess Howard as she pushed dirt with her feet just outside the fading third-base line only minutes before she turned out the lights on Monday.

A dangerous opponent. A trap game. And her Lynx survived.

Despite blowing a three-run lead in the top of the seventh inning, WCHS remained calm enough to do what it needed to do to plate the winning run in the last half of the frame to escape with a 7-6 victory over Clear Lake and remain in sole possession of the North Central Conference lead.

A lead-off walk to Jenna Miller, followed by back-to-back singles by Atlanta Hopp and Alayna Finucan — the Nos. 8 and 9 batters in the Lynx lineup — finally put the Lions away. Finucan’s single prompted a wild throw to the plate that went into the Lynx dugout and allowed courtesy runner Fallon Casey to stroll home with the winning run. 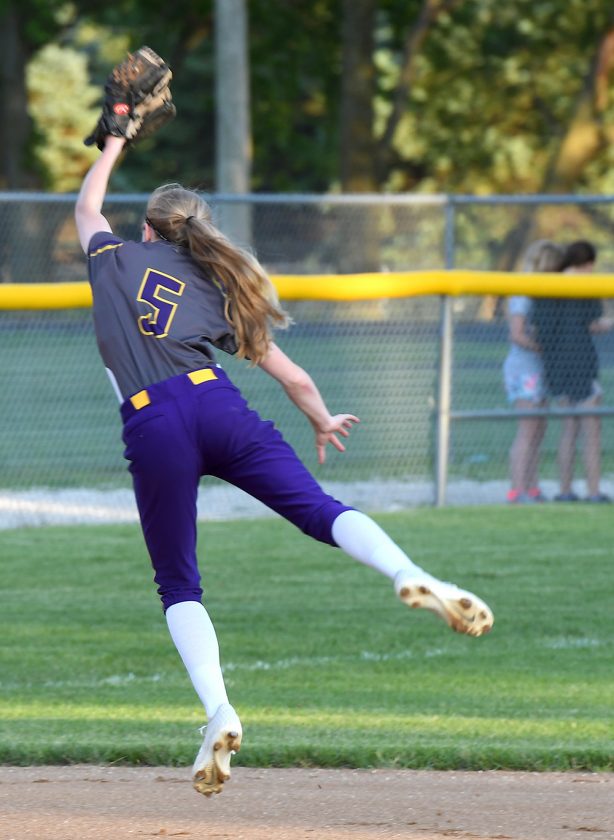 “That’s the first time we’ve played with a little bit of tightness, maybe feeling the pressure a little bit,” Howard said. “But we came back and scored when we needed to.”

Clear Lake (7-9, 3-6 NCC) has a fairly innocuous resume, but just ask third-ranked (Class 3A) Humboldt how dangerous the Lions can be. Clear Lake handed the Wildcats their only league loss, 4-1, last week.

“They’re tough,” Howard said of the Lions. “They have a lot of lefties in the lineup and they did a good job of executing. We’re done with them, we don’t have to face them again until next year.”

WCHS (16-4, 9-0 NCC) extended its winning streak to eight straight games and improved to 4-0 in one- and two-run games against league foes. The potent bottom of the order — Miller, Tatum Goings, Hopp and Finucan — accounted for six of the team’s 14 hits and four of its five RBIs.

“When we start with 7-8-9, teams think it’s going to be an easy inning for them, but we put the pressure on,” Howard said. “If they can continue to do that, we’re going to be tough.” 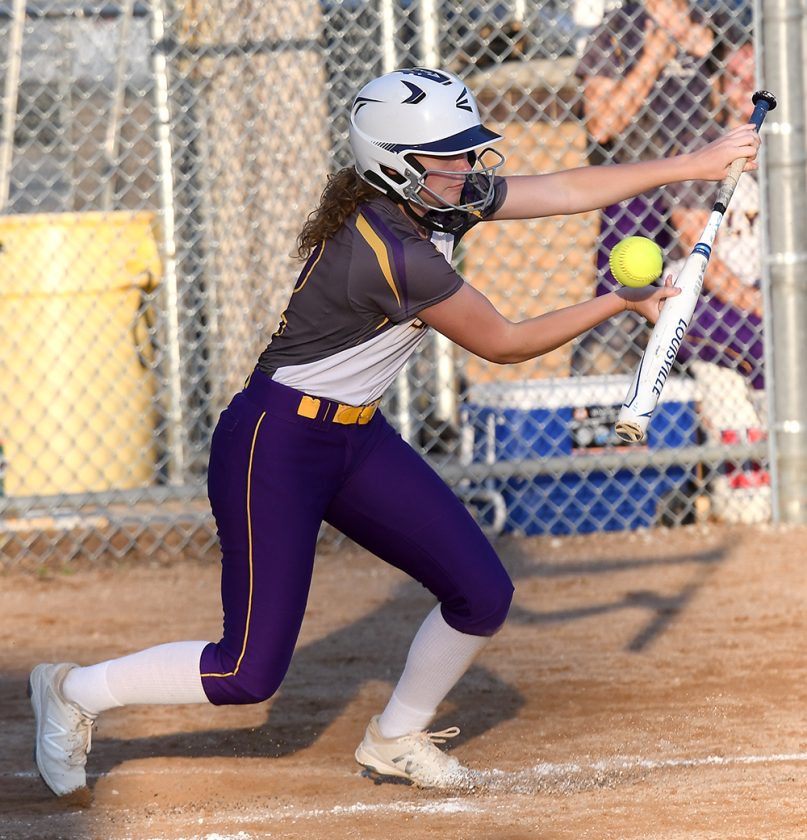 Hopp and Finucan both went 2 for 3 and combined to plate three runs. Finucan smacked a double. Miller had an RBI double and Goings added a single.

Zoey Woodle led the Lynx offense with a 3 for 4 showing out of the No. 2 spot. Lead-off stick Kelly Stoakes went 2 for 4 with a double, while clean-up hitter Leah Kasch laced a pair of singles and had one RBI. Taylor McKinney singled in front of Kasch.

Trailing 3-2, WCHS erupted for four runs in the fifth inning to pull ahead 6-3. Woodle and McKinney kicked it off with back-to-back singles, and Miller had the pay-off — an RBI double. Hopp lashed a two-RBI single two batters later.

But Clear Lake drew even in the seventh on an RBI single by Sara Faber and a two-run home run by Macy Mixdorf.

The Lions touched Miller for eight hits. Julia Merfeld had two singles, while Mixdorf, Faber and Kaylee Nosbisch all had two RBIs. 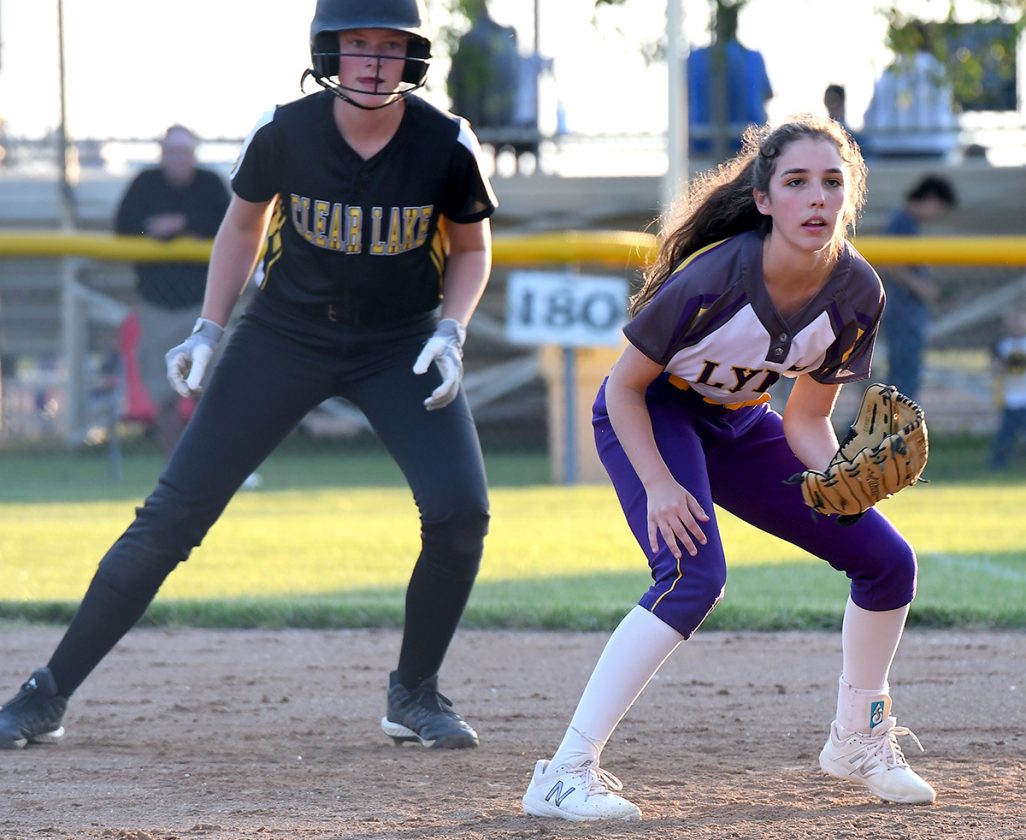 And now comes the biggest test of the season for WCHS, tonight’s showdown with Humboldt (19-2, 6-1 NCC) at Lynx Field at 7:30 p.m. The evening will also serve as a benefit for Humboldt senior Ashlyn Clark, who is battling Stage 4 Hodgkin’s Lymphoma.

Howard knows exactly what her team is up against — an experienced, quick opponent that will apply pressure from the first pitch to the last. 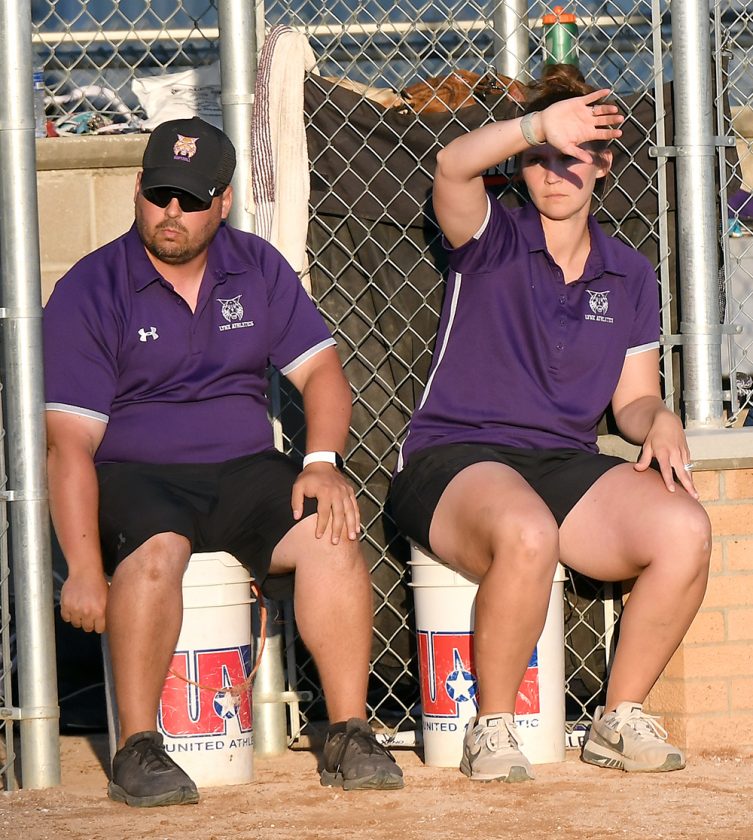 WCHS third baseman Leah Kasch watches her throw across the diamond splash into the mitt of first baseman Alayna Finucan for the out against Clear Lake on Monday. DFJ photo/Troy Banning