Diersen’s bat at top of order, defense from Lewis, Skartvedt and Harms in outfield key 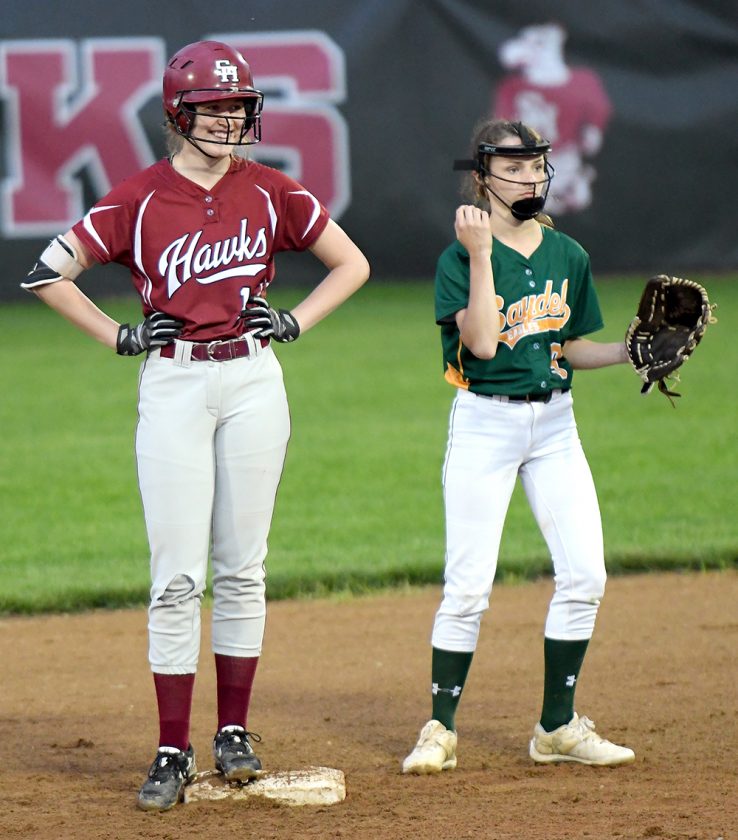 Breanne Diersen (left) smiles following a third-inning RBI double against Saydel on Monday. South Hamilton’s lead-off hitter went 3 for 4 in an 8-0 victory over the Eagles in Jewell. DFJ photo/Troy Banning

JEWELL — Hands on her hips and one foot on bag, Breanne Diersen looked at her South Hamilton teammates inside the dugout along the third base line and couldn’t contain her smile during the third inning against Saydel Monday night.

Diersen had just doubled into the gap in left-center to score a run, the first of what turned out to be many in a flurry that essentially put the game out of reach at the Mike Penning Athletic Complex.

South Hamilton did plenty of singing in the rain, so to speak, during its 8-0 spanking of Saydel in Heart of Iowa Conference action. It was the seventh consecutive victory for the Hawks (7-1, 3-0 HOIC) since a season-opening 10-4 loss to 13th-ranked (Class 1A) BCLUW. They’ve outscored their last four opponents 26-1.

“I’m very thrilled with how everything went,” South Hamilton head coach Harry McMaken said. “It was another really good effort from this team and they really are playing with a lot of confidence right now.”

The Hawks roped five of their nine hits, including all three of their extra-base knocks, and scored seven runs in the third inning off Eagles’ pitcher Jade Olsen. Diersen’s line-drive gap shot brought Emma Lewis around from first and South Hamilton was just getting started. Krista Swenson later blasted a RBI double to left-center and Jessi Harms followed it up with a two-run double to right field. 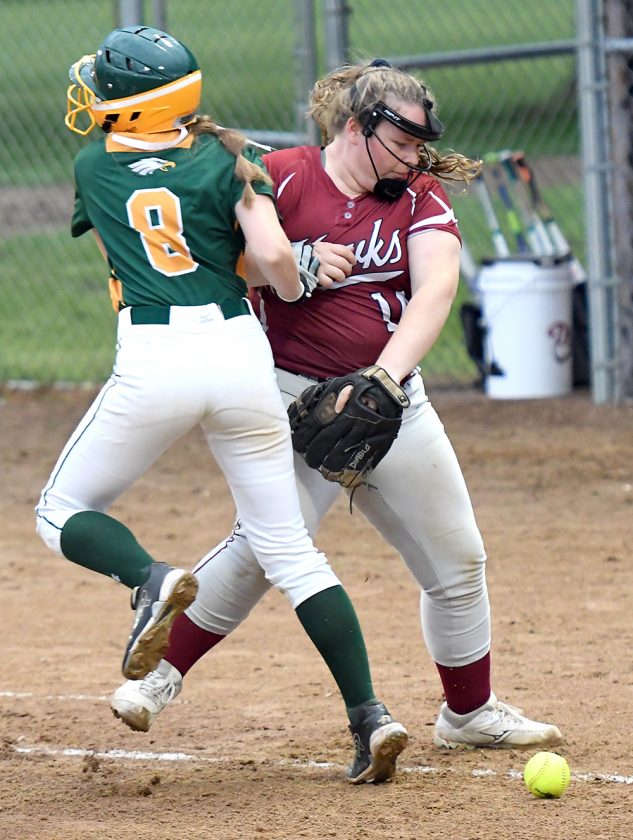 Kenzy Grady singled three batters later and Lewis, hitting for the second time in the frame, reached on an infield single to plate the seventh run.

“One through nine, every girls in the lineup can hit the ball,” McMaken said. “So other teams cannot ever relax defensively.”

Diersen scored the game’s first run after she led-off the bottom of the first with an infield single and raced around to the plate two batters later on a Cortney Harris single.

Saydel (3-5, 2-2 HOIC) touched South Hamilton senior pitcher Taylor Volkmann for nine hits, but they were all singles. The Eagles stranded eight runners, three of them in scoring position, as Volkmann struck out six against just one walk. 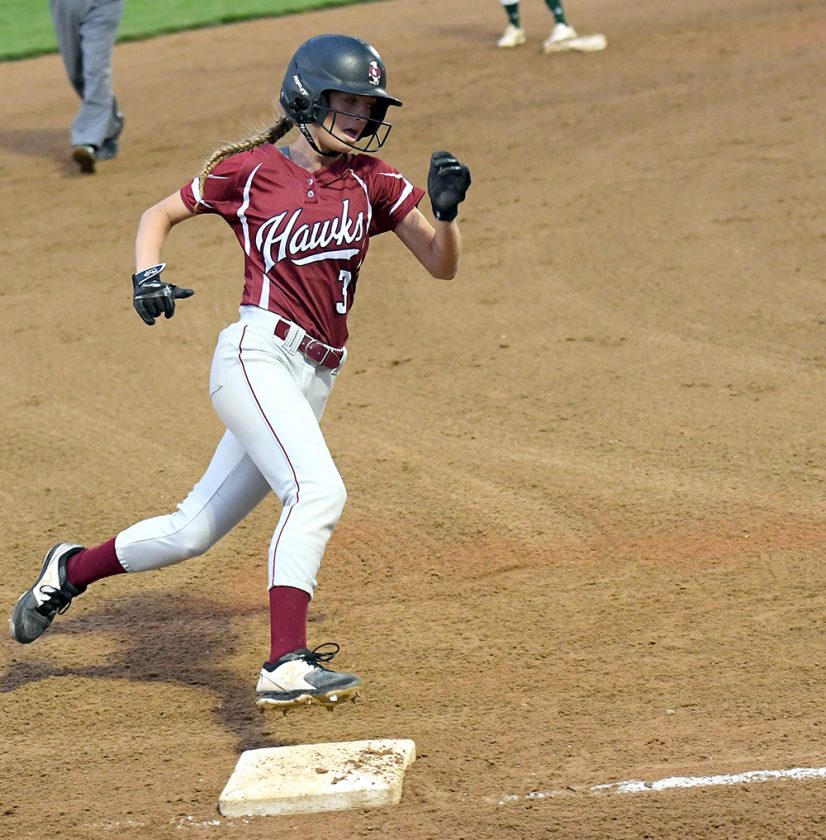 South Hamilton’s Emma Lewis rounds third on her way to the plate during the third inning against Saydel on Monday. DFJ photo/Troy Banning

“Taylor had a decent night. Not her best night, but a decent night,” McMaken said. “But defensively we just played lights out and had a lot of really fine catches in the outfield.”

Olsen, Alle Thompson and Kathryn Van Houten all had two hits for Saydel.

South Hamilton will hit the road this evening to take on Gilbert at 7:30 p.m. 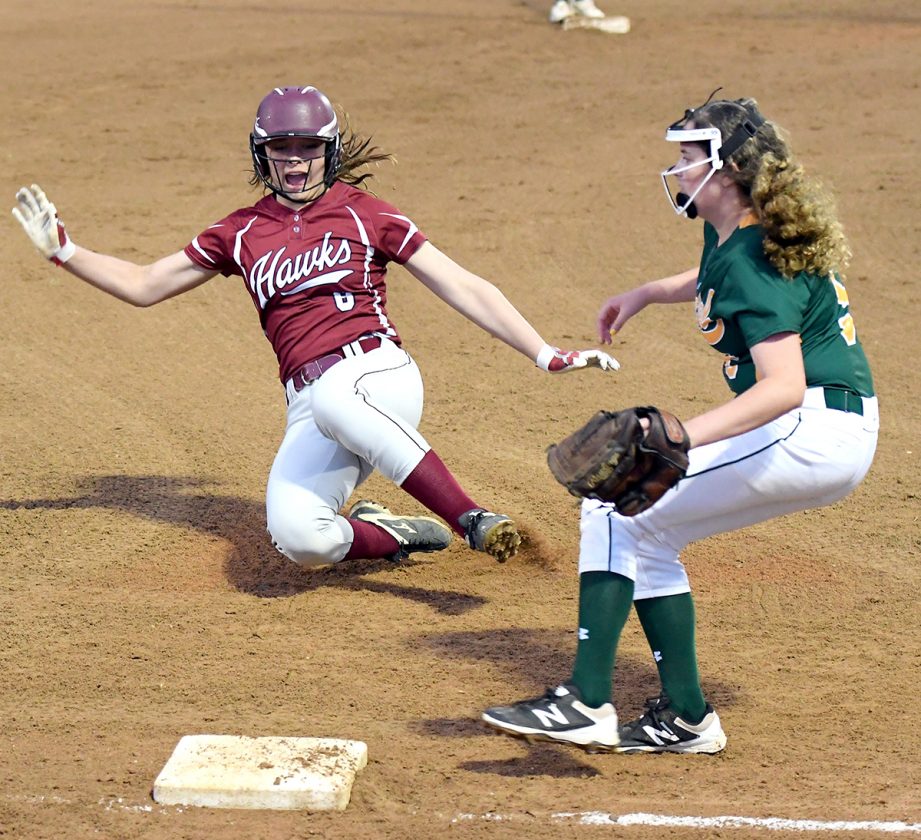 Breanne Diersen (left) smiles following a third-inning RBI double against Saydel on Monday. South Hamilton’s lead-off hitter went 3 for 4 in an 8-0 victory over the Eagles in Jewell. DFJ photo/Troy Banning

South Hamilton’s Emma Lewis rounds third on her way to the plate during the third inning against Saydel on Monday. DFJ photo/Troy Banning