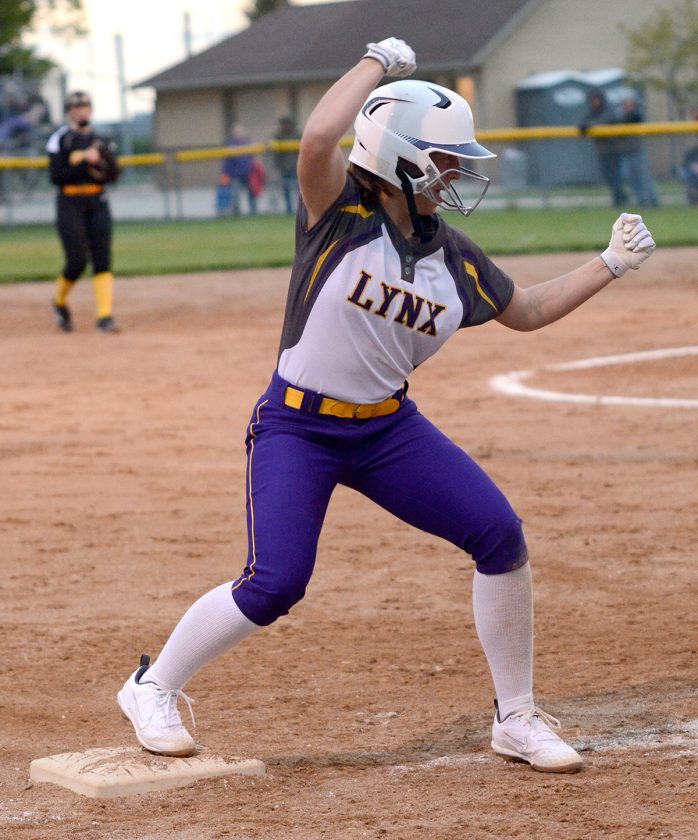 Webster City sophomore Leah Kasch celebrates at third base on her way towards the plate following her third-inning two-run home run against Algona Garrigan Monday night. Kasch supplied two of the Lynx 12 hits in a 12-1, 5-inning rout of the Golden Bears. DFJ photo/Tracy Runneberg

WEBSTER CITY — Leah Kasch started her celebration as she rounded second base. There was a brief pause as she stepped on third base and flexed before she completed her slow journey towards the plate where her teammates awaited.

An opening-night home run is certainly a good omen, and there were many of them offensively for the Webster City softball team Monday night at Lynx Field.

Kasch’s two-run blast to right-center in the third inning was just a piece of the carnage. WCHS roughed up Algona Garrigan pitcher Amanda Miller for 12 hits, four of which went for extra bases, in a 12-1, 5-inning trucking.

“The big thing was the girls came out aggressive right away,” Howard said. “They didn’t wait until they saw the pitcher the second time through, they attacked right away and put the pressure on.” 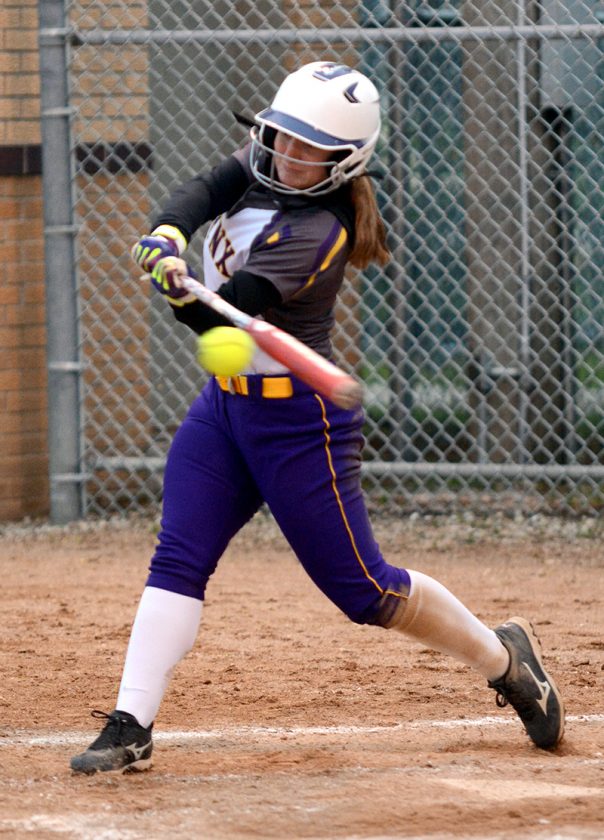 WCHS freshman lead-off hitter Kelly Stoakes ropes a double against Algona Garrigan on Monday. She went 4 for 4 in a 12-1 victory. DFJ photo/Tracy Runneberg

Kasch supplied the heaviest piece of lumber and went 2 for 3 with three RBIs and three runs scored, but it was lead-off stick Kelly Stoakes who impressed the most in the batter’s box.

The left-handed freshman, hitting out of the No.1 spot in the order for the first time, was pretty much flawless. Singles in the first and second innings produced runs, as did her third-inning double. She wrapped up her 4 for 4 performance with a triple in the fourth.

Stoakes doesn’t have the blazing speed that so many lead-off hitters possess, but her softball IQ is through the roof and Howard says that makes her the perfect choice to occupy the important spot in the lineup.

“She doesn’t pack a lot of speed, but she’s got a lot of instincts that make her good on the bases,” Howard said of Stoakes. “And her knowledge, she does a good job of understanding the count and what pitch to look for. He knows when she’s up in the count to look for that perfect pitch every single time, and when she’s down in the count she knows how to battle.”

Zoey Woodle put together a 2 for 4 night with a RBI and two runs scored right behind Stoakes, and Jenna Miller bashed a double and plated a run in the No. 3 spot. 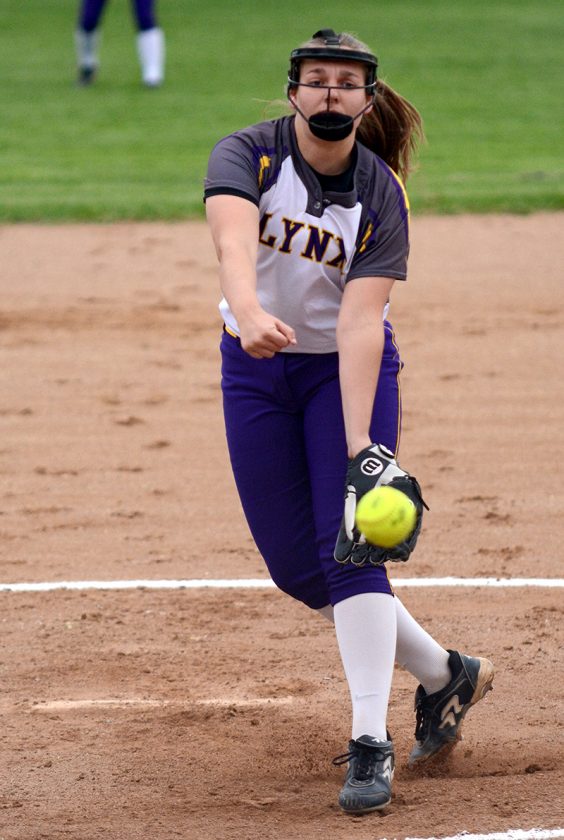 Taylor McKinney, hitting right behind Kasch in the No. 5 hole, smoked two singles and touched the dish twice.

Tatum Goings added a single for the Lynx.

After giving up a first-inning run on a bloop single by Amanda Miller, WCHS put its offensive skills on display. A Kasch RBI single helped push the Lynx in front 3-1, and they exploded for five more runs in the second to move in front 8-1. Kasch’s third-inning bomb started the Garrigan bus.

Jenna Miller welcomed the offensive help, as the sophomore right-handed pitcher worked herself out of several jams to collect the victory. Garrigan touched her for just four hits — MacKenzie Meister had two of them — and they were all singles. The Lynx hurler struck out three.

“Jenna looked strong and confident on the mound,” Howard said. “She was hitting her spots well and that allowed us to get a lot of easy ground ball and fly ball outs.” 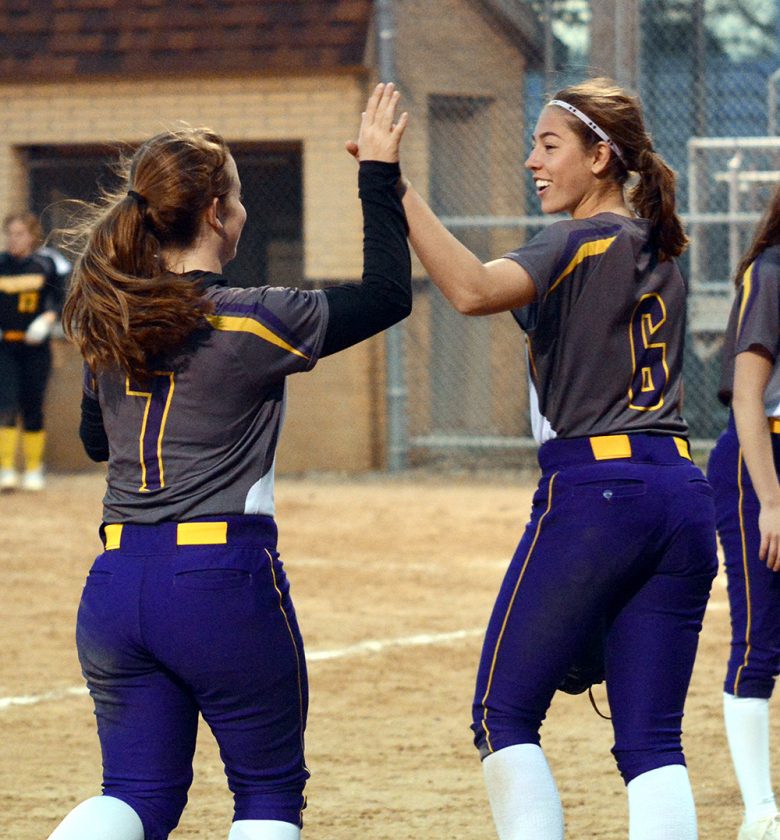 Amanda Miller had a chance to extend the game with runners on second and third with two outs in the top of the fifth. She sent a Jenna Miller offering on a ride to deep left field, but Stoakes hopped on her horse and tracked it down to finish off the Golden Bears.

WCHS will head to Ogden for a tournament on Saturday. The Lynx will open up against Greene County at 10:45 a.m., and will also play Carroll and 15th-ranked (Class 2A) Ogden.

Webster City sophomore Leah Kasch celebrates at third base on her way towards the plate following her third-inning two-run home run against Algona Garrigan Monday night. Kasch supplied two of the Lynx 12 hits in a 12-1, 5-inning rout of the Golden Bears. DFJ photo/Tracy Runneberg

WCHS freshman lead-off hitter Kelly Stoakes ropes a double against Algona Garrigan on Monday. She went 4 for 4 in a 12-1 victory. DFJ photo/Tracy Runneberg