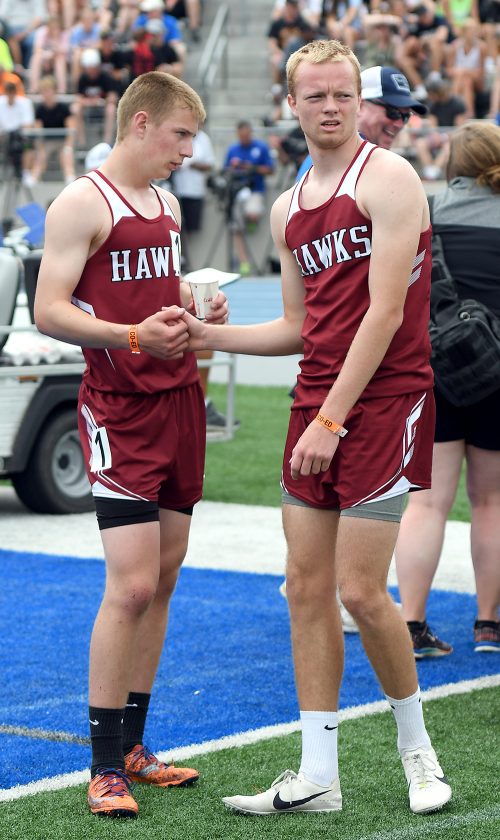 Quinton Grove (left) and Logan Peters shake hands following the Class 2A mile, their last run together as teammates, at the state meet in Des Moines on Saturday. DFJ photo/Troy Banning

DES MOINES — Logan Peters lingered on the Drake Stadium infield Saturday afternoon. He looked around the stadium, he approached and congratulated fellow runners — anything to make the moment last a little bit longer.

Because once he walked away, it was for good.

A once-in-a-generation athletic prodigy, Peters wrapped up a South Hamilton career that has few rivals in front of a packed house at the Iowa High School State Track And Field Championships.

It wasn’t perfect, far from it. Peters — South Hamilton’s school record holder in the 800, mile and two-mile — was unable to defend the Class 2A 1,600-meter state title he won in 2018, but he did collect his eighth career state medal with a third-place finish in the 800.

“It’s been a blessing,” Peters said after a 10th-place finish in the mile, his final race, in a time of 4:35.11. “To all of the coaches and teammates that have pushed me through the years, I just want to thank them because none of this would have happened without them.” 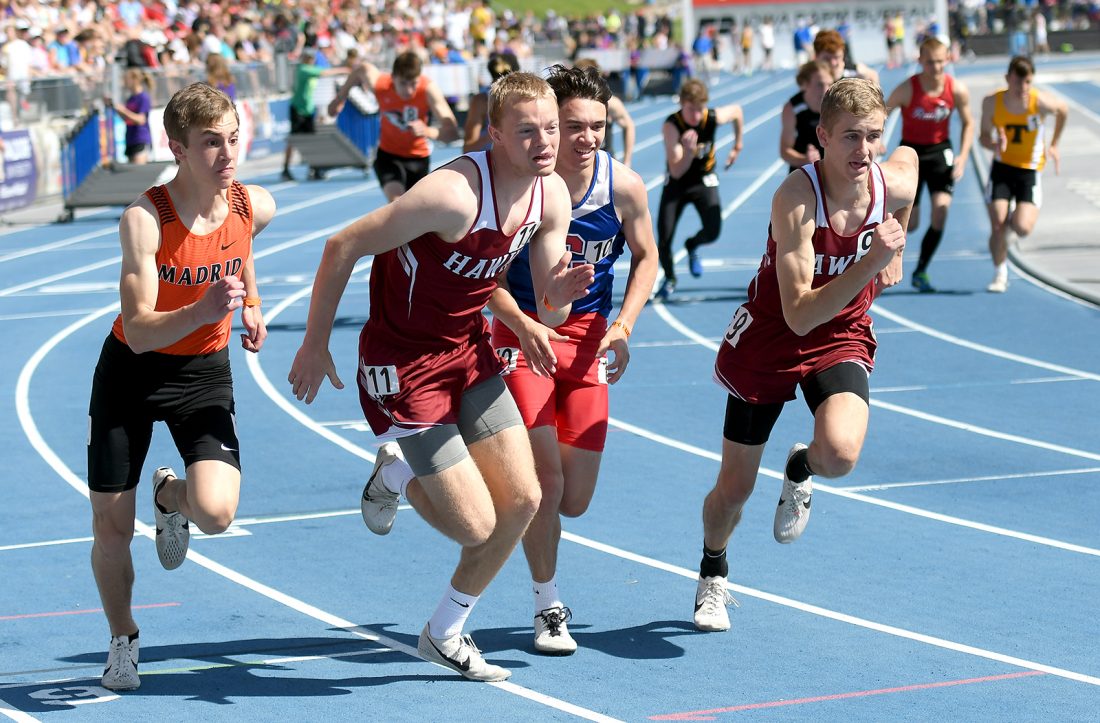 Quinton Grove, a South Hamilton junior, struggled in the mile as well. Noticeably off his game from the opening lap, he stuck near the back of the pack throughout and placed 23rd in 4:56.37.

“I just came out and didn’t feel like my normal self,” Grove said. “I don’t know what it was, but I can’t make excuses.”

Peters attempted to hang with the leaders, but he began to fade by the third lap and drifted back on the final lap.

“Coming back from the 800 is always tough,” Peters said. “I tried to push too hard the first two laps and I paid for it.”

Earlier on Saturday, Peters secured the bronze in the 800 for the second consecutive season in 1:57.63, while teammate Conner Hill turned his first-ever individual state-meet run into a seventh-place medal in 1:58.39. 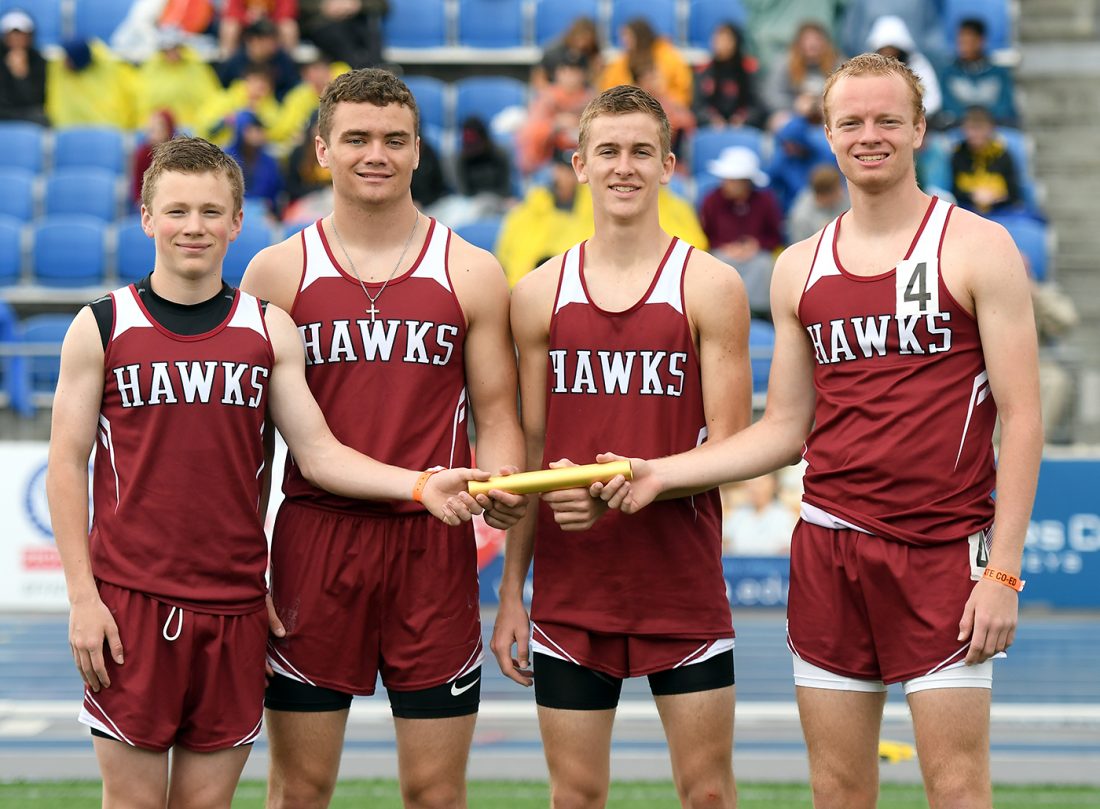 The South Central Calhoun duo of Chase McAlister and Spencer Moon pushed the pace at the start of the second lap and Peters hung close. McAlister eventually pulled away and won by nearly two seconds.

Peters pulled up right behind Moon, his future roommate at Simpson College, and attempted to go around him on the inside as they sprinted down the straightaway, but Moon countered and hung on for the silver medal.

“I wish I would have got him, but he cut me off at the end,” Peters said. “It was a smart move on his part. I wouldn’t let anyone pass me on the inside either.”

Hill took an outside line and leaned across the finish line just a few steps behind Peters. 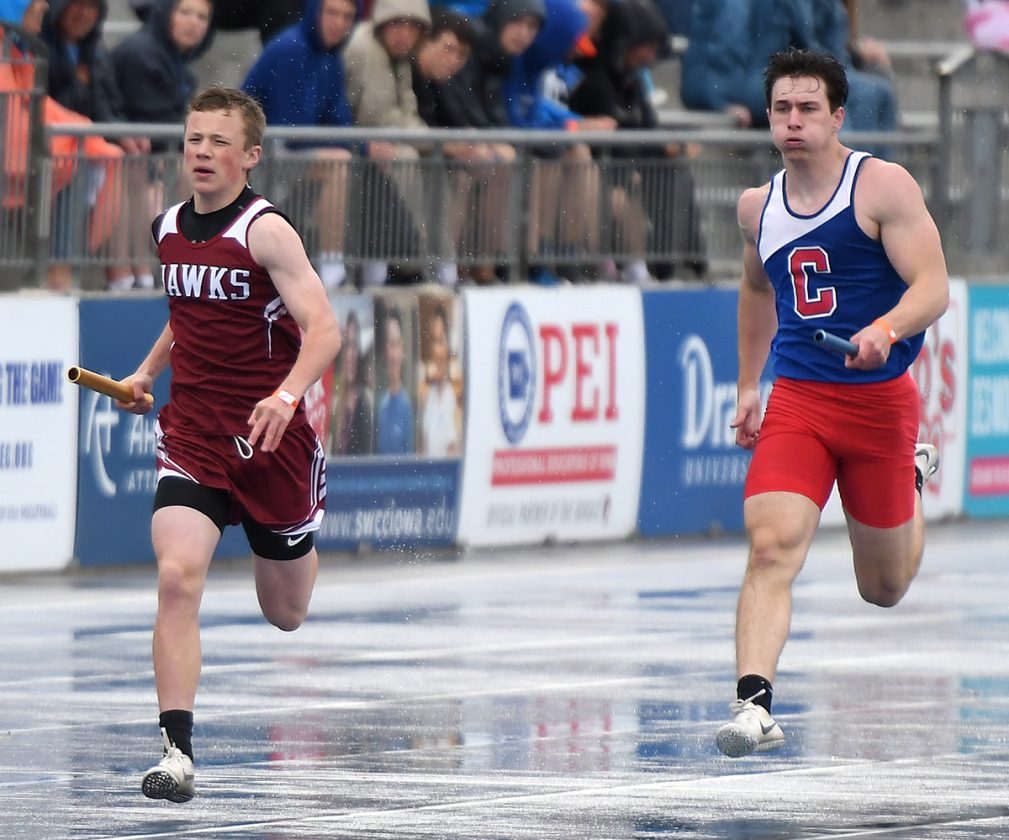 Brock Galetich (left) runs the opening 200-meter leg for South Hamilton during the distance medley relay on Friday. The Hawks won the Class 2A bronze medal in the event. DFJ photo/Troy Banning

“Coming into the race I knew I had a pretty good chance to medal and that was the goal,” Hill, a first-year runner, said. “It’s a rewarding feeling.”

Hill also kept his post-race streak of vomiting intact. Even he laughs about it.

Peters and Hill teamed up with Brock Galetich and Sam Lewis to place third in the distance medley relay in 3:38.51 on a rainy Friday. South Hamilton entered the race with the top qualifying time, but South Central Calhoun buried the field with McAlister and Moon running the final two legs.

Peters took the baton from Hill in seventh place in the last of the three sections. Peters pushed the pace during the first lap and moved all the way up to second, just behind Moon. He again paid a price for it though and faded to third over the final lap. 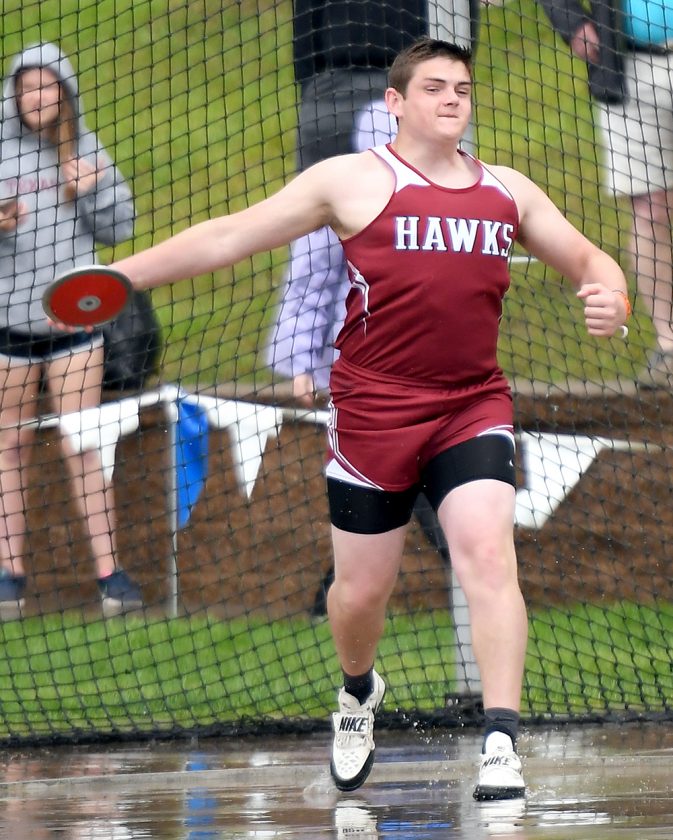 “We were going for a little better time, but I’m happy with how we did,” Lewis, another senior said. “Third place is pretty good. I’m satisfied with it.”

Also on Friday, Cade Flaugh placed 22nd in the discus with a top toss of 110 feet, 4 inches.

Throw in Peters’ cross country highlights — four state-meet appearances and one all-state honor — as well as his exploits on the basketball court — three more trips to state, one all-state accolade, 848 career points and 423 career rebounds — and it’s hard to ignore his status as one of the greatest athletes in the history of South Hamilton schools.

“All of this, these past four years, couldn’t have happened without the tight-knit community that we have in Jewell,” Peters said.

And then he turned and walked off the infield for the final time. Gone, but never to be forgotten.

Quinton Grove (left) and Logan Peters shake hands following the Class 2A mile, their last run together as teammates, at the state meet in Des Moines on Saturday. DFJ photo/Troy Banning

Brock Galetich (left) runs the opening 200-meter leg for South Hamilton during the distance medley relay on Friday. The Hawks won the Class 2A bronze medal in the event. DFJ photo/Troy Banning