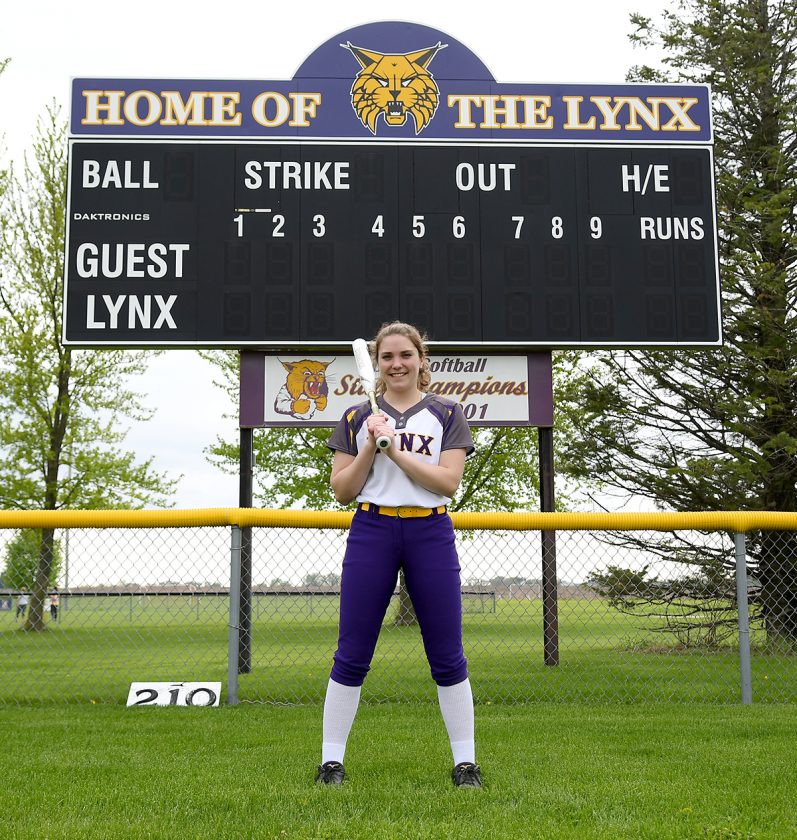 WEBSTER CITY — Looking too far into the future is the last thing Zoey Woodle wants to do right now. It’s too hard, too raw to think about what life will be like outside of a Webster City sports uniform.

That’s who Woodle is, that’s what she knows. Four seasons, four sports, and they’ve been her life.

“I’ve always loved playing sports and once I started I figured why stop?” Woodle said. “I thought I might as well do four years of four sports. It makes me stronger and, plus, I’m always in shape.”

The Webster City senior will walk way with 14 letters in all — four in track and softball, and three in volleyball and basketball — by the time August rolls around. But before then she has one last season to play, one last summer on the diamond, and she plans to make the most of it.

“I’m really excited for the season because I think we can do pretty well this year,” Woodle, a senior centerfielder for the Lynx, said. “It should be fun.”

Woodle is the catalyst for a WCHS softball team looking to improve upon last season’s 16-15 overall record and fourth-place finish in the North Central Conference (6-8). Humboldt has dominated the league landscape in recent years and the Wildcats will certainly be talented again, but the Lynx see themselves an upper-tier team in the NCC.

“Last year we had girls that had played for a year, but they were still young and they still made young kid mistakes,” WCHS head coach Jess Howard said. “I don’t see that this year. I feel like we’re ahead of where we were last year and we’re able to push (the players) a little bit further this year.”

WCHS lost speedster Haley Flaws and slugger Cassidy Nerland to graduation, but the remainder of the roster is intact.

And that starts with Woodle, an all-conference player who hit .414 with five doubles, 12 RBIs and 14 stolen bases a season ago.

But the Lynx have plenty of other offensive weapons.

Kelly Stoakes, just a freshman, burst onto the scene last summer and hit .394 with a home run, 11 doubles and 29 RBIs. Taylor McKinney hit at a .367 clip with a dinger and 26 RBIs. Jenna Miller put together a .348 average and plated 17 runs. Leah Kasch went yard once and drove in 14 runners. Cynthia Hill blasted a pair of home runs.

WCHS may not have the freakish speed that Flaws utilized night after night, but Howard feels like there are more than enough offensive options.

“We’ve got quite a bit of power,” she said. “We may be a little different than we’ve been in the past, but I still think we’ll be aggressive on the bases. We’ll be able to steal on teams, it may just be more of a surprise attack.”

Miller returns for her third summer as the No. 1 option in the pitcher’s circle. The right-hander has steadily improved since her eighth-grade season; last year she put together an 11-11 record and 3.97 ERA. Backing her up will be Atlanta Hopp and Stoakes.

“They’ve all grown in terms of strength and they’ve all got more behind the ball,” Howard said of her pitchers. “Jenna has put in a lot of time and she’s got more movement on her pitches now which should make it easier on the defense.”

WCHS is as solid as they come defensively up the middle behind Miller. McKinney owns one of the premier gloves in Class 3A at shortstop and Woodle uses her speed to cover a lot of ground in the outfield.

The Lynx will open their season at home against Algona Garrigan on Monday. The junior varsity contest is scheduled for 5:30 p.m., with the varsity to follow at 7 p.m.