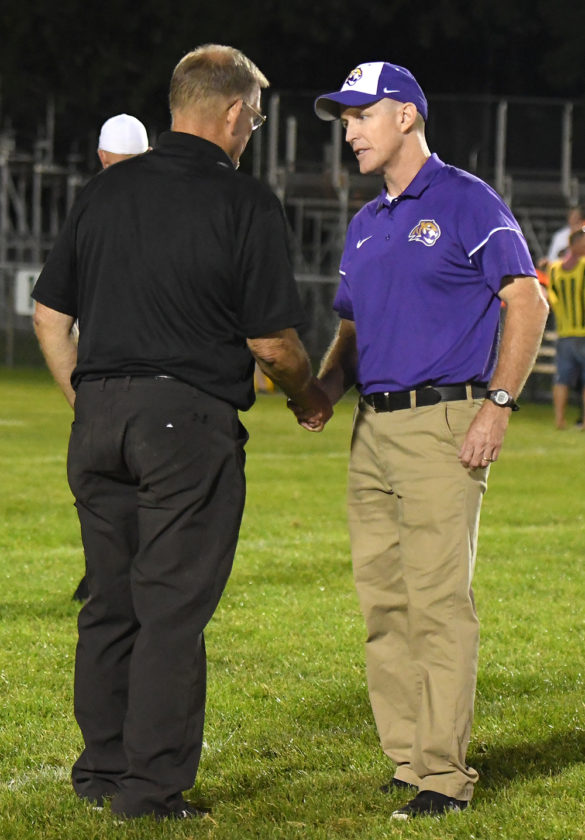 WEBSTER CITY — There was a smile on Jim Tighe’s face, an intensity in his eyes and a hitch in his voice as he took one last, long look at Lynx Field Friday night.

It felt weird, he admitted. He had watched Webster City get stuffed, play after play, for the better part of 48 minutes and he was happy about it. It’s no longer his home turf, but it will always hold a piece of his heart.

“It means a lot because my favorite memories are on that field,” Tighe, a member of the WCHS Class of 1987 and the head coach at Spencer, said after he guided the Tigers to a come-from-behind 28-14 win over the Lynx. “When I walked on that field, I mean, this is my childhood. I got a chill. So yeah, it meant a lot.”

With his dad and Iowa’s all-time wins leader Dick Tighe waiting for him with a matching grin on his face, Jim reveled in what his team was able to accomplish. After trailing 14-0 on a pair of one-play scores less than 9 minutes into the contest, Spencer owned the final three quarters and crippled the Lynx vaunted ground game.

The Tigers limited WCHS to just 64 yards rushing, its lowest total since Oct. 23, 2009, when Clear Lake handcuffed the Lynx for 55. It snapped a streak of 89 consecutive games where WCHS had rushed for at least 100 yards. 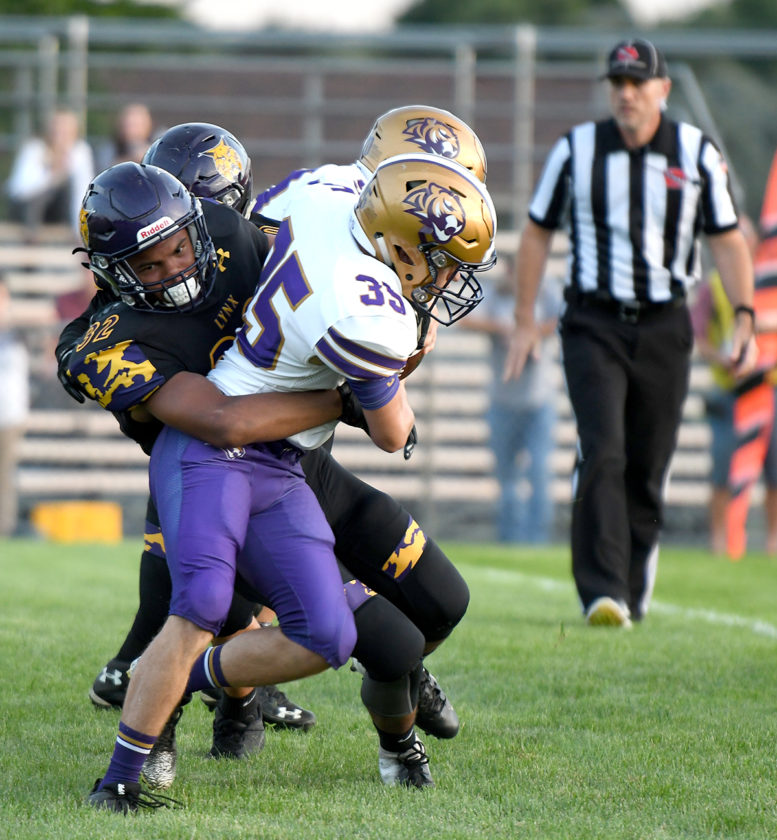 Tighe gave much of the credit to his scout team, which prepared the Tiger defense to face the single wing attack. Not far away, WCHS head coach Bob Howard had his own theory as to why the Lynx were stuck in neutral.

“They’re better than we are,” Howard said. “They’re bigger, they’re faster, they’re stronger … I don’t consider this losing. We got beat. We didn’t really make mistakes, but they stuffed us on offense.”

To compensate for the lack of a run game, WCHS (1-1) aired it out 20 times, the most in a game since Howard took over in 2007. Spinback Dylan Steen completed 11 of 19 passes for 124 yards, highlighted by a 41-yard touchdown bomb to Carson Struchen midway through the first quarter that staked the Lynx to a 7-0 lead.

Spencer (1-1) had no problems moving the ball on the ground. Quarterback Gage Garnatz sputtered in spots — he threw two interceptions, one of which was returned 40 yards for a touchdown by Trey Mathis — but he flourished in the triple option scheme and was the foundation for 377 yards rushing. The Tigers chewed up 246 yards in the second half and went on a 21-0 surge to take control.

Garnatz rambled for 137 yards and a touchdown on 21 carries. Fullback Isaiah Spencer tormented the Lynx on simple dive plays, which amassed 218 yards and a pair of scores on 30 totes. Isaac Pingel also reached the end zone once. 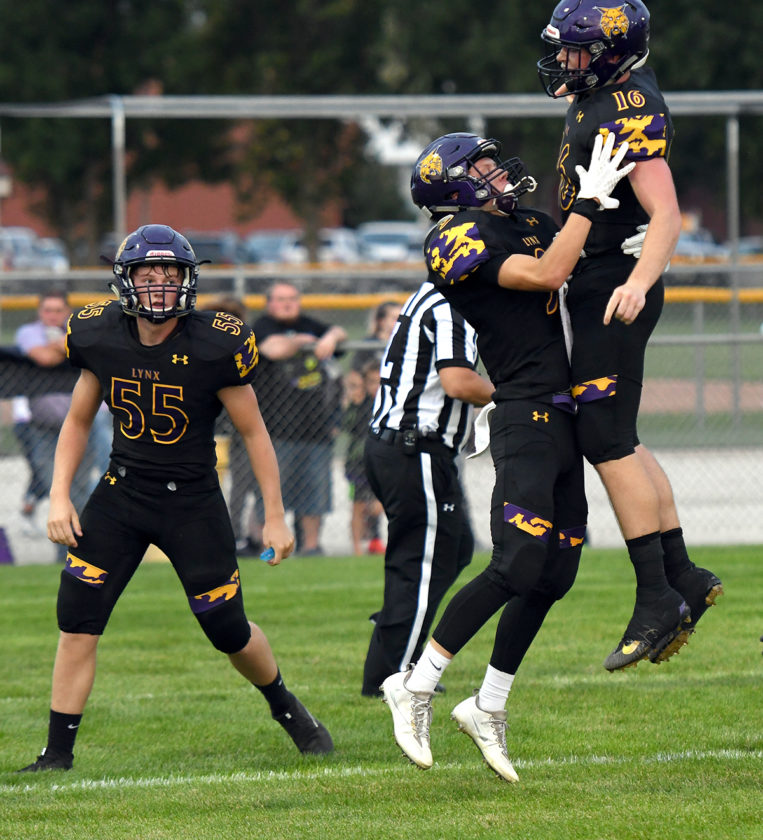 “It’s a very different offense, almost like the single wing,” Steen, who had an interception and 6 1⁄2 tackles at free safety, said. “It’s never really the same thing you can do over and over again.”

Caleb Olson led WCHS defensively with 10 1⁄2 tackles, including seven solo stops. He also batted the Garnatz pass into the air that landed in Mathis’s arms for the pick-6 that pushed WCHS ahead 14-0 late in the first quarter. But the senior two-time all-stater also shouldered some of the blame for the Lynx defensive woes.

“Defensively, it’s my fault for not getting things going,” he said. “It’s my job as a defensive captain to get everybody lined up and make sure we’re doing the right things. Part of the loss is on me, not only coach (Howard). I know he’s going to say it’s him, but part of it is on me.”

Despite trailing 14-7 at the half, Spencer out-gained the Lynx 157-83 over the initial 24 minutes. The Tigers ran 35 plays to just 16 for the Lynx. But WCHS was aided by three Spencer turnovers.

That offensive trend continued throughout the second half. Spencer ran 22 more plays in all and owned a more than 9-minute time of possession advantage. The Tigers also amassed 18 first downs to just seven for WCHS. 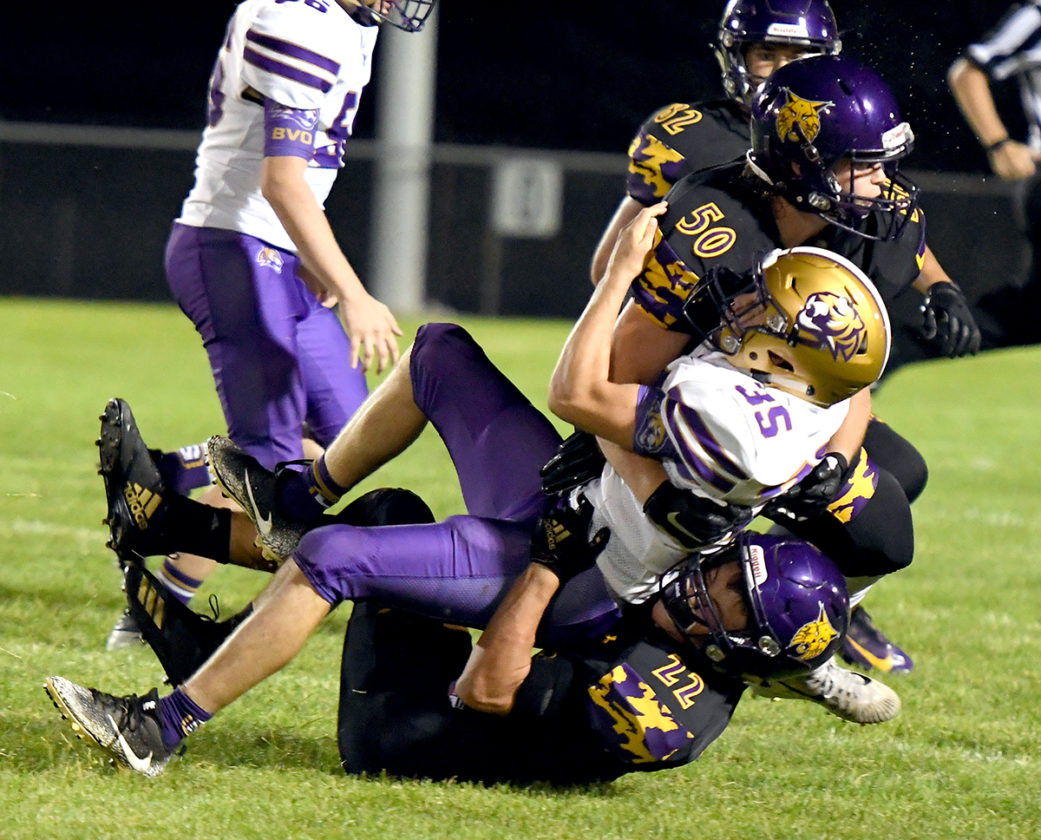 Webster City’s Cade Felts (22) and Hunter Collicott (50) team up to bring down Spencer running back Isaiah Spencer during the second half on Friday. Isaiah Spencer rushed for 218 yards in the Tigers’ win. DFJ photo/Troy Banning

“They were definitely better at what they do than we were trying to stop it,” Howard said.

A 79-yard drive to open the third quarter was capped by Pingel’s 4-yard dive across the goal line to make it 14-all. Nine minutes later, the Tigers moved in front for good on Spencer’s first touchdown, a 1-yard surge up the middle.

“We just kept plugging away and I think we got some confidence in that second quarter,” Tighe said. “I could tell at halftime that we were really sky high, we just needed to execute.”

WCHS went nowhere in the third quarter and turned the ball over on downs twice.

Steen’s interception early in the fourth quarter gave the Lynx a brief moment of momentum, but a quick three-and-out was followed by Spencer’s second touchdown — a 68-yard sprint right up the gut where he broke through a slew of arm tackles at the line of scrimmage before scampering the rest of the way to the end zone unscathed — that put the game out of reach. 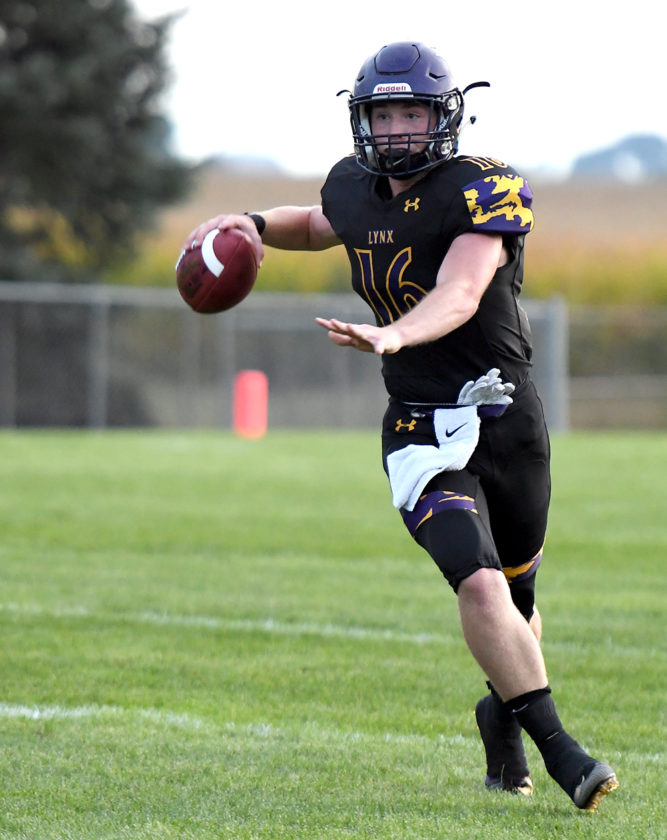 WCHS spinback Dylan Steen rolls out of the pocket as he looks for an open receiver on Friday. He completed 11 of 19 passes for 124 yards. DFJ photo/Troy Banning

After rushing for 162 yards in a Week 1 win over Gilbert, Lynx tailback Trace Kepler was limited to just 26 yards on 10 carries. Steen and wingback Drake Doolittle both finished with 21 yards on a combined 12 attempts.

“I think we just have to keep working our butts off and get better in all aspects,” Steen said. “We didn’t move the ball well at all.”

WCHS was undersized at the line of scrimmage and it played a pivotal role in the outcome.

“Our kids tried to play hard and it’s nothing against our kids,” Howard said. “Our offensive line should have learned a lot (Friday night) because we got fed our lunch up front. That’s going to happen because we’re giving up 30 or 40 pounds at dang near every one of those positions. But our pad level has got to improve.”

Webster City’s Cade Felts (22) and Hunter Collicott (50) team up to bring down Spencer running back Isaiah Spencer during the second half on Friday. Isaiah Spencer rushed for 218 yards in the Tigers’ win. DFJ photo/Troy Banning

WCHS spinback Dylan Steen rolls out of the pocket as he looks for an open receiver on Friday. He completed 11 of 19 passes for 124 yards. DFJ photo/Troy Banning