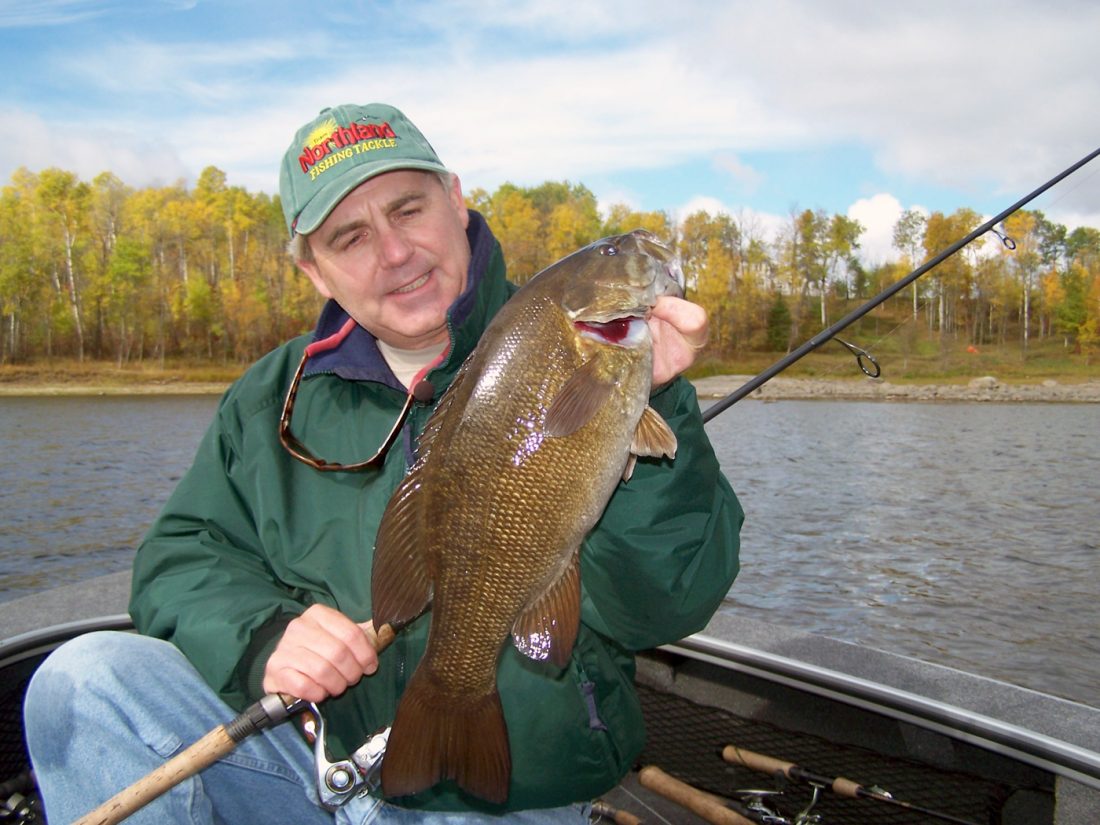 This river smallmouth ate John Peterson’s jig as it wiggled slowly in its face on a cold late season day.

Rivers, both large and small, crisscross North America. Many of those rivers are full of fish in a wide variety of species, and many of those species of fish like to get caught in the winter. Here are some ideas for catching those fish now and for the next few months.

Most rivers are home to several species of fish, but there generally is a dominant predator specie. In many rivers that dominant specie is the walleye: In lots of other rivers smallmouth or largemouth bass are more prominent. Usually though, a certain area of a river will have a dominant specie. In one stretch walleyes will be most abundant, as we move into another stretch of river, bass will be more prominent. If we want to be as successful as possible, we need to employ the technique that will be most effective for the specie of fish that is most abundant.

One presentation that will take pretty much any type of river fish pretty much anywhere in the river is a jig. We can tip the jig with either a minnow or a piece of plastic. In the toughest conditions it’s tough to beat a jig/minnow combination, but almost all of the time a jig/plastic presentation will do the job very well. On recent fishing trips, the Strike King Rage Swimmer body has been a winner. The 3.25″ size will be about right most of the time. This plastic body has a subtle action, and in cold water, subtle is often better. In clear water go with more natural color combinations, in stained water bright is often better. However, an orange or chartreuse jighead is frequently a good place to start. Experiment with color combinations, jig one color, body another color, and let the fish show you what they want. This rig will take almost every specie of gamefish found in a river.

It’s very important to use a jig that’s heavy enough to stay within a few inches of the bottom. River fish usually hug the bottom, so we want our bait close to the bottom. Try this: Hold your rod so the jig is just off the bottom. Allow the current to wiggle the tail while the jig stays in place, not moving forward or backward. Tap the bottom every few seconds, then move the jig up a few inches so the tail can work and the fish can see it. This will often convince a fish to bite even when they aren’t aggressive. You need to be sure to use a jig heavy enough so the current won’t quickly sweep it downstream.

It’s also very important to have a sensitive rod/line set-up. A rod in the six and a half to seven foot length in medium to medium heavy action will do a good job. Lew’s has several rods in this configuration that are very sensitive, but also have the backbone to provide an effective hookset. Spool up with 15 pound test XTCB-8 line for the ultimate in sensitivity and hooksetting. Some anglers like to use a two foot length of Tactical fluorocarbon in eight pound test as a leader, but in rivers the fluorocarbon usually isn’t necessary.

Winter fish will often be concentrated in rivers. Some very successful anglers spend a majority of their time just below a dam, others look for deeper holes a mile or two downstream from the dam.

There are lots of ways to catch river fish, but if you put a jig close to them, you’re probably going to get bit. Next time you get the chance, find a river that has open water, take your jig box and a few plastic baits or minnows, and find out for yourself that you can catch fish in open water even in the winter.

To see the most current and some older episodes of Fishing the Midwest television, fishing articles and fishing videos, and to enter to win a Vexilar depth-finder, go to fishingthemidwest.com

Don’t assume everyone sees your postings or articles or ads

I went to one of our local pottery places and watched them raku fire horsehair pottery. It was fascinating! I ...