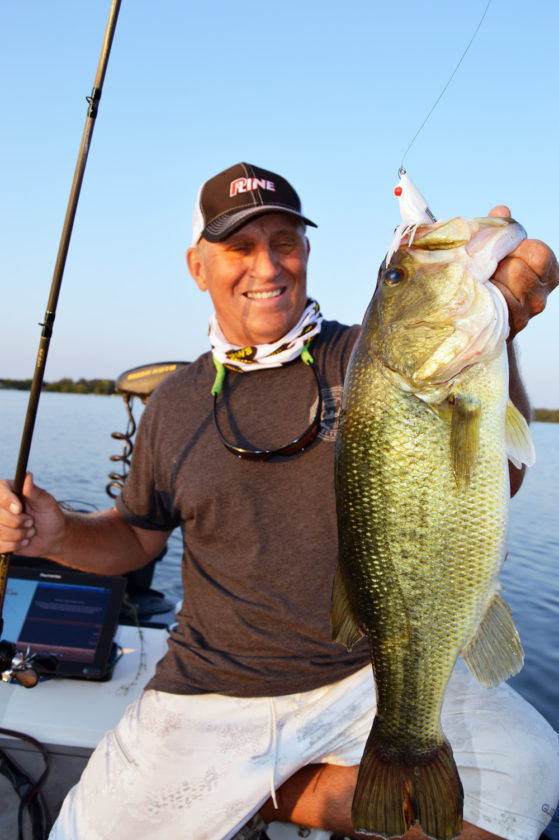 Mike Frisch with a jumbo Midwest bass taken on a KVD Frog.

I was with some fishing friends recently, and, as usual, the conversation turned to fishing. At some point the topic of “My favorite fishing technique” came up. I was asked what my preferred way to catch fish was. I couldn’t answer. I like to catch fish, any species of fish, and I will employ any technique that will help me catch more fish. But when pressed for an answer, I realized that I have two “Go-To” techniques. What really surprised me and the others in our group was that the two techniques were so different. Here’s the deal.

There are two ways that I really like to catch fish. I like to throw a small jig tipped with a minnow. It’s a time-proven finesse way to put fish, mostly walleyes, in the boat. Small jigs on light line. The bite is often very soft.

My other favorite way to catch fish is with a big bait in shallow, heavy cover. This is mostly a largemouth bass technique, and we’re using heavy, heavy line, heavy, heavy rods, and the bites are usually visual and viscous. Following is a little more about both techniques and how you can apply them to your fishing.

At any time of the year, but especially in the spring, I really like to cast Fire-Ball jigs to shallow water walleyes, shallow being less than 10 feet of water. It’s fun and, even better, it’s productive. I’m usually casting a sixteenth ounce round head Fire-Ball or an eighth ounce Stand-Up Fire-Ball. I use the Stand-Up head when the fish are liking a really slow presentation. With the Stand-Up head, you can let the jig sit on the bottom, but because of the style of this head, the minnow still remains up off the bottom and very visible to the fish. Even when the jig isn’t moving, the minnow wiggles a bit, and that’s often what it takes to get a walleye to eat it. This is when a sensitive rod comes in. It’s hard to explain what a walleye take on a jig feels like, but if you’ve experienced it, you know. Lew’s makes several rods that are outstanding for this technique. I like the Walleye model in the Lew’s Custom Speed Stick Series, but any of their 6’6″ to 7′ spinning rods in a medium light to medium action will work very well. Team the rod with a Lew’s Speed Spin reel, 6 pound test P-Line CX and you’re set.

Now my other favorite way to catch fish, specifically largemouth bass. This is mostly a summer deal. We’re looking for lily-pads or rushes or some sort of heavy weed cover over at least a couple of feet of water. We’re throwing Strike King’s KVD Frogs because they slide through this cover with minimal hang-ups and because the bass really like them. You’ll see every strike: Some will be just a small boil as the bass slurps the frog in, others will be explosive. A new bait for this style of fishing is the Pad Perch from Strike King. I look forward to introducing a lot of bass to the Pad Perch next summer.

This style of fishing requires a heavy rod and line. Again, Lew’s makes several that are very appropriate. Use a 7 foot rod in either heavy or extra heavy action and spool the reel with 50 or 65 pound test P-Line XTCB braid. The braid has no stretch, so it will get the fish coming to you fast. If you don’t get the fish coming your way quickly, it will wrap up in the cover and usually escape. 50 to 65 pound test sounds like overkill for a 2-6 pound bass, but it isn’t.

These 2 techniques are really fun and really productive ways to catch fish in open water, and I urge you to try them next open water season. For now, I’m going ice-fishing.