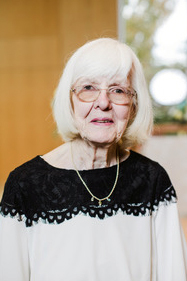 C. Ann Ruby Hemken, 88, of Williams, Iowa passed away July 14, 2020, at Heritage Care Center in Iowa Falls, Iowa. Private Graveside memorial service for family will be held on Friday, July 17, at 11:00 a.m. The Linn’s Funeral Home in Iowa Falls is helping the family with arrangements, and further information can be found at linnsfuneralhome.com. In lieu of flowers the family suggests memorials be directed to the Williams Public Library 216 Main St, Williams, Iowa 50271

Ann was born May 8, 1932, in Mahaska County, Iowa to J.L and Edith Ruby. The family moved to a farm near Williams in 1938. She was a Class of 1950 graduate of Williams High School. Ann majored in education at Cornell College where she graduated Phi Beta Kappa in 1954 and spent most of her senior year in Chile as a member of the International Farm Youth Exchange. Ann earned a Master of Arts degree in education from Iowa State University.

On August 15, 1954, she married Daryl Hemken in Williams and they farmed near Blairsburg. In 1962 they moved to Williams where they farmed until 1994 and then opened the Hemken Collection Car Museum in Williams in 2000, which she managed until 2018. Ann taught elementary school for 24 years in the Northeast Hamilton Community School District, retiring in 1990. She was an avid reader and loved to teach children to read. She served and was a member of many clubs and community organizations. She was a member of the Missionary Alliance Church in Blairsburg.

Ann loved her family and will be greatly missed. She is survived by four sons and daughters-in-law, Peter (Pamela) of West Des Moines, John (Kathleen) of Chiefland, Florida, Steven (Carrie) of Alden, and Philip (Ann) of Pleasant Prairie, Wisconsin; a daughter, Jennifer, of Brooklyn, New York; 15 grandchildren, 15 great grandchildren, and her sister, Jane Heirich, of Ann Arbor, Michigan.

She was preceded in death by her husband, Daryl, in 2005 and a great-grandson Mathew Hemken.