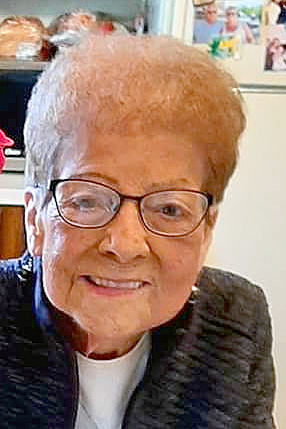 Jane Ellen Slauson of Webster City, Iowa, 87, passed away at Unity Point Hospital in Ft Dodge, Iowa on Thursday, April 9, 2020. A visitation will be held at the Boman Funeral Home (www.Bomanfh.com) from 2:00 – 6:00 PM on Wednesday April 15, due to current restrictions, the family will not be present. The family will be having a private burial at Calvary Cemetery in Webster City. A Celebration of Life will be held at a later date.

Jane was born on the family farm in rural Cascade, Iowa on August 22, 1932. She was the third of seven children, born to Joseph and Carmelita (Hoffman) McMullen. She attended country school until the 8th grade, then graduated from St. Martin High School in Cascade, Iowa. After graduation Jane worked for the Northwestern Bell Telephone Company as an operator. She met Duane Paul Slauson, the love of her life and they were married at St. Martins’ Catholic Church in Cascade. To this union four children were born: Susan, Michael, and identical twins James and Joseph. They lived in several small towns, Hopkinton, Greeley, Maynard and Webster City due to her husbands Duanes’ many promotions and as manager with the Spahn and Rose Lumber Company. She was Duanes’ right hand man and worked with her husband as the bookkeeper, payroll, and sales. She retired from Spahn and Rose after 40 years when her husband passed away. She also went to work for the HyVee Grocery Company when they opened their new store for 14 years.

Jane was a people person, and a member of St. Thomas Aquinas Catholic Church of Webster City, Women of the Moose, Elk Lodge, Webster City Country Club and the C.S.P. Club.

Memorial Contributions in her name can be directed to St Thomas Aquinas Catholic Church in Webster City.