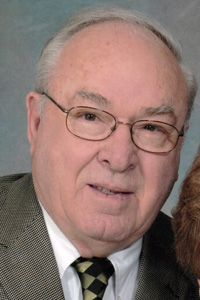 Robert O. Rieks, 83, of Story City, formerly of Alden, passed away on December 14th, 2019 at Israel Family Hospice House in Ames. Funeral services will be 11 a.m. on Thursday, December 19, 2019 at St. Paul’s Lutheran Church in Williams with burial in the Rose Grove Cemetery. Visitation will be an hour before the funeral. The Surls Funeral Chapel in Williams is assisting the family.

Robert Otto Rieks was born February 24, 1936, on a farm south of New Providence, IA, to Ewald Otto and Marion Irene (Cowell). He graduated from New Providence High School in 1955. On September 5, 1959, he was united in marriage to Kay Eide, currently of Iowa Falls, at the Alden United Methodist Church; they later divorced. To this union three sons were born: Rodney, Bradley, and Terry. On September 4th, 1998, Bob married Marilyn Swenson in Branson, MO. They lived on the farm until 2001 when they moved into Iowa Falls, later moving to Story City. Bob and Marilyn loved to dance, go out to eat, play cards with friends, and spend winters in Texas and Arizona. Bob was a hard working farmer, caring for his family, land, and livestock.

Robert is survived by his wife of 21 years, Marilyn, his three sons; Rodney (Conrad & Joe) of Minneapolis, MN, Bradley (Lynda) of Altoona, IA, and Terry (Julie) of Surprise, AZ; stepchildren Rob (Pam) Swenson of Williams, IA, and Robyn (Rusty) Stephens of Bondurant, IA. He leaves behind grandchildren; Cameron and Keaton (Courtney) Rieks of Altoona and Abby (Chris) and Daniel Rieks of Surprise, AZ; step-grandchildren Ryan (Elizabeth) Swenson, Tyler (Ashley) Swenson, and Collin (Grace) Swenson all of Williams, Tanner Stephens of Studio City, CA and Taylor Stephens of Tempe, AZ. He also was blessed with great-grandchildren Lydia, Vyolet, and Kallen Rieks, and step-great-grandchildren Nora, Brooks, and Brynlee Swenson. He is also survived by his youngest brother David (Sue) of Eldora, IA.

Robert was preceded in death by his parents and three brothers Roger, Richard, and Daniel.

Bob was loved dearly by his family and will be greatly missed. Our family wishes to thank everyone for the prayers, kind words, visits, food, and support during this difficult time.