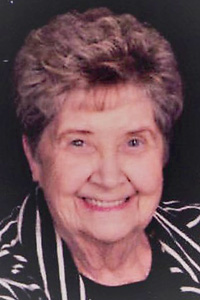 Marlene Ann Norman, daughter of Edwin and Harlene Asklund Dyvig, was born November 25, 1937 on the family farm by Kamrar. She graduated from Lincoln High in 1955. On May 11, 1956 she was united in marriage to John F. Norman at Trinity Lutheran Church in Webster City. Marlene held many jobs over the years in Webster City, including Morton Foods, Whiting Bookkeeping, ASCS office, Production Credit, State Farm for Debbie Veach, and the Hamilton County Clerk of Courts office from which then she enjoyed retirement.

Marlene was preceded in death by her parents; brothers, Jerome, Clifford and Orlan Dyvig; and sister, Beatrice Rojean Knutson (known as Sissy).

She was a member of Trinity Lutheran Church, the Red Hat Society, Tuesday Card Club, and the Webster City Country Club. Marlene enjoyed cheering on the Iowa Hawkeyes, eating out and especially spending time with her family.

Online condolences may be left to the family at www.fosterfuneralandcremation.com.