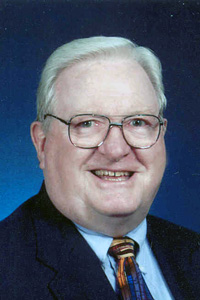 Jack Vaughn Klucking, 84, of Watauga, Texas passed away Sunday, April 14, 2019 in Fort Worth, TX. He was preceded in death by his parents, his brother Don; Sister Lois; and son Todd Klucking.

Born Oct. 9, 1934 in Woolstock, Iowa. He attended school in Webster City, Iowa, graduating in 1952. He served 2 years in the US Army. Jack married his High School Sweetheart, Marjorie Mae Montandon on October 9, 1955. He worked for the County Assessor for one year, followed by 37 years with Braniff, Ozark and TWA. Jack was the Director of Passenger Services in Seattle, Washington; Honolulu, Hawaii; Brownsville, TX and Philadelphia, PA. He traveled the world during his airline career. He moved to Forth Worth in 1994 and was employed by the City of Fort Worth Police Department for 14 years.

Jack played the piano by ear and was a Tenor Soloist. He was the first chair trumpet player in the Lincoln High School band in Webster City, Iowa from 8th grade through high school graduation.