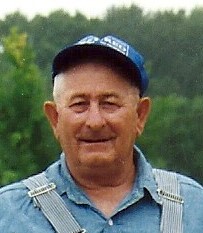 A celebration of life gathering for William will be held Saturday, February 2 at 2:00 p.m. at the Community Center, Dayton, IA. For online obituaries and condolences visit: www.carsonstappfuneralhome.com

William Arnold Murray was born on June 1, 1931 at Emmetsburg, Iowa, the son of Glen and Hazel (McClelland) Murray. He was educated at the Cutting country school near Brushy Creek. Bill served in the United States Army 1952-1954 and was stationed in Germany. He was honorably discharged in October 1954.

Bill was employed in several manufacturing, construction and farming positions during his lifetime and retired in 1993.

In addition to his parents, William was also preceded in death by his sister Rosetta Tuel, brothers, Elmer, Pat, Gene and Larry and infant daughter Trudy.

Memorials may be left to the family.