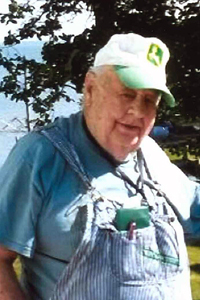 STRATFORD — Marlyn Gene Anderson 89, of Stratford, passed away peacefully with his family by his side on Sunday, January 13, 2019, at the Stratford Care Center.

Marlyn was born June 9, 1929, to Lloyd and Edna (Fallein) Anderson. He attended Country School #2 and graduated from Stratford High School in 1949. Marlyn was a lifetime member of the South Marion United Methodist Church. He was united in marriage to Dorothy Carlson on June 21, 1952.

Marlyn farmed the family farm. He worked for McCollough Brothers in Webster City until 1974. He then went to work for Heinrich Envelope in Boone as a delivery driver. He went by the nickname Andy and retired in 1995. He carried on the family tradition of an annual fishing trip to Leech Lake, Minnesota and their trips to Arkansas.

Over the years he enjoyed finding and fixing up antique John Deere tractors and cars both old and newer models including his current car.

Funeral Services will be 10:30 am Thursday, January 17, 2019 at South Marion United Methodist Church, 1392 390th Street, Stratford, Iowa. Interment will be at the South Marion Cemetery, Stratford, Iowa. Visitation with the family present to greet friends will be Wednesday, January 16, 2019 from 5:00 pm to 7:00 pm at the Calvary United Methodist Church, 901 Moore Street, Stratford, IA. Memorials are suggested to the family to be used at their discretion.

Schroeder-Stark-Welin Funeral Home is assisting the family. Online condolences may be left at www.schroederfuneral.com.