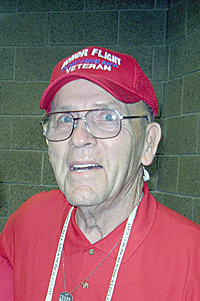 Luther Olson, 81, of Webster City, died Wednesday, January 16, 2019 at Unity Point Trinity Regional Medical Center in Fort Dodge. Memorial services will be held at 10:30 a.m. Monday, January 21, 2019 at Trinity Lutheran Church with Reverend Mike Kroona officiating. Burial will be in Graceland Cemetery with military rites. Visitation will be held one hour prior to the service at the church.

Luther Mark Olson, the son of Ole and Anna Huus Olson was born on March 20, 1937 in Clarion. He was a 1954 graduate of Clarion High School. Luther served in the United States Army from 1954 to 1957 during the Korean War. He married Bonnie Atwooll in Clarion. To this union three children were born. The couple later divorced. He moved to Webster City in 1977. Luther married Beverly Songer on March 31, 1978 in Sioux Falls, SD. Luther was a groundskeeper and custodian at Sunset Heights Elementary School with Webster City Community Schools for over 15 years, retiring in 1996. Luther was proud to be on the Honor Flight on September 7, 2013.

He was a member of Trinity Lutheran Church, the American Legion Post #191, Boone Valley Wood Carvers and Town & Country Garden Club. He enjoyed cooking, gardening, clowning around and being with family.

In lieu of flowers, memorials may be left for the American Legion Post #191 or Iowa Donor Network in memory of Luther.