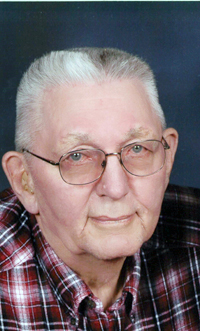 Dale Ahrens, 87, of Stratford, died Saturday, January 5, 2019 at Iowa Methodist Medical Center in Des Moines. Visitation will be held Thursday, January 10, 2019 from 2:00 p.m. to 3:00 p.m. at Stratford Lutheran Church. A private family service will be held at a later time.

Dale John Ahrens, son of Andrew and Clara Murkin Ahrens, was born November 12, 1931 in Boone County. He attended St. Paul’s Church School. Dale served in the United States Air Force from 1952 to 1956. On May 24, 1952 he married Donna Glee Carlson in Stanhope. The couple resided in Vermont while Dale was in the service, later returning to Stratford. He was a carpenter, owning Ahrens Brothers Construction with his brothers Dean and Jean. He also worked at Electrolux for over 10 years.

He was preceded in death by his parents, his wife, Donna; brothers, Edward, Lawrence, Warren and Ray Ahrens; sister, Iris Frazier.

Dale was a member of Stratford Lutheran Church and the Stratford American Legion Post 576.