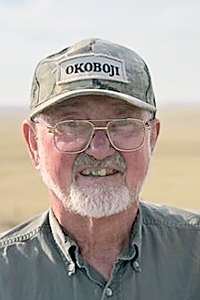 Visitation will be Friday, February 1, 2019, from 5:00 to 7:00 p.m., at the Church of Christ in Webster City. Funeral services will be held 10:30 a.m., Saturday, February 2, 2019, at the Church of Christ. Pastor Chad Halbach will officiate. Burial will be at Graceland Cemetery in Webster City. Military Graveside Rites will be conducted by the Webster City American Legion Post #191. For online obituaries & condolences visit: www.carsonstappfuneralhome.com

James Caroll Claude was born on May 10, 1942, in Woolstock, Iowa, the son of James and Enid (Doolittle) Claude.

Caroll graduated with the Webster City High School class of 1960. Following high school he served in the United States Army National Guard until his honorable discharge in March of 1964. He then furthered his education at St. Ambrose University in Davenport earning a degree in accounting.

On June 19, 1965, Caroll was united in marriage to Anne Claude, the love of his life, at the Church of Christ. Their marriage was blessed with two daughters: Elaine and Rochelle.

Caroll and Anne lived in Eldridge, Iowa, and later Pekin, Illinois, where he worked as an accountant at Caterpillar, Inc.

In October of 1998, the couple retired and built their current home in Woolstock.

He was preceded in death by his parents, wife, Georganne “Anne” Claude, sister, Virgene Young, and brother-in-law, Jim Caquelin.

Caroll’s family finds comfort knowing that he has been reunited with Anne, and is now at peace.