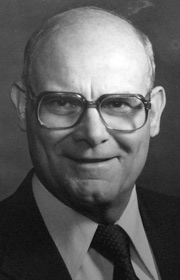 Robert W. Nissen, 92, of Webster City, died December 20, 2018 at Van Diest Medical Center. Memorial service will be held on Saturday, December 22, 2018, 2:00 p.m. at Asbury United Methodist Church with Pastor Jeff Flagg, officiating. Private family burial will be held at Graceland Cemetery. Visitation will be one hour prior to the service at the church.

Robert W. Nissen, son of Lulu Krafft and Gustav B. Nissen was born, July 24, 1926 at Belmond, Iowa He received his education at Webster City schools and graduated from Lincoln High in 1944. He served aboard a Navy LST from 1944 to 1946 in the Pacific Theatre. Following his discharge from the United States Navy he attended Iowa State University. He was a member of Signa Alpha Epsilon. Subsequently returning to Webster City he joined father Gus in the family business known as The Nissen and Son Packing Co. On June 4, 1950 he married Norma Jean Hesseltine of Webster City. Upon the death of his father in 1956 he became owner and President of The Nissen Company and expanded the company into a large Processed Meats operation.

In addition to his parents, he was preceded in death by his sister, Lucille Evans, and son-in-law, Keith Vegors.

During his 41 years in the meat industry he held many trade association National offices, was co-founder of the Iowa Independent Meat Packers Association, Chairman of the National Independent Meat Packers Association, and served on the Board of the National Livestock and Meat Board. In Webster City he served on the following boards: Chamber of Commerce Board, Country Club, and School Board. He was a lifelong member of Asbury United Methodist Church and was a long-time Director at the First State Bank.

Bob and wife Norma had a great love of traveling the United States in their motorhome, spending the winter months in Scottsdale and Texas, the summer months at their home in Clear Lake, and touring many countries in Europe.

Memorials may be directed to Kendall Young Library or Asbury United Methodist Church in memory of Robert.