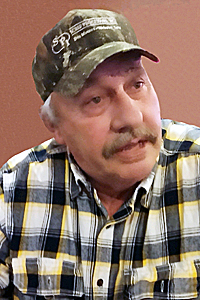 Randy Dean Hilpipre, son of Glen and Patricia Wells Hilpipre, was born May 6, 1954 in Woolstock. He married Debra Jondal on January 15, 1972. The couple resided in Webster City, later moving to Kamrar, then Woolstock and most recently, Reed Spring, MO. He worked various jobs, the last ones being Van Diest Supply Co., North Central Turf and Scrap Processors. He also helped his uncles and friends farm.

He was proceeded in death by his special son, Matthew Mark in July of 2015; parents; grandparents; aunts; uncles and sister-in-law, Connie Walker.

Randy loved remodeling and fixing everything at every house he and his children lived in. He loved the outdoors, hunting, fishing, boating and racing his stock car #51 for many years all over Iowa.

In lieu of flowers memorials may be directed to the family. Please dress casual.