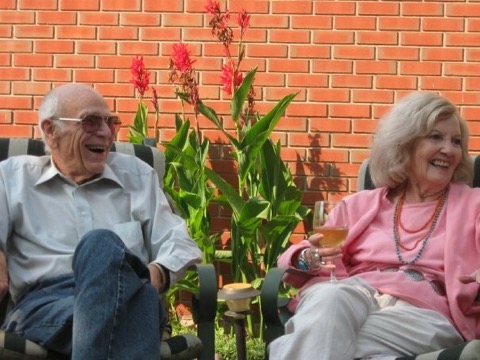 A celebration of life for Jed and Dorothy Norris, longtime Stanhope residents, is set for Saturday, January 12, 2019, 3:30-6:00 p.m., at the Stanhope Community Center.

A romance that began in Audubon High School when Dorothy Priestley offered to help Jed Norris carry his books after he broke his leg playing football lasted through a long and loving marriage until Jed passed away on October 29, 2010, when he was 79. Dorothy joined him on December 10, 2018, at age 88.

After they graduated with the class of 1949, Dorothy was employed at the Audubon newspaper while Jed attended Parsons College and later the University of Iowa College of Dentistry. Jed and Dorothy were married February 4, 1951. Jed enlisted in the U.S. Army, which led to a three-year tour of duty in Heidelberg, Germany, where he and Dorothy lived with their young family.

The Norris family moved to Stanhope in 1967 and settled into life there as Jed established a dental practice that later included offices in Stratford and Hubbard.

Dorothy contributed to the Stanhope community in many ways over the years–Stanhope city council, JM Club, Commercial Club, Stanhope Centennial, United Methodist Church, Stanhope Parish, library board, poll worker, and Hamilton County SEED. She was a steady and respected member of each board where she served. In her spare time, Dorothy loved to read; if she didn’t read every book in the Stanhope library, it wasn’t because she didn’t try.

One of the couple’s favorite activities was traveling, including trips with their grandsons and Army buddies. One of their favorite destinations was South Padre Island, Texas.

Along with their affection for traveling, Jed and Dorothy loved their family, which grew to include daughter Nila Zanker and husband Clayton of Stanhope and son Jon and wife Rosa of Pensacola, Florida. Also surviving are five grandsons: Garren (Cara) Zanker of Webster City; Ryan (Josie) Zanker of Lincoln, Nebraska ; Wes (Shaunna) Zanker of Stanhope; Greg (Joy) Zanker, of Cedar Rapids; Jed Norris (Mindy), of Fairhope, Alabama; and one granddaughter, Jasmine (Paul) Silivos of Pensacola, Florida. Jed and Dorothy were blessed with ten great-grandsons and three great-granddaughters. Also surviving is her sister, Virginia Windust of Waukee.

Dorothy was preceded in death by Jed in 2010, their daughter Nancy Jo in 1959, her brother Charles and sister Beverly.

Rather than flowers, any memorials can be directed in memory of the Norrises to Stanhope Parish, Stanhope Public Library, and Israel Hospice House of Ames.