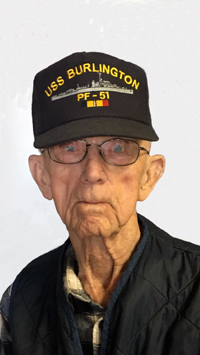 Richard Duane Creek, the son of John and Zetta Norton Creek, was born on November 27, 1929 in Eagle Grove. He attended Eagle Grove Schools. He served his country in the United States Navy. Dick married Twila Koepsel on September 7, 1952 at the Little Brown Church in Nashua. He worked for the Chicago and North Western Railroad for five years and Frigidaire for over 30 years. Dick was a hard worker and also owned a lawnmowing business with Mike Johnson and a sodding business with Roger Spellmeyer.

In addition to his parents, he was preceded in death by his wife Twila; siblings, Herbert Creek, Johnny Creek, Ronnie Creek, Pauline Van Sickle and Bob Creek.

Dick was a member of Alcoholics Anonymous and received his 20 year chip. He enjoyed dancing with his wife, Twila, taking long walks, going to the races, eating breakfast at Coney’s and staying busy. He looked forward to car trips and spending time with people, especially his family. He was a loving father, grandpa and great-grandpa. Dick was truly a “character” and will be dearly missed.

In lieu of flowers, memorial may be left for Windsor Manor in memory of Dick.