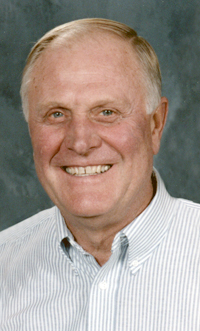 Jerry Luverne Elm was born on February 20, 1938 in Webster City; the son of John E. Elm and Wahneeta W. Davis. Jerry grew up in Webster City, IA. He graduated from high school in 1956, then he enlisted in the Iowa Army National Guard in 1956-1965. He was united in marriage to Janice Gramblin on May 8, 1960 in Webster City, IA, they enjoyed 58 years together. Over the years Jerry became self-employed. He owned and operated Elms Standard, Cedar Rapids, IA, Elm’s J & J Amoco in Marion, IA, he then retired in 1992 from Elms Auto Repair in Marion, IA. Jerry was very fortunate to be able to spend time with his family, friends, and enjoyed traveling in his retirement.

Jerry was an active member of Zion Lutheran Church, he belonged to the Lions Club in Toddville, IA and the American Legion Post #674, Toddville, IA. He was an active member in the Cedar Rapids Corvette Club. There was never a day that went by that he didn’t have a big smile on his face. He Loved God, his family and friends. He never met a stranger and would talk all day long if you let him.

He was preceded in death by his parents, brothers, Jackie Elm and Don Gorman, and his brother-in-laws, Cecil Gramblin Jr., Marvin Gramblin, and Gary Gramblin.

His love for God, family and friends was deep and unwavering. Jerrys warm heart and twinkle in his eyes embraced everyone he came across. He was blessed in that he never met a stranger.

Memorial’s may be directed to the family in Jerry’s name.

Online condolences may be directed to the family at www.cedarmemorial.com under Obituaries.