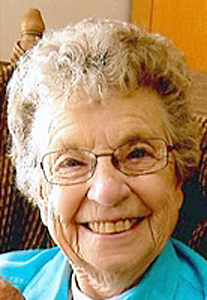 Darlene Mark, age 87 of Williams died on Friday, October 19, 2018 at Windsor Manor in Webster City. Funeral services will be 2:30 P.M. Sunday, October 28th at the United Methodist Church in Williams with Burial in the Williams Cemetery. Visitation will be 12:30 p.m. to 2:30 p.m. before services at the church. The Surls Funeral Home of Iowa Falls is in charge of arrangements.

Darlene Violet Mark was born on March 1, 1931 in Ackley, Iowa, the daughter of William and Helen (Voy) Hubrecht. She graduated from the Ackley

High School in 1949 and on April 20, 1951 Darlene was united in marriage to Earl Mark, Jr at the Little Brown Church in Nashua. She was a homemaker, and was a member of the United Methodist Church in Williams and the Harmony Club for over 60 years.

She was preceded in death by her parents; husband, Earl; two brothers, Wilbur and Orville; and a sister, Gwen.