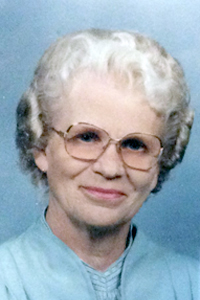 Charlene McKee, 92, of Webster City, died Monday, October 15, 2018 at Van Diest Medical Center. Memorial services will be held at 10:30 a.m. on Thursday, October 18, 2018 at First Congregational Church U.C.C. with Pastor Craig Blaufuss, officiating. Burial will take place at Graceland Cemetery following the services. Visitation will be held one hour prior to the service on Thursday at the church.

Delores Charlene Seiser, daughter of Charles and Fern Berogan Seiser, was born October 20, 1925 on farm near Webster City. She attended rural schools in Fremont Township and graduated from Lincoln High in 1942. She was employed in secretarial work until her marriage on January 26, 1947 to Harry B. McKee. The couple farmed south of Webster City all their married life. Harry died on October 8, 2000. Charlene continued to live on the farm.

In addition to her parents, she was preceded in death by her husband Harry; sons, Maynard in 1966 and Matthew in 1967; brother, Dean Seiser; sister, Maribeh Hill.

Charlene was a member of First Congregational Church U.C.C. and 50 plus year member of the PEO Chapter EL.

In lieu of flowers, memorials may be left to the First Congregational Church U.C.C. or Kendall Young Library.