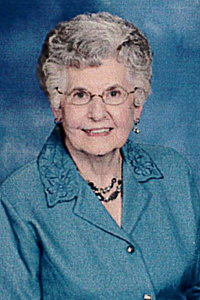 Mary Lou Jones was born on May 27, 1931, five miles north of Jewell on the family farm, the daughter of Floyd and Edith (McDonald) Jones. She graduated from Jewell schools in 1949 and from Iowa Central Community College in 1967. On June 30, 1950, she married Donald Lee Fisher at the First Federated Church in Jewell. Mary Lou worked at Hahne Printing which later became known as Webster Engraving. She was then employed at Montgomery Ward and later became a bookkeeper at Kayser Law Office. She retired in 2010 from Hamilton County Public Health.

In addition to her parents, she was preceded in death by her husband, Donald in March of 2006; daughter in infancy, Rebecca Ann Fisher in 1952; brothers, Keith and Carroll Jones; son-in-law, Pete Schnell.

Mary Lou was a member of Faith United Methodist Church, the Webster City Woman’s Club, Webster City Garden Club and the Prestige Club. She enjoyed birdwatching from her porch, was an avid gardener, loved nature, camping and campfires with her family. Her strong Christian faith was a source of inspiration to all. She was the best Mother, Grandmother and a friend to many.

Memorials may be left to the Iowa Arboretum, 1875 Peach Ave, Madrid, IA 50156 or the family’s discretion.

Condolences may be expressed online at www.fosterfuneralandcremation.com.