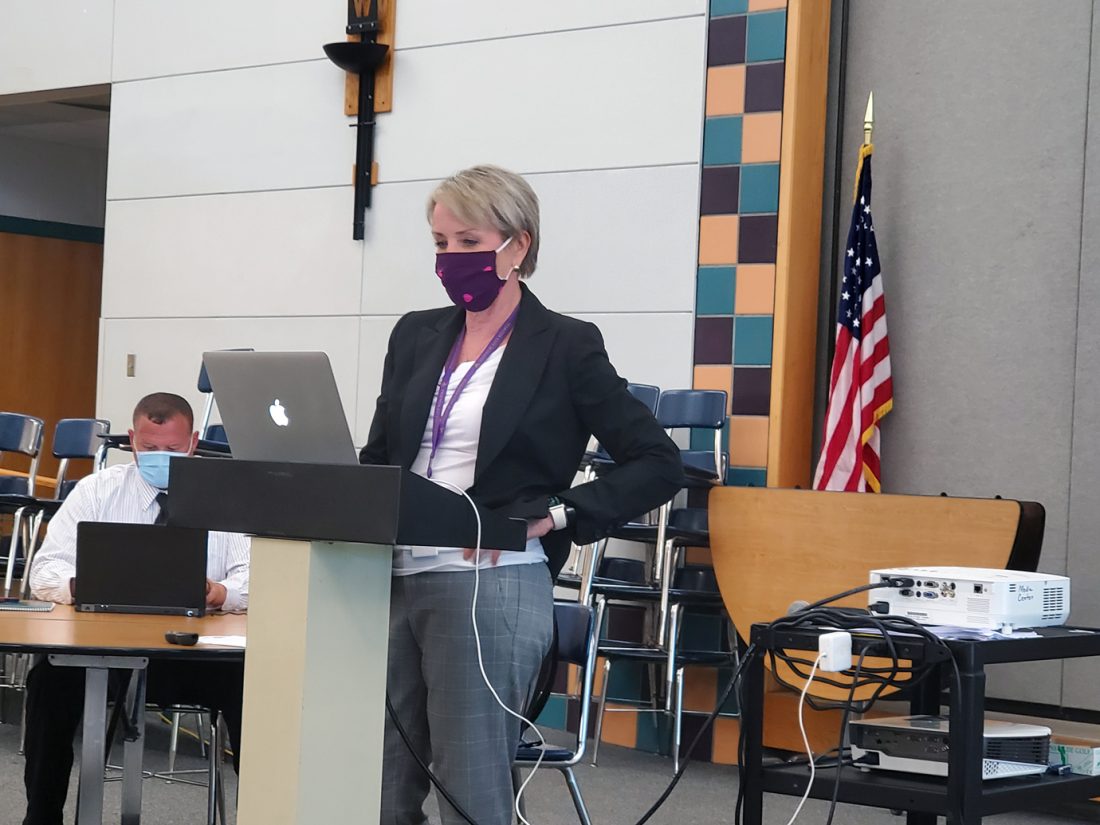 Dr. Mandy Ross, superintendent of schools, prepares to present a PowerPoint presentation for the Webster City school board Monday night at the Middle School Commons. The presentation reviewed the district’s plans to return to school in the fall.

Webster City School students will start the new school year on Monday, Aug. 24, though school officials admit they are still not sure what that new school year will bring.

Dr. Mandy Ross, superintendent, gave a presentation prepared by the district teams that have been working on a return to school plan. She started off the presentation with some details gleaned from an online survey sent to parents in the district. There were 560 responses to the survey.

“Keep in mind, we have about 1,700 students, so we could use some more input from families,” Ross said.

The survey revealed that of the 560 responses, 408 were in favor of sending the students back to in-person school this fall, while 25 said they were not in favor. One-hundred twenty-seven said they weren’t sure.

“It makes sense to me that a lot of people responded this way,” she said.

When it came to daycare, 427 answered that they had stable. This included families with students old enough to not need daycare. Eighty-three respondents said they had somewhat stable daycare and 36 responded they did not have stable daycare.

Some of the safety measures mentioned by the respondents included using face coverings, frequent handwashing and social distancing.

The Return to Learn plan outlines four options for area schools: in-person learning at the schools with mitigation procedures in place; hybrid one, with pre-kindergarten through 4th grade having face-to-face classroom time, and grades 5 to 12 working with an A-B schedule.

Ross explained that the A-B schedule would involve keeping groups of students in cohorts that would attend in-person classes either Monday and Tuesday or Thursday and Friday with the other days being remote learning classes. Wednesdays would be set asked for deep cleaning of the classrooms and common areas.

A third option would be hybrid two with all grade levels set up on the A-B schedule. The fourth option is remote learning for all levels.

There are some decisions that have been made for the school year, Ross told the board.

“We will also be limiting visitors to our buildings, including parents,” Ross said. “It’s all about making sure the students and the staff are safe.”

She added that the district is looking into possibly using face shields in some cases, noting that younger learners may do better being able to see the teacher’s face and mouth.

Ross said that district would not be taking temperatures as children entered buildings. With hundreds of students at each building, that wouldn’t be feasible on a daily basis. Ross added the temperature procedure might not identify those who are asymptomatic.

Each building will have a designated room for sick children. Parents would be expected to pick up the child as soon as possible, she said.

“At this point, everything is fluid,” she said as to which learning model the district would be using. “We hope to tell people at least two weeks before school starts which way we’ll be going.”

She said there would be more information at the board’s next meeting on Aug. 10. She urged families to watch the district’s website, Facebook page or the Infinite Campus portal for updates.

“We’ll adapt as the situation changes,” she said.