Osweiler’s gets back to business 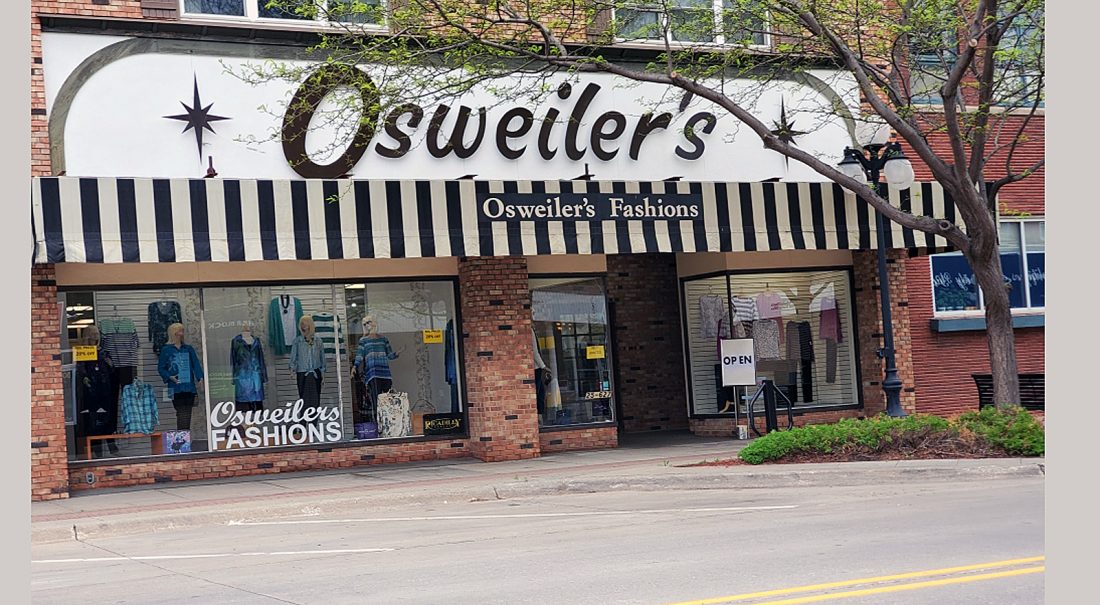 — Daily Freeman Journal hoto by Anne Blankenship Osweiler’s Fashions in downtown Webster City is once again open for business after being closed for nearly two months due to restrictions related to the COVID-19 pandemic.

article is part of a continuing

series on how Webster City area businesses are faring during the COVID-19 pandemic.

Osweiler’s Fashions in downtown Webster City is officially back in business.

After a two-month closure due to the coronavirus pandemic, longtime owners Kathy and Ron Birkestrand re-opened the doors to their loyal customers on Monday and have put in place a number of protocols to keep both their employees and shoppers as safe as possible.

“Our salespeople are wearing masks and we’ve observing social distancing,” Kathy Birkestrand said. “And anything that is tried on and not purchased is steamed before it goes back on the sales floor. We’ve been assured the temperature of the steam kills any virus.”

The owners of Osweiler’s since 1983, Kathy and Ron Birkestrand have also owned stores in Algona and Storm Lake for close to 20 years. They were forced to shut down all three locations suddenly on March 17, just two days after they were preparing for summer and spring purchases at market in Minneapolis.

“It was very sudden,” Kathy said. “We were in Minneapolis on the 15th, we came home on the 16th and locked up on the 17th, so I think that’s pretty fast.

“It’s been interesting. It’s nothing that any of us ever dreamed of going through before.”

Kathy says the closure afforded them time to do some refreshing in the Webster City store, and they were able to hold off on some of the orders they were planning on. But the two-month hiatus was anything but easy for the business.

“We’ve had this store since 1983, but if this had happened back in the first couple of years, we’d be out of business,” Kathy said. “But because we’ve been here as long as we have, we have been able to weather the storm. We live above the store, so for us we could come down to the office and work on things without being in the public.

“I can’t complain personally, but we don’t know when our customers will feel comfortable coming back in.”

Kathy admits that the re-opening has been better received by customers in the Algona and Storm Lake locations than in Webster City during the first few days, but she assures the local customers that there is plenty of spring merchandise on display.

“We have a store full of spring merchandise to sell,” she said. “Half of our merchandise is things we can reorder that people can wear year around, and then 50 percent is seasonal merchandise. We lost two months of sell time for spring, but we’ve got warm weather ahead, so we’re hoping people will come out and we’re hoping they’ll want to buy spring and summer things.”