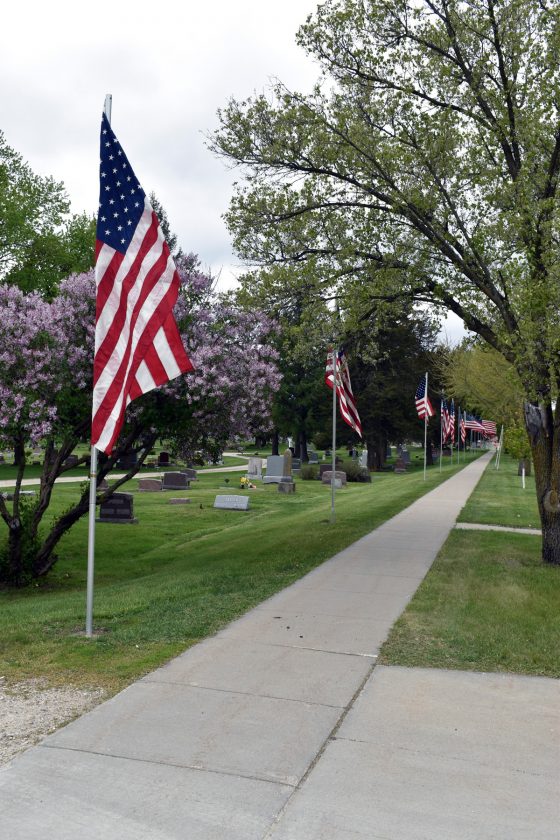 — Daily Freeman-Journal photo by Anne Blankenship Flags have been raised along Beach and Ohio streets in observance of Memorial Day in Webster City.

Monday is Memorial Day, and while things may seem a little different this year, members of the American Legion Post 191 are working to still provide a meaningful observance for veterans, their family members and the community in general.

Rich Stroner, legion commander, said that there would be no live service at Graceland Cemetery this year, due to social distancing and restrictions on crowd size.

However, the group will offer a Memorial Day service which has been prerecorded and will be broadcast on KQWC radio at 11 a.m. Monday. The service will feature an invocation, will recognize active duty service members as well as veterans who have died since last year. The broadcast will also offer a brief message from Stroner.

Following the broadcast, members of the Legion will gather on Seneca Street in front of the post office at 11:30 p.m. With a police car and a firetruck leading the procession, pickup trucks with flags will circulate through the community. Others are invited to join the procession, according to Stroner.

The group is still working on the route, but Stroner said the parade would travel past area nursing homes, the Elm Street house, and around residential areas. Stroner said the public is invited to step outside to view the procession.

In addition to the Memorial Day broadcast and parade, area residents are reminded that the Avenue of Flags is currently on display along Ohio and Beach Street.