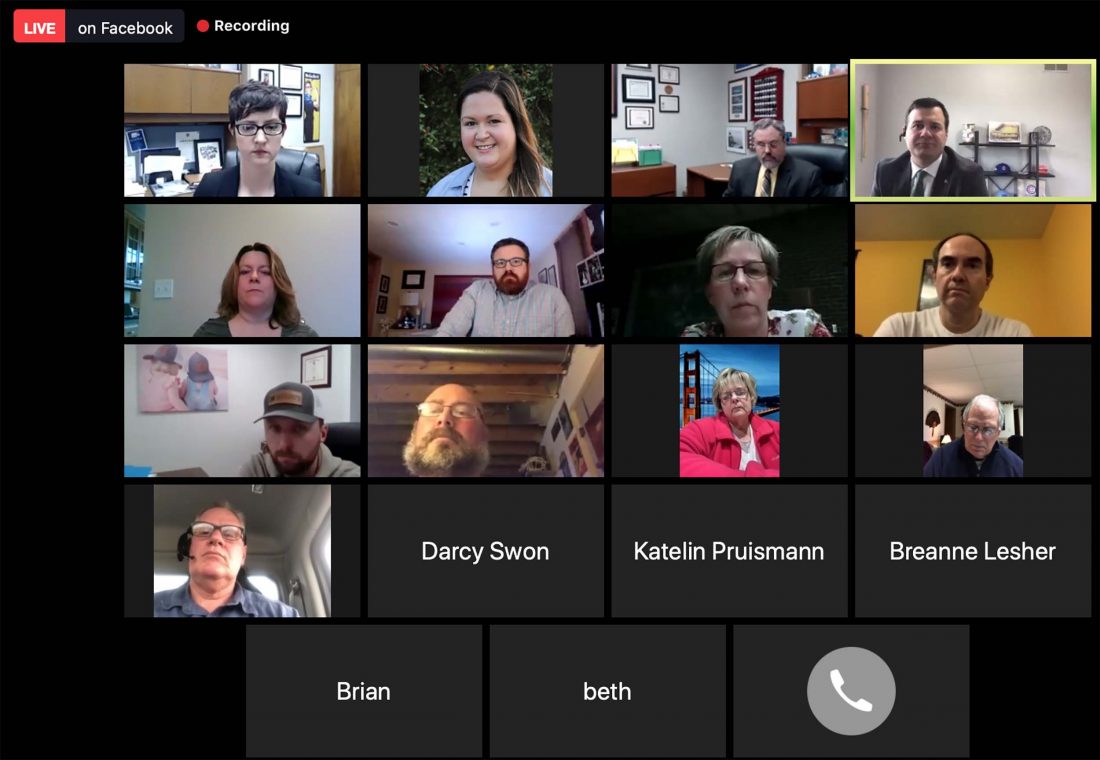 The Webster City City Council Monday night meeting was held on Zoom, a video teleconferencing program, to comply with social distancing guidelines due to the risk of the COVID-19 coronavirus. The meeting was also livestreamed on Facebook.

The council chambers at Webster City City Hall was oddly quiet and empty on Monday night, even though there was a city council meeting scheduled. Instead of the meeting at City Hall, the Webster City City Council held a virtual meeting using the video conferencing platform Zoom.

The Zoom meeting was livestreamed on Facebook for more members of the public to watch.

During the meeting, the city council held a public hearing on a proposal to enter a Road Use Tax Revenue Loan Agreement with Avalia Bank for $4,100,000, which will be used to finance the 2020 Second Street Reconstruction Project and a portion of the street department building project.

Funding for the loan will come from road use tax receipts and water, sewer and electric funds.

The loan was unanimously approved by the city council.

The council also held a public hearing on a proposed offer from Lindsay Henderson to purchase a 10-foot strip of a parcel of city-owned property located on East Dubuque Street.

The city owned the property, including a vacant and dilapidated dwelling, after obtaining it through the court system. The dwelling was demolished in December 2019.

Henderson offered the city $1,279.50 for the 10-foot strip of land to resolve an issue of a shared driveway. The offer price was established by taking the assessed value of the land and dividing it by the square footage.

The remaining portions of the parcel, which measures 64 feet by 165 feet, will be offered for sale in the near future by receiving sealed bids.

The council unanimously approved the sale and the proceeds of the sale will be put in the city’s general fund.

In other business, the city council passed an amended leave policy for the COVID-19 emergency. The policy, which meets or exceeds the requirements of the Families First Coronavirus Response Act, is effective starting April 1.

Under this amended leave policy, city employees may be eligible to use up to 80 hours total of COVID-19 leave in any combination, paid at their regular rate of pay.

The city council also passed a new resolution for the maximum property tax dollars, which was originally passed during the March 2 meeting.

“This is a repeat because I did not include the language to say exactly what the property tax dollar amount would be,” said Finance Director Dodie Wolfgram.

A series of real estate contracts was addressed during Monday night’s meeting.

Four city-owned properties were sold to bidders in February 2019 on the condition that the bidders rehabilitate the property. The four projects were given until Feb. 19, 2020, to complete the rehab projects. None of the projects were completed as of that date.

Tony and Betty Sponsel, who are working on 827 Water St.; Russell Mourton, 921 James St.; and Luis Orlando Martinez, 1421 Second St., have been making progress on their projects and were each granted a four-month extension on the project, which can be extended further if satisfactory improvement is made.

The property at 806 Stockdale St., owned by Elise and Jeremy Timm, has not had any work done to it and the city staff has not received any response to letters, texts and phone messages left for them. City Attorney Zach Chizek will have a 30-day notice served on the Timms and then file an affidavit with the Hamilton County Recorder’s Office to have the property’s title put back in the city’s name.

A first reading of a proposed city ordinance was completed during the meeting. The ordinance, if adopted, will add six stop signs at three intersections.

The ordinance will go through two more readings before the council votes to adopt it.

The next city council meeting will be at 6 p.m. on April 20. The meeting will likely be held via Zoom again. Information on the Zoom meeting ID will be released on the city’s website prior to the meeting.