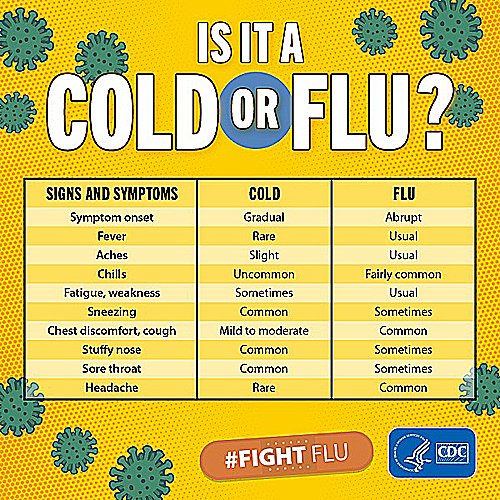 There’s something in the air and it’s not good.

Influenza, also known as the flu, has made an appearance in Hamilton County, reported Shelby Kroona, Hamilton County Public Health Director. It is also widespread in Iowa and across the nation.

“It is everywhere,” said Kroona. “We are approaching the peak flu season of late January and early February.”

Webster City Schools have confirmed several diagnosed cases of Influenza A and B, according to Webster City school nurse Lea Ahrens. While attendance has been affected by students battling the flu over the past couple of weeks, those absentee numbers have improved this week, she said.

“Some develop head colds as well,” said Sweedler. “They can start to feel better and then get a relapse.”

While many students are absent due to illness, the school has no confirmed cases of Influenza A or B, said Sweedler.

Kroona notes there is a difference between a cold and the flu.

“The flu has a fast on-set and it will hit you like ‘Bam’ while a cold begins gradually,” said Kroona.

The flu also tends to last up to ten days, explained Ahrens.  On the other hand, the stomach flu which includes vomiting and diarrhea may last only 2 to 3 days.

While the only way to properly identify Influenza A and B is through a medical diagnosis, there are other differences that help a person distinguish between the flu and a cold, said Ahrens.

The symptoms of the flu include a fever, quick onset of symptoms, general aches and pains, fatigue or weakness, extreme exhaustion, sore throat and chest discomfort. Often a non-productive, dry cough is present with the flu.

Fevers associated with the flu can climb as high as 100.4F or higher and can last 3 to 4 days.

Symptoms of a cold seldom include a fever. Most cold symptoms include mild fatigue, stuffy nose and congestion, sneezing, sore throat, chest discomfort and a cough that produces mucus.

Other symptoms such as headaches, aches and exhaustion are seldom present in a cold.

“Be vigilant on hand washing,” said Sweedler. “Wipe down every surface including cell phones, remote controls, tablets and computers.”

“Make sure you cover any cough with a tissue,” said Kroona. Keeping your house and personal space clean is especially important during the flu season. She recommends washing coats, hats, gloves, backpacks and scarves when the children are home from school.

Once the illness has passed, Sweedler advises flu and cold victims to replace their toothbrushes.

“Drink lots of water. Get lots of rest,” said Sweedler.

All three health professionals encourage home rest until any illness has run its course.

“We want students and staff to be completely free of any symptoms for a minimum of 24 to 48 hours to make sure of no relapse and exposure,” said Sweedler.

Kroona also encourages home rest for 24 hours until after a fever has subsided without the use of over-the-counter or prescription medications.