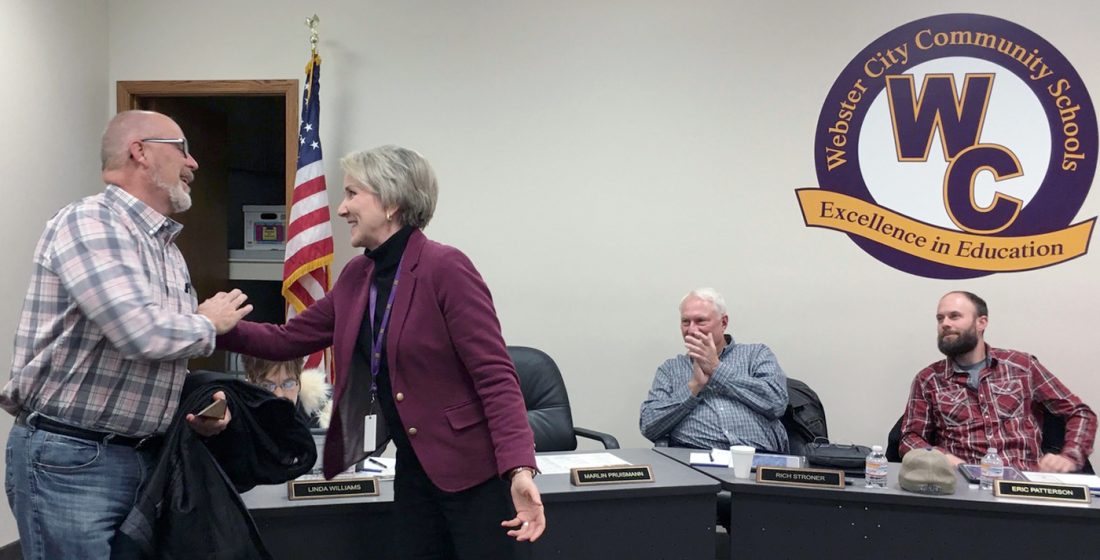 — Daily Freeman-Journal photo by Teresa Wood Dr. Mandy Ross presents Chuck Bonjour with his Webster City School Board nameplate as he retired from the Board at the beginning of Monday night’s meeting. Bonjour is the former Sunset Elementary School principal who stepped in last April to fill the unexpired term of Board Director Michelle Walters who moved from the district.

The Webster City School Board transitioned to a new board at Monday’s regular meeting and recognized a retiring board member.

Pruismann replaces Chuck Bonjour, the former principal of Sunset Elementary School who was appointed in April 2019 to fill the unexpired term of Michelle Walters who resigned due to a professional move out of state.   Upon his retirement from the board, Bonjour was presented with his name plate by Superintendent Dr. Mandy Ross with the district’s gratitude for his service.

The new board was then seated and Board Director Beth Van Diest was elected board president and Eric Patterson was elected vice president. The board also welcomed director Marlin Pruismann who was sworn into office by Ross on Nov. 25 via phone in order to conduct district business before Monday’s regularly scheduled meeting.

Webster City School District Director of Teaching and Learning Jama Hisler gave the board an update on the Iowa Statewide Assessment of Student Progress.

The ISASP replaces the Iowa Assessments and were administered for the first time in spring 2019 for students in grades 3 – 11 with school level assessments released by the Department of Education to schools and parents in November 2019, said Hisler.

The approval of the first reading of the board’s attendance center assignment policy was preceded by a report from Ross about student capacity in the classrooms.

“Our classrooms are getting pretty full and it happened a lot faster than we expected,” Ross told the board, noting that many classrooms are already at capacity. “Enrollment forced us to look at this a lot sooner than later.”

The capacity threshold will be 22 to 23 students per classroom, said Ross. Once a class reaches that number, the administration has the right to make classroom assignments.

Ross emphasized that students currently enrolled will remain at their school but future enrollees will be placed in classrooms either in Webster City or Northeast Hamilton.

The board approved a protective equipment fund transfer for the purchase of football rib and back plate protection pads.

The board approved the School Budget Review Committee’s request for an increase in the Modified Allowable Growth to $473,755.  The request keeps pace with the district’s increasing enrollment and the additional instruction for ELL students, explained Board Secretary Hildebrand.

The Board approved the district’s financial policies but tabled action on the establishment of an audit committee until further research is completed.  Supt. Ross noted that an audit committee would help address issues cited in the school’s annual state mandated audit.

The board approved contracts with the Mason City and the Sioux City school districts for student services.

The board approved the district’s hiring manual which establishes current practices.

The board graciously accepted the scholarship donation to establish the Cleo Graham Art Scholarship.  The endowment currently totals $200,000 but could climb to $500,000, explained Board Secretary Cathi Hildebrand.  The scholarship was established in October and is to be awarded to a Webster City High School graduate who participates in visual arts.  The district will need to appoint committee members who will develop the scholarship program including scholarship amount, number of individuals awarded annually and art medium.

“We are very grateful,” said Ross in accepting the endowment. “This is a phenomenal opportunity for some students.”

Shaylee Jordan, Dylan Bergantzel and students in Amanda Ross’ eleventh grade Revolution World Studies class gave a presentation to the board on their Central African Republic fundraiser.  The students studied the French Revolution and were asked to compare the 18th century revolution with revolutions happening in the world today.  Their research lead them to the current unrest in the Central Africa Republic where 14 warlords rule and make the country the most dangerous place in the world for young children.  Their research shows that two out of three children are displaced.

In a related matter, the students have developed a UNICEF funding campaign to purchase Plumpy Nut bars to the children.  The bars are highly nutritious and easily transported. Currently, students have raised $446 in a coin war and $208 for a jean and hat day.   The board approved their request to conduct a silent auction and partner with HyVee to round up customers’ cash register totals to the nearest dollar.

In board reports, Beth Van Diest applauded the district for hosting the LEGO League competition.

“It was wonderful to see and there was a lot of enthusiasm,” she said.

In her report, Ross asked the board to consider more detailed wording for protecting whistleblowers in writing future board policy.

Ross also reported on her own professional development plan.  Her goals include developing a plan for finding a replacement for retiring Board Secretary Cathi Hildebrand, revisit the district’s vision and mission statements, establish a five-to-seven year district vision and establish a personal work/life balance.

Many members of the Board look forward to the boys and girls basketball games scheduled at Jeff gymnasium on Friday, Dec. 13 and Ross said she has also looks forward to the experience and complimented custodial staff on preparing the venue.

“Kudos to Mitch Dunham for getting that accomplished,” said Ross.

Board Director Linda Williams hoped to have Ted Williams and Gary Bettis at their regular doorman stations on Friday.

The meeting adjourned at 7:05 p.m. The next regular meeting will be held on Jan. 13 at 6 p.m. in the Administration Board Room.