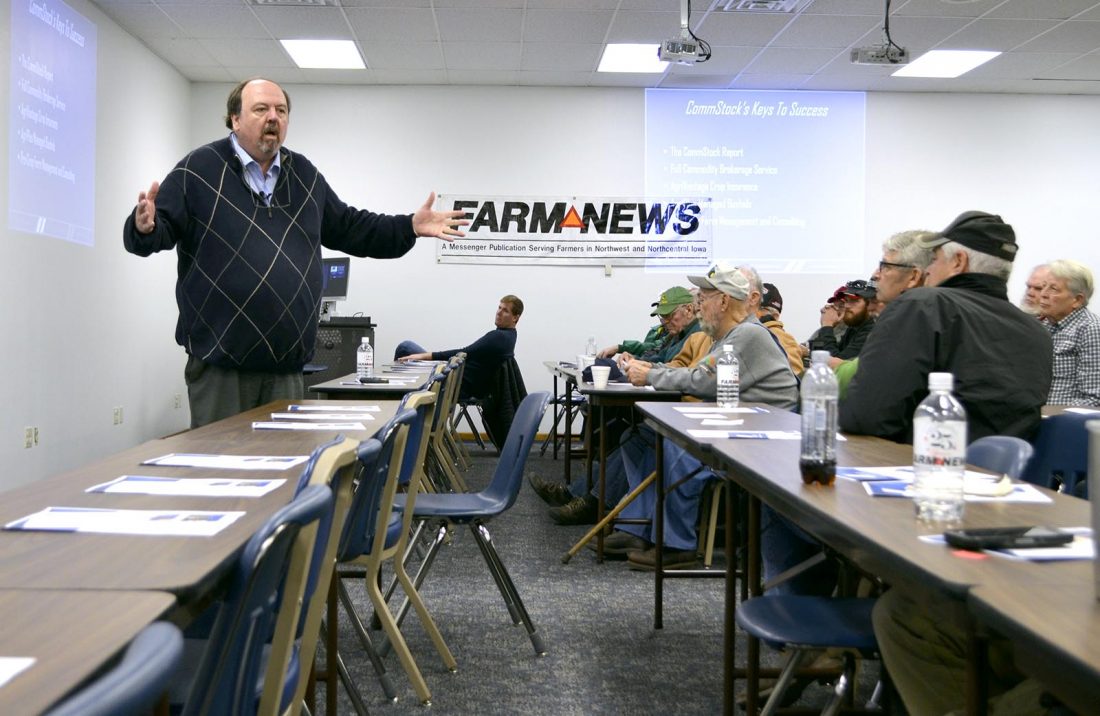 The 18th annual Farm News Ag Show kicked off Wednesday with more than 65 vendors on hand exhibiting both agricultural and non-agricultural products, bringing something for everyone to the show.

The beginning of the show was also an opportunity for Farm News columnist and president of CommStock Investments, David Kruse, to give his perception of a potential recovery within the ag sector coming in 2020.

“We do have some good news on trade,” said Kruse.

Currently Kruse said the administration is trying to finish ratification of the United States-Mexico-Canada Agreement (USMCA). Although there is no commercial impact from a ratification, it could still be a make-or-break situation for the agreement.

“Ratification is not going to make any dramatic market moves or impact,” he said. “Our problem is, is if we don’t get ratification it can blow up. We could lose what we have right now.” 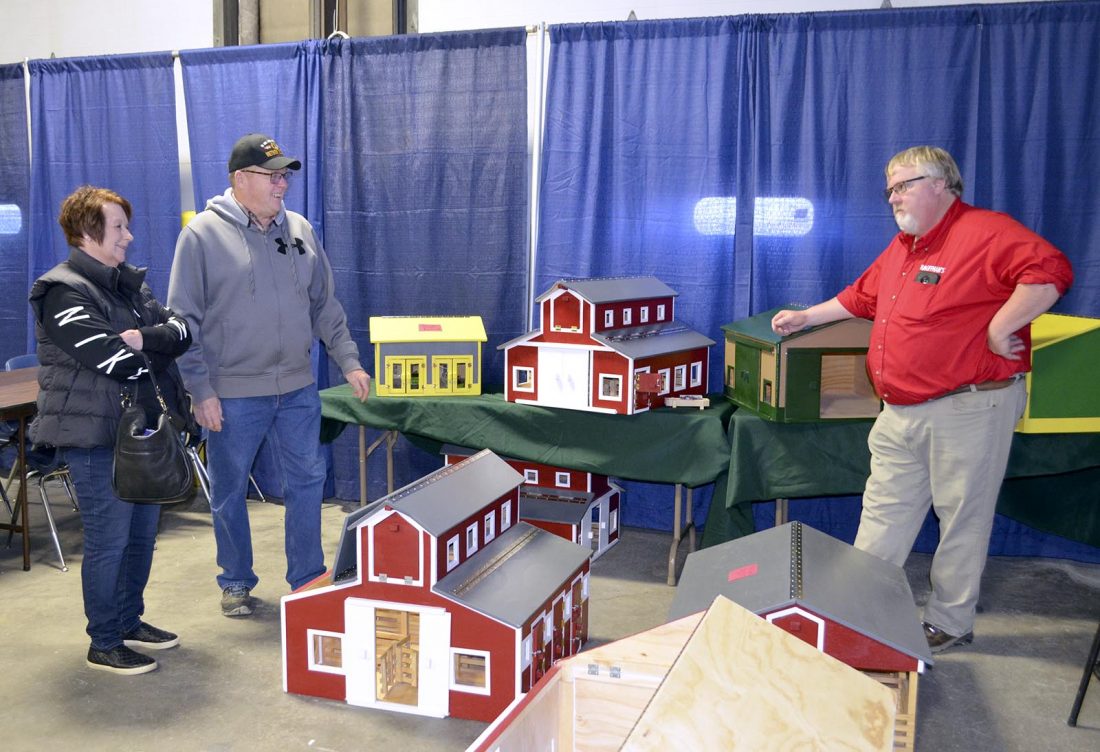 In the case of the new agreement with Japan, Kruse considers that agreement a “phase one” type of agreement. This agreement does not require any congressional ratification and is supposed to go into effect at the first of the year.

“We should see that playing field be leveled from that aspect,” he said. “In the case of Japan, we didn’t go with the TPP, so then the 11 other nations went ahead and adapted their own trade agreement and we started to see a negative impact on our exports to Japan on ag products.”

The TPP he referred to was the Tran-Pacific Partnership.

The USMCA and the agreement with Japan are just a few of the possibilities that can bring a much more constructive 2020, Kruse said, for the ag sector.

“First of all, we can get this ratification done with, there is some confidence then in the USMCA. We get the implementation of the Japanese trade agreement, which gets our playing field leveled,” he said. “Then, if Trump, I still expect, will make some kind of deal with China, for his own particular reasons and that will include some commodity purchases that should help us in the year ahead.”

Kruse said he hopes he is not over optimistic in those assumptions.

“At least a year or two ago, I could not have stood up in front of you and given you those possibilities,” he said. “They weren’t there. Today, at least situations have improved where I can.”

Kruse said he will be surprised if we don’t also see some more favorable rules for the Renewable Fuels Standard than what the Environmental Protection Agency initially came with.

“I hope there’s some benefit there — to get some of the ethanol moving again,” he said.

Kruse said he disagrees with the way President Donald Trump basically claims that trade deficits are theft in regards if someone sells you more than you buy from them, they’re stealing from you.

“You are getting the value from whatever you purchased,” he said. “If someone has a better, cheaper pair of shoes and you buy those shoes from that entity and they don’t buy or reciprocate — how did they actually steal from you? You got the shoes. You got what you bought. So, when there is a trade deficit, he acts like there are a half trillion dollars of theft going on here and that is simply not accurate. It’s not true. It’s nonsense in that aspect.”

“That means we would have a tariff on everything they would be sending to this country if that follows through,” he said.

China has retaliatory tariffs on nearly all of the $110 billion it buys from the United States.

“If we go tit for tat, tariff for tariff, we win,” said Kruse. “But, we really don’t, because we end up paying for those particular tariffs and it ends up coming back on us. It’s the buyer of the goods that ultimately end up financing the tariffs.”

Looking at an election year next year, Kruse said he believes the president realizes he either has got to make something happen, to put the ag sector in a better position, or he is going to be politically vulnerable with several of the agricultural states, including Iowa, that he needs for this election.

“He very much has touted the value of the farm vote and that is some leverage on our standpoint,” he said.

Kruse said Trump is wanting to move forward on a phase one deal with China. This deal would essentially commit China to buy around $40 to $50 million annually of goods from the United States.

But what does that exactly involve?

Kruse said both China and the United States need a trade deal.

“China is under pressure from these tariffs,” he said. “It is making them very uncomfortable, requiring them to do a tremendous amount of stimulus to maintain their economic growth from the pressure that has been put on them.”

Kruse said on the American side, the ag sector has been “getting hammered” by the trade war and Trump would like to give some good news that makes the markets improve.

“We have had a lot of claims from him about the wonderful things he has done for farmers, but you will notice the markets haven’t responded. They are skeptical for there are some empty promises there,” he said.

“Right now, Brazil is worried about whether we are going to get a trade agreement or not. They are hoping we don’t. This is very beneficial for them,” he said, adding he has personally been told Trump is the best president that South America has ever had.

“They (South America) have had some tremendous opportunities we have given them to take away some of our market share around the world,” he said.

Kruse said it is going to take some time to recover even after the trade war is over.

“There is this theory put out there that we are enduring some short term pain, but there is going to be long term gain,” he said. “Someone has got to explain to me, where the long term gain is coming from. I think that is a political myth.”

“This is going to have a long tail to it,” he said. “Once you lose your reliability, you are no longer the reliable market. It is hard to buy it back. It takes a lot of time to do it. The faster we can get this trade war over with, the better off we are going to be.”

Kruse said that everywhere African swine fever is present, there is an avenue of expansion to somewhere else.

“The two oceans, right now, are doing a great deal to protect us,” he said. “But to try to stop a virus, this particular virus, it has a lot of people awfully nervous as to what can happen. As long as it can stay out of this country, it ultimately is a market opportunity for us, but if that happens to change, it’s total devastation here, too.”

ASF has had a significant impact on world hog prices. Currently Kruse said China’s prices per hundredweight have increased to $306 while here in the United States it is $56.

“The United States is the lowest cost producer,” he said. “If it weren’t for the trade wars and the lack of access, we would be in much better shape to take advantage of this. I think it will happen.”