/Photo submitted In Iraq, Jake and Heidi Radkiewicz could lean on each other after bad days.

/Photo submitted Eagle Grove native Heidi Radkiewicz learned she would be deployed to Iraq shortly after 9/11 by herself. A few days later, she was told she could serve with her husband.

/Photo submitted Heidi and Jake Radkiewicz served side-by-side in Baghdad shortly after getting married in 2002.

/Photo submitted Heidi Radkiewicz, left, wrote a book in 2018 about her experience serving with her husband in Baghdad, Iraq, the honeymoon phase of their marriage.

/Photo submitted Heidi Radciewicz now lives with her family in Chicago. From left to right: Wyatt, her son, Jake, her husband, Heidi, and Summer, her daughter. 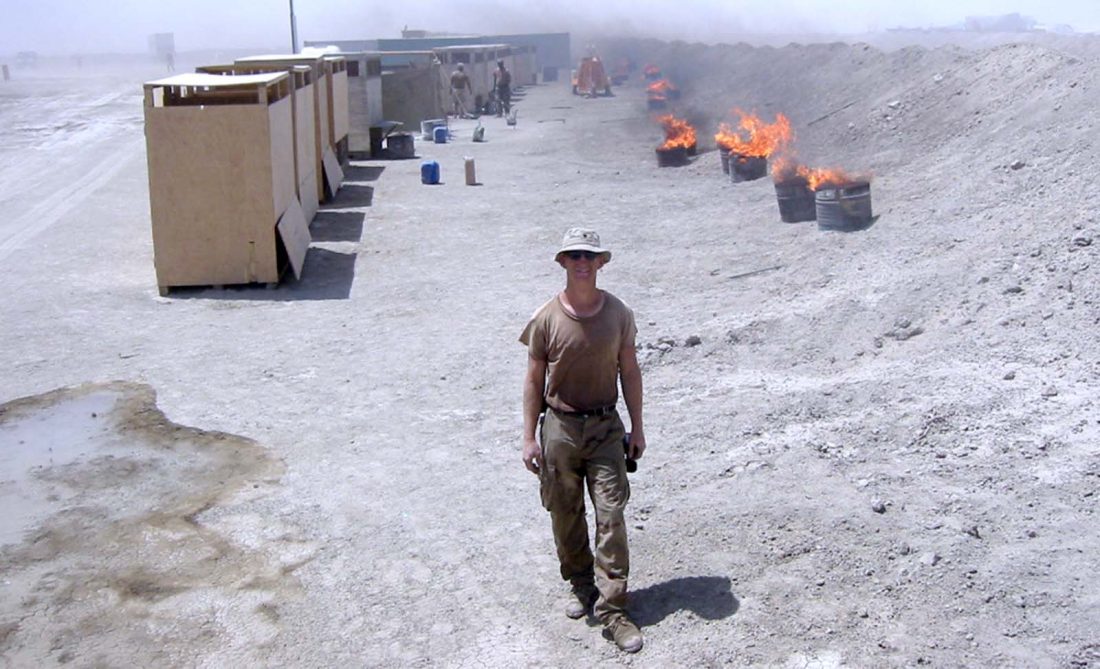 /Photo submitted In Iraq, Jake and Heidi Radkiewicz could lean on each other after bad days.

When Heidi Radkiewicz got married in 2002, a honeymoon was not in the budget.

“For us, a honeymooon wasn’t even in the works,” she said, after they paid a justice of the peace $25 to marry them.

But lucky for them, they got to spend the first months of their marriage on the U.S. government’s dime shortly thereafter, as they both deployed with the National Guard to serve in Iraq, side by side.

Despite the ambushes, extreme heat, sand fleas, kangaroo rats and scorpions, she says the enemy fire forged their relationship to be stronger than ever.

“It doesn’t get much more stressful and hard than having people try to kill you,” Radkiewicz said with a chuckle, making the point that if their marriage could survive that, it could handle anything civilian life had to throw at them. 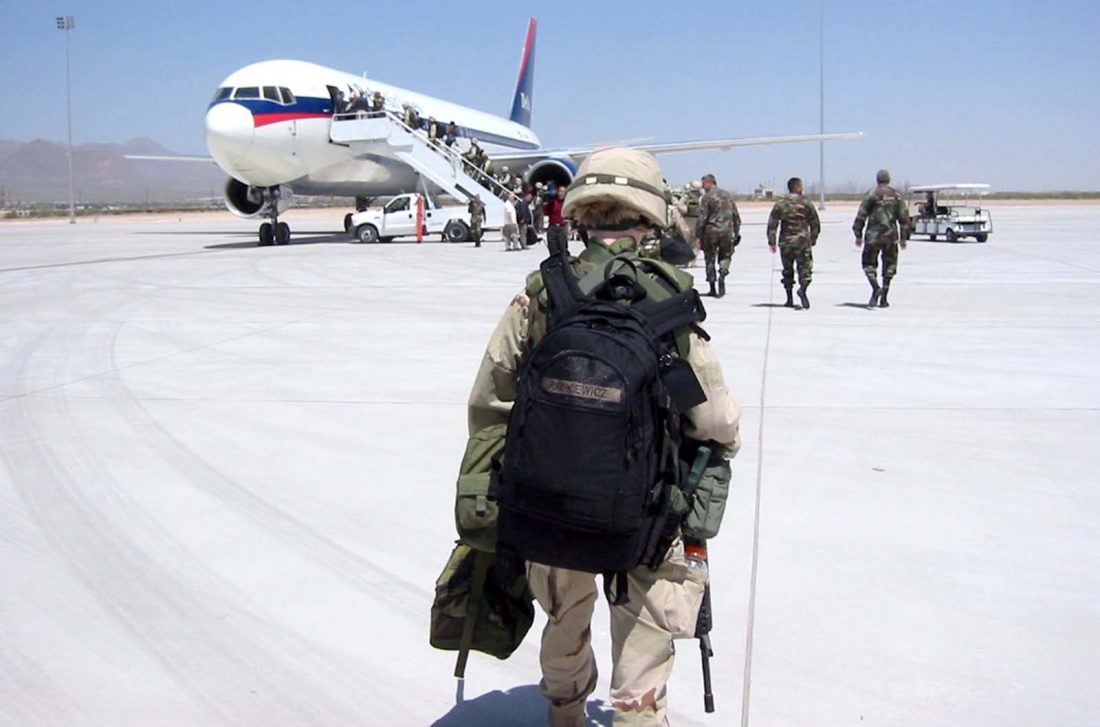 /Photo submitted Eagle Grove native Heidi Radkiewicz learned she would be deployed to Iraq shortly after 9/11 by herself. A few days later, she was told she could serve with her husband.

“Going to war just made it stronger,” the Eagle Grove native said, reflecting on her and her husband’s National Guard tour of duty after 9/11.

The couple, in fact, was brought together by the tragic event.

An atmostphere of uncertainty for those serving in the military brought about a cruel joke.

Heidi made the mistake of asking Jake, then a University of Wyoming student she did drills with, whether there had been news as to whether they would be called to serve overseas.

He said they had been, and that she should call her family and pack her bags. 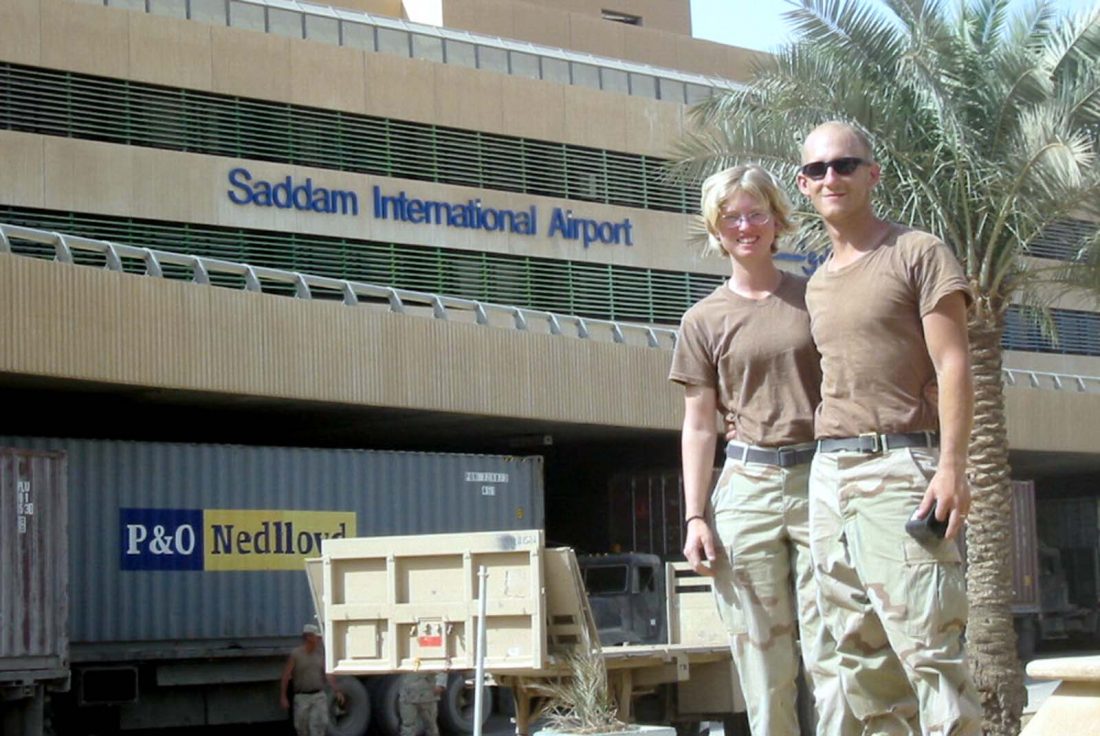 Jake’s friend let Heidi in on the joke.

“I kind of freaked out,” Radkiewicz said. “He felt bad about it.”

So he invited her over for dinner to apologize, and they’ve been smitten ever since.

In Baghdad, they found comfort at the end of awful days together on a cot, dragged out of the tent and into the sand, where they slept underneath the desert stars and the mosquito netting draped over them.

The sound of mortars being shot off is not something most newlywed looks forward to on their honeymoon. 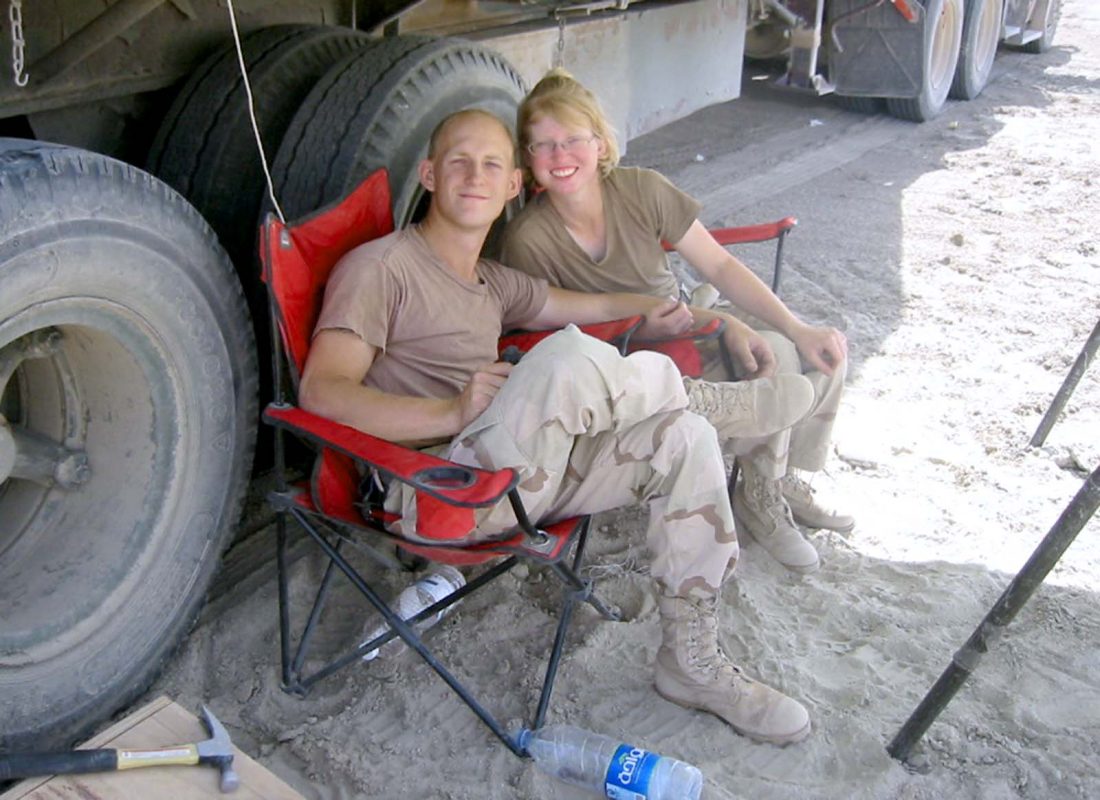 /Photo submitted Heidi and Jake Radkiewicz served side-by-side in Baghdad shortly after getting married in 2002.

Despite the mishaps and the stress, which has left both of them with PTSD, they wouldn’t have had it any other way.

Though many people can’t imagine working with their spouse, particularly in a war zone, the couple couldn’t stand being apart.

“It crushed us,” when they initially heard that she would be deployed without him, she said. “It was earth shattering.”

But being together in close quarters with other soldiers wasn’t exactly the ideal proximity, either. For the enjoyment of each other’s company, they had to get creative.

“We’d have to find places to have private time together,” she said. 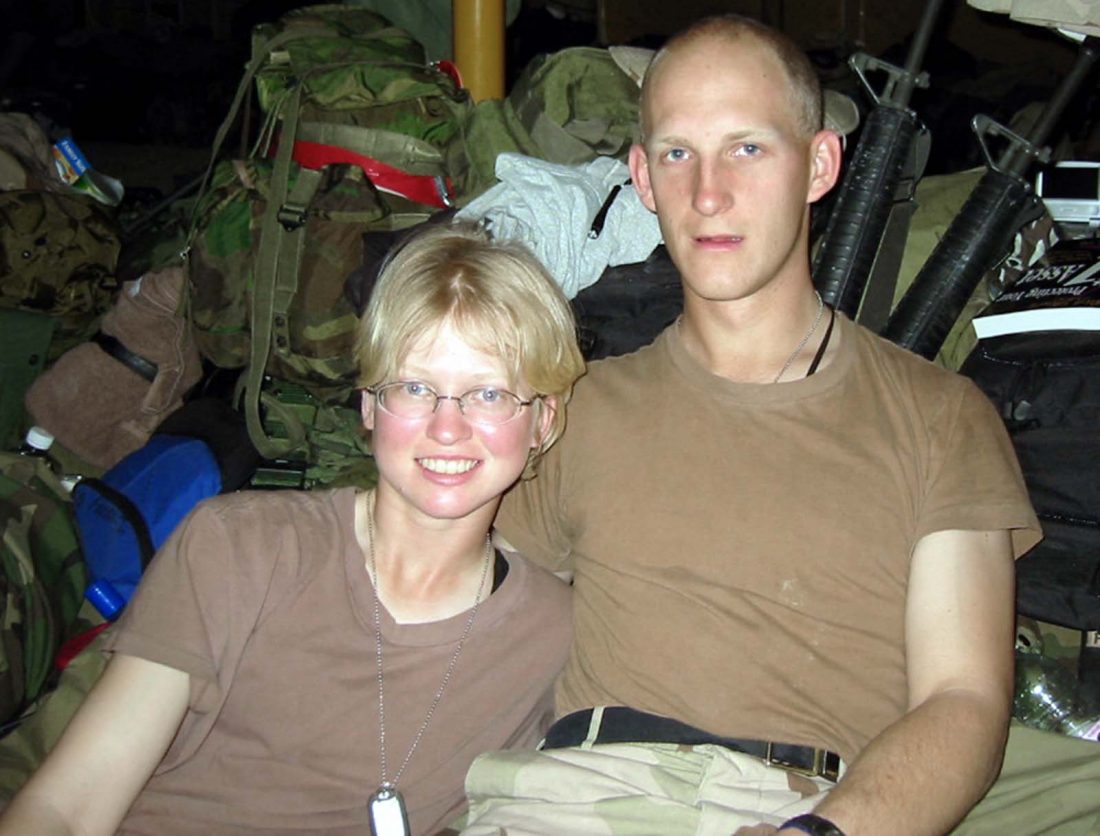 /Photo submitted Heidi Radkiewicz, left, wrote a book in 2018 about her experience serving with her husband in Baghdad, Iraq, the honeymoon phase of their marriage.

Sometimes it was in the old makeshift showers outside. Sometimes is was in the catwalk of the semi-trailer her husband drove.

“We’d try to do it incognito,” Radkiewicz said, but that didn’t always work out.

In such close proximity, it’s perhaps no surprise that they became even more inseparable — until she had to leave.

At a two-week retreat in Germany after serving for six months, she found out she was two months pregnant. At that point, she came back to Iowa to finish out a new mission: delivering a healthy baby.

But new ambushes surfaced at home, this time from her own mind. Defensive mechanisms acquired to carry out the missions in the desert wreaked a different kind of havoc on the home front. 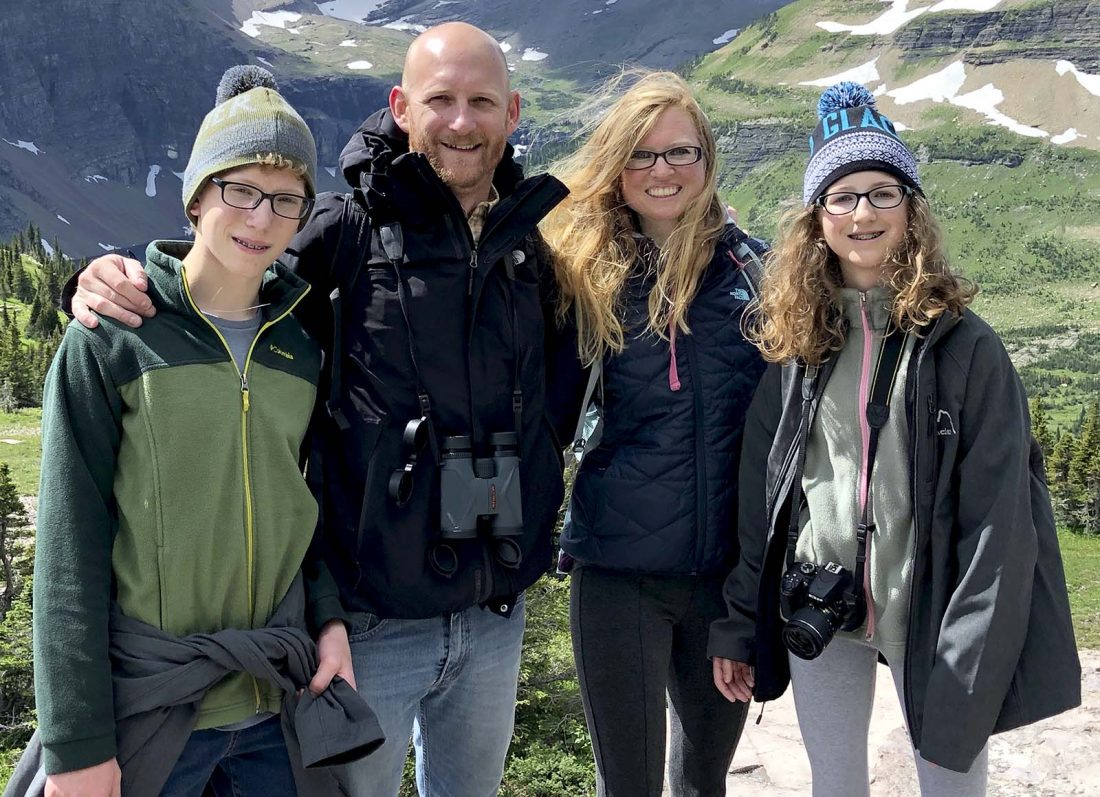 /Photo submitted Heidi Radciewicz now lives with her family in Chicago. From left to right: Wyatt, her son, Jake, her husband, Heidi, and Summer, her daughter.

Large crowds, trash on the side of the road and driving under bridges with people walking on them — things she would have thought nothing of before — now triggered unbearable anxiety.

“I had horrible anxiety. I would cry every day,” Radkiewicz said.

To this day, neither she nor her husband can mentally tolerate having their back exposed while sitting in a restaurant. Large crowds make them feel like they’re on a spinning swivel chair, wondering when someone will try to attack them.

“You don’t view things the same,” after you return with PTSD, Radkiewicz said.

But, if anything, she was grateful to have an understanding of the condition her husband would experience upon his return, too — an insight many army wives aren’t privileged to.

In the mean time, until her husband could come home, she lived for his phone calls and emails. But having gone through the experience overseas herself, hearing his voice wasn’t always enough to calm her fears.

“It was hard because I knew what he was going through,” she said, fully aware that military spouses don’t always tell the whole story to those at home, not wanting to scare them.

Though “no news is good news,” was her family relations policy while she served, she didn’t tolerate the same from her husband.

The first time they were attacked, they were on the same convoy, about 50 semitrailers long. Radkiewicz thought the pops she heard were the tires going flat, common in the extreme heat.

Abruptly, she woke up from her complacence and scrambled to find her rifle in a cloud of dust that kept visibility to mere inches.

She locked and loaded the rifle, pointed it out the window and pulled the trigger. It was jammed from prior sandstorms.

“I thought I was pretty kick-ass before,” Radkiewicz said, “but being deployed made me realize how strong I was, physically and emotionally. It’s pretty amazing what the human body can endure.”

Today, the Radkiewicz convoy consists of Heidi, Jake, Wyatt and Summer traveling whenever they can in their motorhome to their favorite places. The family lives in Chicago, where Jake Radkiewicz works as the vice president of an engineering department of a start-up.

Her book, “Honeymoon in Baghdad” is available on Amazon.

The veteran, wife and stay-at-home mom hopes all couples can benefit from the story of their journey across the world and back.