-Daily Freeman-Journal photo by Teresa Wood WCCSD Superintendent Mandy Ross and Northeast Hamilton Elementary Principal Jessica Hector conducted a faculty tour of NEH on Tuesday. The administration has been conducting open houses in order to familiarize patrons to the needs of the buildings within the district. An open house is scheduled at Webster City High School tonight at 5:30 p.m. 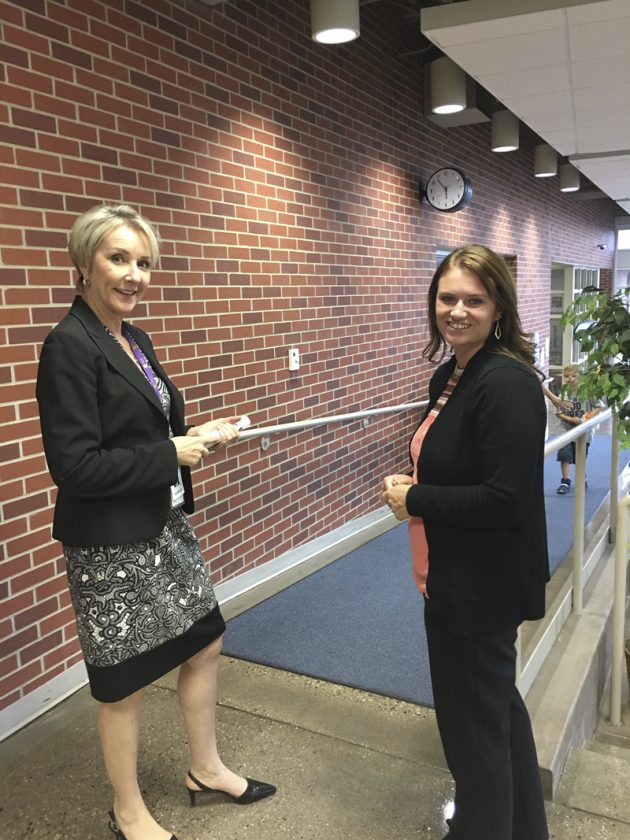 -Daily Freeman-Journal photo by Teresa Wood WCCSD Superintendent Mandy Ross and Northeast Hamilton Elementary Principal Jessica Hector conducted a faculty tour of NEH on Tuesday. The administration has been conducting open houses in order to familiarize patrons to the needs of the buildings within the district. An open house is scheduled at Webster City High School tonight at 5:30 p.m.

Repair and upkeep are a basic fact of life for property owners, and the same holds true for school districts.

That is why for the past month, the Webster City Community School District has been holding open houses to show district patrons the repairs needed in the school’s five instructional buildings, and to illustrate the need for an increase in the Physical Plant and Equipment Levy, a question which will be on the November ballot.

According to WCCSD Superintendent Mandy Ross, the school board has set three principles for school improvements – safety and security, maintaining district investments and practicing fiscal stewardship.

On Tuesday, Ross met with Northeast Hamilton Elementary School Principal Jessica Hector to conduct the tour of the Blairsburg school.

Hector noted that although the school board had done their due diligence in preparing the facility for the reorganization with Webster City on July 1, there were some problems that could not be anticipated. Throughout the summer, heavy rains continued to fall and water penetrated roofing where the old building connects with the 2009 building. Along that connecting wall, there is water damage on the ceilings.

Similar water problems have occurred in all the district’s school buildings where rain is not adequately draining from the roof, noted Ross.

“We are initiating a proactive approach with preventative roof maintenance to care for our facilities as a matter of routine,” she said.

Regarding safety, the district would like to install enhanced entrance security features in all the school buildings, Ross explained. Even at NEH where an entrance security system is in place, there is a need for additional safeguards such as securing the vestibule entrance between the main door and the inside doors, said Hector.

Throughout the district, there is also a need to provide ADA access, Ross noted. For instance, the parking lots and walkways near the athletic field concession stands have pea gravel as ground covering, which makes it difficult for people using walkers, wheelchairs or canes.

The recent spell of warm weather highlighted the need for air conditioning in all buildings, Ross added. On warmer days, the buildings heat up. But even though the temperatures cool down overnight, the buildings retain the heat. One of the worst locations is the second floor of the Webster City High School where conditions during the early fall and late spring can be “torture,” said Ross.

But these repairs and improvements come at a cost. In August, WCCSD School Board approved a levy question for the November ballot which calls for an increase in the existing levy from $0.67 to $0.77 in order to generate approximately $65,000 for PPEL funding. The increase would mean an additional $10 for each $100,000 of assessed valuation and the levy would be locked in for 10 years.

“We want to be fiscally responsible by maintaining our buildings without it having a huge impact on our stakeholders’ property taxes,” said Ross.

Building maintenance protects the taxpayers’ investment and that in turn provides a positive learning atmosphere for students, she said.

“We want to provide our students with the best learning environment that will match the high quality of education we provide in Webster City,” Ross explained. “We want our facilities to match the education.”