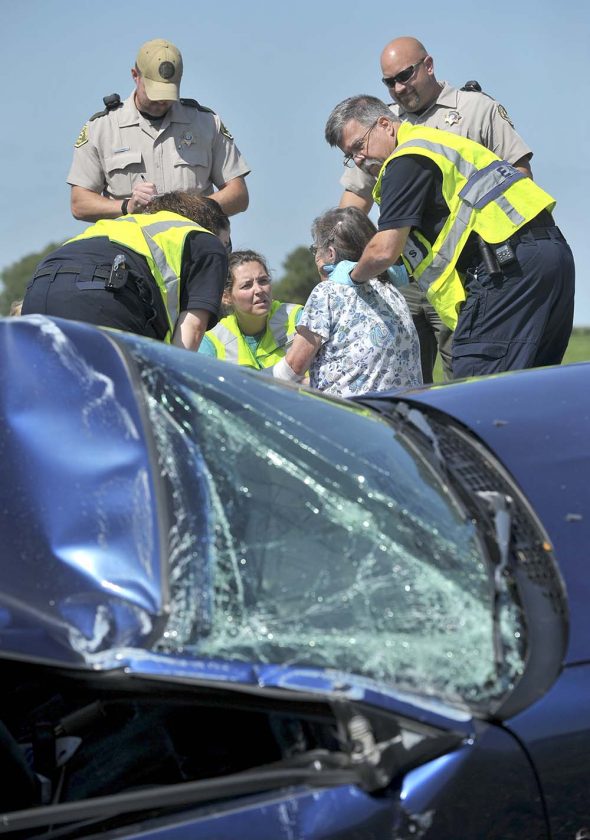 -Daily Freeman-Journal photo by Hans Madsen Fort Dodge EMT Loren Helgevold, right, tends to Judith A. Foster, 71, of Woolstock, at the scene of a roll-over accident Tuesday afternoon on 190th Street about a mile east of the Webster County line. Her passenger, Kristina Olson, 20, of Eagle Grove, was being treated by other rescue workers.

The driver, Judith A. Foster, 71, of Woolstock, and a passenger Kristina Olson, 20, Eagle Grove, were transported by ambulance to Trinity Regional Hospital in Fort Dodge for treatment of their injuries.

The extent of their injuries are not known at this time.

According to reports, Foster’s Chevrolet pickup was traveling west on 190th Street when she entered the south ditch. The truck traveled approximately 177 yards in the ditch. Foster tried to re-enter the roadway then rolled over, coming to rest upright in the south ditch, according to accident reports.

Sheriff’s deputies from Hamilton and Webster counties, firefighters from Vincent and Duncombe and paramedics from the Fort Dodge Fire Department responded.