Sheridan: ‘Best approach is to listen and learn’

New WC?city manager, brings wealth of experience to the job 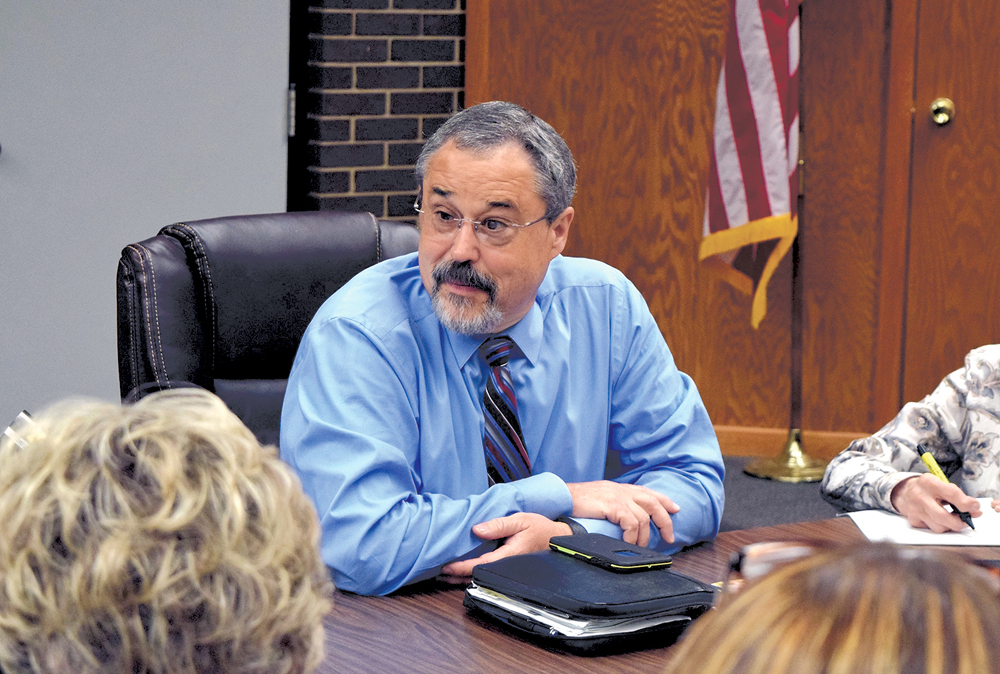 Editor’s Note: This article originally appeared in the September Our Hometown Magazine.

Sitting in his office in the Webster City City Hall, D. Jeffrey Sheridan is flanked by an Indianapolis Colts pennant above his desk and a Green Bay Packers poster on the back of his office door.

The native Hoosier was selected to be the town’s new city manager earlier this year and officially started on Aug. 19. Since his start, he’s been settling into the new role.

Sheridan is no stranger to town management — he has more than 30 years experience working in city government. Most recently, he was the town manager for the town of Lowell, Indiana. He’s also served in similar roles in the Indiana towns of Cumberland, Culver and Lawrenceburg.

Among other things, one of the factors that drew Sheridan to the Hawkeye State was his son, Jacob Sheridan, who is the city administrator for Anamosa in Eastern Iowa.

The main reason, however, was because moving out of Indiana would be good for Sheridan’s career.

“The primary issue was, while I’m a born and raised Hoosier and like everybody else, I certainly love my home state, it is not the best state to practice my profession,” he said.

Indiana is one of the few states that practices a “strong mayor” form of government, and only has about 90 city or town managers across the state, many of whom were not “professional managers.”

“And by that, I mean they went to school for it and they belong to ICMA, which means they adhere to a code of ethics that require them to give up being involved in partisan politics,” Sheridan said.

A city manager must be able to work for elected officials of any political party, he said. A town’s mayor or council makes policy, but it’s the city manager’s job to implement it. Even so, Sheridan said that at the local level, partisan politics rarely come into play.

“There is no Republican way to plow the snow and there’s no Democrat way to fix potholes,” he said.

His desire to work in a place where his profession of city manager is “more the norm” and is more recognized and valued is what brought Sheridan to Webster City.

In his first few weeks on the job in Webster City, Sheridan has been quite busy, learning about the community and the projects being worked on by City Hall.

There are two or three larger significant projects that need a lot of attention right now, Sheridan said, including the Second Street road project. And he’s focused on completing the project in an efficient manner and being a good steward of taxpayers’ money.

While the street’s pavement is torn up, the city will also be fixing up the infrastructure underneath it, like the water lines, sewer lines and storm water system.

“Nothing makes local government look any more foolish than when one department paves the street today and tomorrow another department cuts across it to put in a water line,” Sheridan said.

Making sure taxpayers are satisfied is high on Sheridan’s list of priorities.

“It’s really important to provide the taxpayers a reasonable return on their investment, he said. “Nobody likes paying taxes, but if you believe you’re getting your money’s worth out of what you pay, I think that makes all the difference.”

As for now, Sheridan is not planning on making any big changes in his department.

“I think it’s very important to learn how a community does what it does and why it does it,” he said. “The best approach is to listen and learn for at least six months and sometimes a full year because the responsibilities within a city obviously change with the seasons.”

Each department handles a given situation a certain way for a reason, Sheridan said. That doesn’t mean there isn’t room for improvement, but “before you start changing it, I think the more you know, the better.”

In his free time, Sheridan likes to spend time with his family. He has a 3-year-old granddaughter, Genevieve, and an 18-month-old grandson, Ezekiel, “so going to see grandchildren is a high priority,” he said.

Sheridan also enjoys reading and going to the movies with his wife.

“Growing up as a kid, that was a big treat — you go to the movie theater,” he said. “Now you can watch almost every movie on Netflix or Hulu or whatever. That’s just not the same. I still like going to the movies so I love that we have this beautiful movie theater.”

The city manager said he’s not sure he had a favorite movie this year, but as for books, he just finished reading “Day of Empire: How Hyperpowers Rise to Global Dominance – and Why They Fall” by Yale Law School professor Amy Chua.

“I’ve got several bookshelves full of books and so I typically am reading a couple of different books at any one time,” he said.

While Sheridan plans to be in this role in Webster City for many years to come, he still knows what he wants to accomplish in his time here.

“I would think that when the time comes (for retirement), that the town is in a sound fiscal position,” he said, “(My goal is) that the infrastructure has been maintained and upgraded as appropriate and that the residents are, for the most part, happy with the services that the city of Webster City provides.”