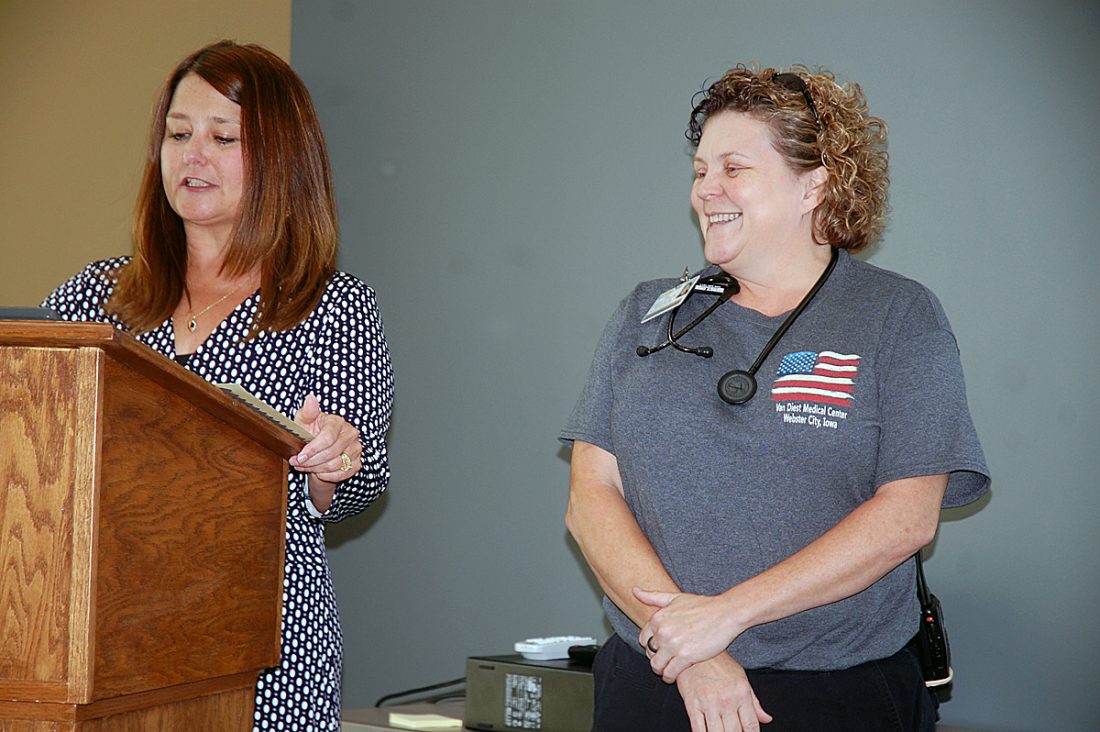 Andi Dyer, who has worked at the hospital for 17 years, was named one of the 10 Hospital Heroes from across the state who will be honored at the IHA Annual Meeting Oct. 9.

The Iowa Hospital Hero Award was created to recognize and promote hospital employees who contribute courageously and selflessly to Iowa hospitals. Since 2007, more than 100 hospital employees have been honored and only 10 recipients are selected from across the state each year.

“Through the Hospital Heroes program, the IHA shares the stories of their employees and honors their outstanding work and dedication,” Ridge said.

Lisa Ridge, chief executive officer at VDMC, made the announcement in front of Dyer’s co-workers and members of the management team. She cited Dyer’s skills as a paramedic and also spoke of her connection to the community.

“Andi is not only an outstanding paramedic but she also connects with the community by donating her time as a volunteer at first aid stations and other civic events. She can be found passing out ice cold water to the community members young and old on exceedingly hot summer days to encourage hydration,” said Ridge.

In March, Dyer was presented the CARES Award. Ridge said the employee recognition award is “aimed at capturing those incredible moments in which our staff demonstrate the core values to one another, to our patients and to our families.”

“In the eye of the storm, Andi stood out,” Markwardt said in her CARES nomination letter. “I watched her talk to him and caress his hair and tell him everything would be ok.

“I watched her step into the role of caring for my little boy, like I would – like a mom does,” Markwardt wrote. “That was worth more than money could buy.”

Ridge said Dyer was not only a hero to the Markwardt family, but to many others throughout her years of service with the hospital.

“She has saved countless lives and touched the lives of both patients and her peers,” Ridge said. “She is truly our hospital hero.”

This marks the second time in as many years that VDMC staff members have been honored with the award. In 2018, Dr. Subhash Sahai was named a Hospital Hero.